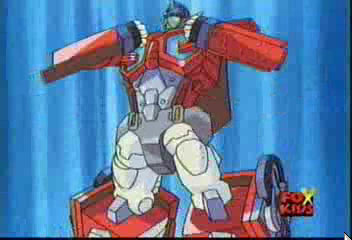 124 captions have been posted for this image so far ...

"no no no, must be tougher! more moving parts, you suck get my agent on phone im moving back to toei!"
Octocon writes: prime has fit of rage at producers when he sees how his new fire truck mode transform.

"no no no, must be tougher! more moving parts, you suck get my agent on phone im moving back to toei!"
Octocon writes: prime has fit of rage at producers when he sees how his new fire truck mode transform.

"no no no, must be tougher! more moving parts, you suck get my agent on phone im moving back to toei!"
- Back to top -
Tiedye writes: Optimus- "WOOOOOORRRRRRRR!!!
HOTROD- "Optimus, What the SLAG are you doing!?!
Optimus- "When Optimus Primal beat his chest, Everyone thought he looked cool and tough.
HOTROD-"Yeeeah. Thats because the guy had a beast mode.... and he
Silver Wind writes: OP finally went off the deep end after reading too many stupid "jokes" about nipples, monkeys, and something about a "chicken dance".
Rebirth Megatron writes: After many exausting weeks of research Prime finally figures out how to go Super Saiyan...and realises he'd need to be a Saiyan for that to work.
Unknown writes: The crackers, Gromit! We forgot the crackers!
tian17 writes: me mad! me stomp!!!!!

[King Kong has finally met his greatist rival]
Roboto750 writes: Jeez, I guess even Prime has joined the stomp team now!
Voyager Prime writes: RiD Optimus Prime: Gary Clark not Prime! Me Prime! See, me got windows in chest! Not him! ME!!!

X-Brawn: Guess he got in the high-octane energon again.

Sideburn: Tell me again why we keep that around?

Ultra Magnus: Well, you know what to do. (Au
trailbreaker writes: "Check out my boobs!!!!"
Pokejedservo writes: RID Prime (thinking): I don't have a Matrix nor am I beast-based at all, what good is my chest for anyways?
Darth Zax writes: TRUKK NOT MUNKY!!!
- Back to top -
shadow minicon writes: This is what happens when you watch too much chicken run and you find that the tape is only half recored.
Cesium_Salami writes: Thorg hungry! Thorg want eat!
Unknown writes: Why does everyone think I need anger mangement?! Look I'm calm! Were's Bumblebee I need to kick someone's ass.
Road Turtle writes: Horribly mutating the Chicken Flu, Megatron successfully downloads it as a virus into Primes CPU, and behold! The CHICKEN DANCE VIRUS!
Road Turtle writes: I'm a rooster on the farm
Cock-a-doodle-doodle-doo

There's a comb on my head
Cock-a-doodle-doodle-doo

I can lay you many eggs
Cluck-cluck-cluck-cluck-cluck-cluck-
shadow minicon writes: This is optimus when he has had too much to drink.
Optimus: Cluck, cluck i'm a chicken!
Blitzwing the warrior writes: *tarzan yell* uughaaaaaaaaaaahughaaaa!
Vampire Hunter writes: Optimus is trying out for the part of Tarzan in the new Tarzan movie..
Jubba writes: I feel like chicken tonight...
snavej writes: In the giant tanning booth, parts of the Autobot leader were turning bright red but, mysteriously, other parts were turning other colours. Wheeljack spent years trying to explain the phenomenon.
- Back to top -
snavej writes: Grey underpants were not such a great look for their leader, so the other Autobots confiscated his super mode sections. Prime beat his breast in frustration.
cryoknight writes: OP:look at my hands they are so huge and the walls they are flowing blue
Prowl: crud he got into the "special" energon again
OP:i feel like i can understand everything i am everything i see the universe........man i am so freaken hungry
overdrive writes: thick scottish accent : look at my sexy body! oohh you're feelin frisky cos ah'm dead sexy!
shadow minicon writes: Optimus: Me Prime Smash

Megatron: He's at it agian

Optimus primal: I think he has been watching too much tarsan or beast wars ether one can set anyone off like a rocket.
Heavy B writes: wait a minute...im not a monkey any more, am i?
Unknown writes: omg! my nipples are showing!
Dclone Soundwave writes: Oooh aaah aahh, look at me, I'm the next Optimus Primal even though he was destroyed in BM!! Oh Sh*t!! My spark was transported to an AU!! Great, I get to be stuck in the body of ne of the worst Primes!!
Zeedust writes: TRUKK NOT MUNKY'D!

"Ow! My continuity!"
Kevinus Prime writes: "...and if you order my tapes today, you can have pecs like THIS!"
Kevinus Prime writes: "Can't ....lift...two ton....legs....ARRRGH! HERNIA!"
- Back to top -
Kevinus Prime writes: "God, I HATE when all my armor doesn't come back from the cleaners..."
kataridragon writes: Optimus>> AHHH Titty Twister. How dare you use such evil diabolical tactics megatron
nothingface_prime writes: Prime: Tarzan yell!
Magnus: Uh, Prime? It's only funny if you actually [i]make[/i] the Tarzan yell... not just [i]say[/i] "Tarzan yell."
Optimusizzy writes: I challenge Cybertrons Prime to see who is the better fire truck
1337W422102 writes: "Gah! My cartoon and toy line sucks moose balls!"
Evil Phil writes: Dang it, I'm doing it again. I miss being a monkey
snavej writes: Why do I have glass on my chest? It always breaks in the first five minutes of any serious conflict. One day, the fragments may hurt an innocent child. Perhaps plastic sheeting would be better? No, that might suffocate a passing hungry goat. Quartz c
snavej writes: This version of Optimus Prime has very short legs and has to stand on two red boxes to reach a decent height.
snavej writes: The audacious maracas thief strikes again. Optimus is left empty-handed in the rhythm section of the carnival band.
Whelpd writes: Optimus beats his chst to call optimus primal o help him fight when he realises that he hasn't been created yet
- Back to top -
Samsonator writes: Optimus Prime attempting Hulk Hogan's famous shirt rip, just moments before he notices he doesn't wear shirts.
kingd16 writes: Yo Megs, You want the matrix? Then you gone have to take it from me. What you waitin for, it's right here behind my six pack windshield.
Roadshadow writes: Prime: Ook ook! I'm a monkey!
Optimus Primal (Offset): And he's a Prime HOW?
Zeedust writes: And now, for your listening pleasure... Okay, so maybe just because we get a kick out of this... We present: Optimus Prime, singing in the shower!
Giga Prime writes: "If I had nipples, they would be right here.
Powermaster Jazz writes: The Matrix: HEY!! OW!!!
omega wing writes: Optimus suddenly relaised he was in the wrong series
NOBODY LOVES WHEELIE writes: Optimus Prime, "Hey, you know what they say... See a broad, to get that booty yak 'em."

Megatron: You've been wacthing trazan angain havent you?
Autobots*Anime sweatdrops*
Decepticons:*shakes heads*
teejimusprime writes: Optimus: me prime kick butt
Grimlock: no me grimlock kick butt
prime: yeah i was making fun of you
grimlock:me think prime got screw loose
Unknown writes: I can't take this Matrix Envy!!!
Velos writes: Me Optimus, You Jane!!
Dinobot Prime writes: Are those... are those MY hands?
Dinobot Prime writes: CLEAR!
D-340 writes: OP: "Guess we all know who won the 'TRUKK NOT MUNKY' arguement. HA!"
- Back to top -
transformerguru writes: Prime: And this is how you do the Chicken Dance...

Kup: Oh no, not the dance moves again.
Decepticlone117 writes: MAXIMAL'S ROLL OU....OOPS SORRY! WRONG QUOTE HEHE
Decepticlone117 writes: OPTIMUS PRIMAL! MAXI........DAMNIT!....LINE!?!?
Transfaner writes: We're robots and don't have organs therefore can't get cancer. But you do, and you can.
Rolltide writes: Oh my dear Primus these new Whipers make my nipples itch something awful......X.B get over here!!!!!!! and bring a stick!!
Acelister writes: Trukk not Munky? Trukk AND Munky!
Autobobby1 writes: Optimus grunts and yells like a Gorilla.

Prime: Woah, Deja Vu.
Unknown writes: OP: What do you think guys? They should've casted me instead of Gary Chalk right? Right?
Autobots: ....sure, whatever you say Prime.
SeekerInAFakeMoustache writes: Optimus finds and reads (or attempts to read) one of Flourish and Blott's missing copies of "The Invisible Book of Invisibility."
New Omen writes: I'll show that Cybertron Prime...

X-Brawn, "Ughhh Prime you do realize we're not in Beast Wars right?"

Prime, "Ah.....damn it W.A.R.S. did you switch my script again?"
Unknown writes: Why the hell am I Firetruck?! Oh my God Roller? Were are you little buddy? Nooooooooooooooooooooooooooooooooo!
Oh hell Lucas is gonna' sue me now.
dabattousai writes: Optimus: Are you ready to witness a power of a Super Saiyan

All: ...
Zeedust writes: 'Optimus: "Hey, Smokesecrrened! My voice actor is Neil Kapalan, I'm the only Optimus since G1 NOT voiced by Gary Chalk! DO YOUR FREAKIN' HOMEWORK, FANBOY!"

Side Burn: "Taking this a little too seriously, isn't he?&qu
SilentBlaster writes: Prime: Open darnit open!
Sideburn: I think he had little too much energon at the party.
ReinaHW writes: Prime - "Maximals, maximize!"
X-Brawn - "Not again, you're Prime, not Primal! That's in another universe!"
P - "Oh...oops. Sorry, having the same voice as before does that to me. Autobots, transform and roll out!&qu
snavej writes: Optimus lives behind a waterfall...

'I may be going prematurely rusty but I sure feel refreshed in the morning!'
snavej writes: Where did all these blue lines come from? Can someone please switch off the projectors?! We're trying to save energon, you know!
Death-Ray Charles writes: Prime: I am an important CEO, and my BOLTS should be cleaned!!!
O. Prime writes: Wedge: "No no no no no. Prime, you gotta put one hand under your armpit. The only fart noise coming from a pose like that is the ones we can't make."
- Back to top -
mr_rich writes: Optimus attempts the dreaded chicken flap attack with little success
Acelister writes: Woman: "Excuse me, Optimus Prime, I just slashed your tires."
Prime: "RARGH!"
X-Brawn: "Hehe, that never gets old..."
1337W422102 writes: So he was supposed to be Primal? No wonder he was so ugly.
Silver Wind writes: Optimus Prime's reaction after experiencing a prank meant for another 'bot...
Shadow of Lio Convoy writes: Im the new King Kong or Optimus Primal!!!!!!!!!
snavej writes: Trukk not munky! [Oogaboogabooga]
soundwavegt writes: Now light our darkest.... Damn!!! I knew I should've had my chest mechanism serviced!!! Open up you stupid.......
soundwavegt writes: UAAAAAAHHHHEEEEAAAAAHHHHEEEEAAAAAAAHHHHHEEAAAEEAAAAAHHHH!!!!!
MechaRaptor writes: Optimus Prime:'Why must I wear these silver daipers?!'

Looks to the right-bottom of the screen

Prowl:for the last time Optimus RID is not related to Beast Wars!

Ultra Magnus:and they wonder why I wish I was leader
Ultra Prime writes: Me Prime! Me Smaaash!
- Back to top -