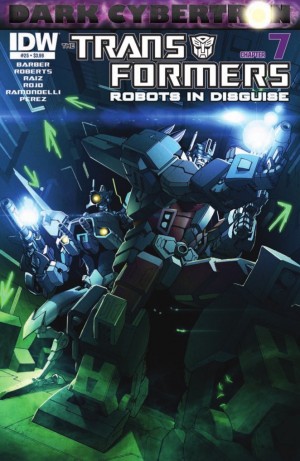 Courtesy of IDW Publishing, we bring you a full preview of this week's release, featuring the seventh chapter in the Dark Cybertron crossover event: Robots in Disguise #25! Check out the images below, and come back tomorrow for the Seibertron.com review.

Eee-hop. We've passed the mid-event hurdle, with last week's issue of More Than Meets the Eye, and the seventh chapter of Dark Cybertron actually does tend upwards again (well, plot-wise - the characters do a lot of down-wise stuff). After the big spoilers in the solicits for post-Dark Cybertron, let's take a look at how James Roberts and John Barber are going to get us there, shall we?

The Lost Light crew are running about all over the place, be it the insides or the outsides of Metroplex, with Ammonites in pursuit. We get a quick look at Crosscut too, who features on the B cover, and whose toy accompanies the issue. Admittedly, the introdump was a bit odd, but the resolution in the following panels made up for it.

The Dead Universe developments are quite interesting, but more in terms of what they set up than what actually happens. The Nightbeat exchange felt a bit lacking, and the resolution very sudden - or rushed, even. But we do get to see Rodimus' hand, which only leaves more questions.

The happenings on Cybertron are really interesting, with Galvatron being shown off amazingly by the writers. Scoop is filling in a bit more of a role, even if it is the same one, and Starscream is coming out quite badly from the whole thing. There is so much teased, in a good way, in this issue, that it feels terrible to have to wait!

James Raiz is still on Lost Light/Metroplex duties, Livio Ramondelli on Dead Universe and Atilio Rojo on Cybertron. And wow does Rojo shine - his Galvatron is magnificent, with some exceptionally over-dramatic poses and postures. Raiz is still as strong as we've come to see him by now, and Ramondelli's take in the DU is good, though the weakest of the three in this issue, admittedly.

Josh Perez on colours does a magnificent job of capturing both burning Cybertron and swarming Metroplex and the planet around it, with some pretty spot-on light/dark play. Ramondelli in the Dead Universe has some clean, clear colours, keeping the art nicely visible and uncluttered.

Gilberto Lazcano is still doing some pretty impressive stuff on lettering, really complementing the panel work by the artists and Perez' colours. And again, we get two variant covers: one by Phil Jimenez and, returning, one by Andrew Griffith - some great art right there.

As I said above, the Dead Universe plot is the weakest of the four (Starscream, Galvatron, Metroplex) running so far, but still manages to leave me wanting for more. This issue finally seems to have found its grounding in the serialised format, too. And be ready for those final pages. You have been warned.

I, for one, am hooked

The three styles of art work well, once again, and I had no issue at all with how they worked with each other. Perez and Lazcano work amazingly with Raiz and Rojo, and Ramondelli blends in nicely with some . Fine. Dark Cybertron, you really have my attention now.

Why did they start calling Slag "Slug?"

Slag is slang for whore in Canada, Great Britain, Australia and New Zealand, so Hasbro decided to drop the name. For a while they just slapped the name Snarl on him, but now they settled on Slug, which has a similarly fitting meaning as his original.
And welcome to the drama we've had in this fandom since 2008.