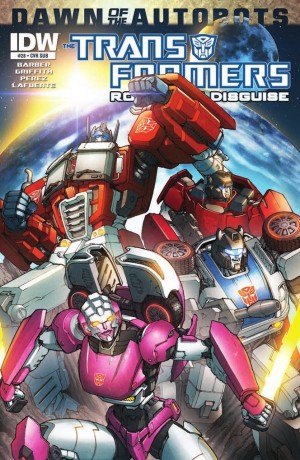 Down to Eart(h)
(Spoiler free-ish)

Synopsis
EARTHFALL! The AUTOBOTS return to Earth—with OPTIMUS PRIME in command! But what brought them back—and what terrifying secret do the humans hold? A bold new era begins here!

Here we are again, on this blue planet of ours. This round, blue, beautiful, peaceful planet of ours: Eart(h). Which is not that peaceful, or round for that matter, or happy to see any more robots after what happened last time robots were around - yes, All Hail Megatron and the 2009 ongoing. Bit of a mess for everyone, really.

Here's a recap, for our viewers at home

John Barber goes back to wearing his writing hat, and back to the Robots in Disguise cast as they see their ranks shifting a little. We get Optimus Prime leading a new team of Kup, Prowl, Jetfire, Arcee, Skylynx, Jazz, Cosmos and Sideswipe - so maybe not entirely the same cast, but it's one with good tensions and chemistry so far. And Prowl being his usual. As usual.

The dialogue seems to have lightened up from pre-Dark Cybertron RID, and there is definitely more action, a lot more action, even in the flashbacks scattered throughout the issue, taking place after the first few pages. Pages that feature some glorious fanfiction screenplays written by none other than the only (?) Cybertronian left on Earth last time round: Thundercracker.

Handsome as an F-22 jet fighter

Good dialogue, nice selection of cast and interactions, really nice set-up with both the Cybertronian past, Alpha Trion showing up as a potential goal for the cast, Thundercracker's presence and Earth's inevitable hostility towards incoming Cybertronians. The mix so far is actually pretty good, and everything has freshened up a lot since the Cybertron days!

The artwork duties, for both pencil and ink, flashbacks and present-day settings, are with Andrew Griffith. And my, do his robots and Earth shine. The -ation styled Thundercracker is impressive, and there are so many full page panels in this issue that I'm left in awe at the likes of Skylynx, spaceships, planets, cities and.. well, you'll see. Though I am left a little wondering about some strangely shaped human faces, especially in a couple of Marissa's shots.

Here, have a Metroplex

Colour duties, on the other hand, are split between past and present, between Joana Lafuente and Josh Perez. But they both equally shine their own glossy, refracting, shaded light on their own respective sections. Lafuente's Cybertron looks gritty and grainy, with lasers pewpewing through everything, while Perez' Earth has the right amount of ominous shadows and glorious natural hues.

And a good old purple-badged Megatron, too

The lettering duties fall with Tom B. Long, and dutifully and sparingly does he deliver sound effects and fonts. There are some really good WRUNCH and RUUUUNCH sounds later in the issue. We get three covers again, too, with Griffith and Lafuente on B, Casey Coller and Lafuente on A, and the RI interlocking variant cover by Livio Ramondelli - most of which featuring the big blue face of Optimus Prime.

Starting again almost afresh after Dark Cybertron? In my opinion, it works. It gives Barber and the Autobots a new playing field, a credible threat, complex negotiations with Earth and the possibility to make the running joke of robots being unable to pronounce trills and fricatives (you try, without lips or teeth or tongue). And it's still connected to what has just happened with Dark Cybertron, and some nice references to earlier stuff (and Megatron's trial, which we'll finally see in MTMTE #28).

The art crew do some impressive teamwork, too, with Griffith's art only slipping a couple of times, but showing off some amazing skill everywhere else. Add Lafuente and Perez' colours to all of that, with their slightly different hues and tones, top it off with good lettering - it's a comic worth reading, looking at and definitely buying. I am not concerned about the Earth setting at all, if this is telling of what will happen.

I read it twice!

Obi-Wan would be disappointed.

What I find interesting is that Galvatron, in IDW continuity, always considered himself to be from a more...civilized age.
Re: IDW Transformers: Robots in Disguise #28 Review (1568049)
Posted by Stormrider on April 23rd, 2014 @ 6:24pm CDT

Obi-Wan would be disappointed.

What I find interesting is that Galvatron, in IDW continuity, always considered himself to be from a more...civilized age.

Me, too. It spun an interesting take on the character.
Re: IDW Transformers: Robots in Disguise #28 Review (1568136)
Posted by craggy on April 24th, 2014 @ 4:25am CDT
I thought it was quite good. It's strange that the book with Prime in it should be the main title, but when I saw a new TF book was out, I was a little sad when I realised it wasn't MTMTE.

The new/updated cast is a bit of a hodgepodge, but quite interesting and strangely makes sense. They're all quite businesslike. When Kup is the guy most likely to goof off, you know you're running a tight ship. Orion Pax was only on the Lost Light for five minutes but he clearly went for the exact opposite when rounding up his crew here.

It'd be nice if Thundercracker sticks around for a while, but surely it's only a matter of time before he gets his big break and moves to Hollywood?

Gotta say, I did not see that twist coming at the end. And wow. I hope that Galvy design is from an upcoming toy...not because I'm 100% sold on it, but because otherwise the Tank Backpack seems inexcusable. I do kinda like that he's got toy/comic colours though.
Re: IDW Transformers: Robots in Disguise #28 Review (1568213)
Posted by Nemesis Maximo on April 24th, 2014 @ 9:17am CDT
That was a cool issue. Like the pre-dark Cybertron run of RID, I'm reminded of Furman's -ation series.

I know many (myself included) feel his writing has fallen of the cliff, but I still enjoy those early IDW mini-series, especially how the "Robots in Disguise" theme has an actual purpose.
Re: IDW Transformers: Robots in Disguise #28 Review (1568379)
Posted by craggy on April 24th, 2014 @ 3:42pm CDT
is there any reason the Cartoon and Comics forum doesn't have a stickied comics discussion thread, but there is one for Prime which finished ages ago and one for Go! which probably about 4 people can even understand, let alone like? (the toys are ace, and some of the animation is nice, but the show is a bit...well it's not to my liking)
Re: IDW Transformers: Robots in Disguise #28 Review (1568403)
Posted by Va'al on April 24th, 2014 @ 4:37pm CDT
The only reason I have is that it makes it easier for me to have a thread per issue, then one for the TPB. By all means, feel free to start one if you think it'd work!

So all the discussion about one issue is kept within the same thread, as it builds from the early news about it up to the review!