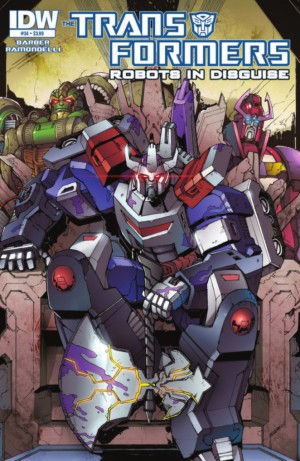 The second IDW Transformers comic being released this week looks at a very different past, through the words and memories of unknown variable Alpha Trion - read on below to find out more about Robots in Disguise #34, including a full preview, and head back later this week for the Seibertron.com review!

Transformers: Robots in Disguise #34
John Barber (w) • Livio Ramondelli (a) • Andrew Griffith (a)
THE ENIGMA! At last… the secret origins of CYBERTRON’s golden age are revealed to OPTIMUS PRIME—and what he learns changes everything about the AUTOBOTS’ mission on Earth!
FC • 32 pages • $3.99

Synopsis
THE ENIGMA! At last… the secret origins of CYBERTRON’s golden age are revealed to OPTIMUS PRIME—and what he learns changes everything about the AUTOBOTS’ mission on Earth!

They're off to meet Michael Bay!

After a month's pause to take a look at Cybertron and whatever mess is taking place over there, we return to Earth's orbit to check in with Alpha Trion, Optimus Prime and whatever mess is about to go down here - by looking at what happened a long time ago, in a galaxy far far away... if you're new to the Transformers, that is. Though there is plenty for veteran fans, too. Read on!

The frame of the issue is the conversation between Alpha Trion and Optimus, as they take a wander over the dark side of the moon (oh-ho), to discuss important things of importance, without anyone listening in - and we finally find out the role that Trion has played since forever in the shape of Cybertron and its lineage.

Which leads us nicely into a long flashback of the early days of Cybertron, with Galvatron running around chopping people to bits and decapitating others, stabbing, slashing and generally being his usual killing machine self. The 'twist' however, is that he has a perfectly good reason to do so, and we discover just how far the Enigma teased in the synopsis goes, and what it has to do with Earth and some old frie-- ene-- frenemies.

John Barber's dialogue and characterisation in this issue are great: from Skylynx' wonderful quips, to characters calling out each other's pompous formalities, to seeds of deception and scheming planted in some key players of the past, to the roundedness of Galvatron and the deceitfulness of Alpha Trion, and that's without considering the source material being drawn upon for the flashback's plot, and really setting the stage for Combiner Wars.

In addition to all of that, Livio Ramondelli is really on top form with the artwork: there's a lighter, cleaner feel even to some of the busier battle scenes (though some make Galvatron look a bit too powerhouse-y, but that's writer's choice), there is a nice use of reference material again, in both toy form and pre-existing fiction, and some great body language deployed.

Also, the lighting and colour used for the contrast between the past and present is switched compared to usual, with dark used for Trion and Optimus' conversation on the Moon, and a lot of light shining over Galvatron's battles. Combine that with some great panel layouts, a cinematographic style of composition, angles and shots, and you have a visually pleasing issue indeed.

Tom B. Long returns on lettering, choosing some very well placed addition contrast in caption boxes and dialogue bubbles, with a smattering of great sound effects throughout the book. All serves to further identify the separation and similarity of the different stages, and it all works perfectly. The two main covers by Andrew Griffith and Josh Perez, and Casey Coller and Joana Lafuente also do a great job of hyping up the Galvatron element, and it is a great part of the issue - but don't miss out on the stunning Ken Christiansen 30th anniversary variant (thumbnail).

I have tried hard to not give away any of the major plot points, names of key characters, storylines or references, as I think this issue needs to be enjoyed as a new exploration of Cybertron's past in the comfort of personal reading. But I also believe fans of different Transformers continuities will really enjoy the various parts of fiction that are touched upon, and how Barber brings them all under the one issue.

Without leaping to conclusions

Ramondelli's art does some great things with Barber's writing, too, and accomplishes some nice visual clarity and dynamism needed for the warrior 'king' Galvatron. It also gets closer in its shading and hues as the past and present become darker and darker as they converge, with a great final sting tying us back to the running thread of RID so far. As we get ever closer to the beginning of Combiner Wars, this issue does great things to actually make me look forwards to it. Well played.

1984forever wrote:"Only a Prime can kill a Prime".

Galvatron is the missing Megatronus reformatted!