TFsource 6-6 "Back from Botcon" SourceNews 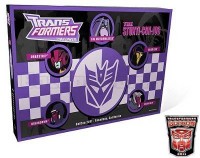 Greetings SourceFans!
We're back from another great year at Botcon! It was great seeing all of you that could make it to the show. But for all of you that couldn't make it, we brought back Botcon 2011 Exclusives! You can check out what is available by clicking here. They won't last long, so get them while they're available!

...And don't forget to check out our latest TFsource Youtube Review of 022 Fansproject Protector and Shadow Scythe Upgrade Sets!

We have limited stock of the 2011 Botcon Exclusive figures. Get them while they're available!

Click here to view all of our Botcon 2011 Exclusives!

And we still have many Exclusives from previous Botcon Conventions. You can view them by clicking here.

We have limited stock of the first wave of shipments available, those who preordered just Seeker Jet will have their preorder processed first, and there is limited stock leftover to fill additional instock orders! With any luck, we may even have a few leftover for Botcon...

Check out the new photos of the final product here!

We also have the other iGear seaker jets available for preorder!

This great two pack comes with Transformers Prime & Megatron in an all new black color scheme and a limited edition two pack, only available at the Tokyo Toy Show! Preorder yours today, set for a July release!

CDMW-06* Preorder Up! This custom resculpted head piece is made of polyac virgin ABS, includes a gold visor and takes your Superion to the next level! Set for a June release, this is one of the more affordable Devy pieces as well!

Also up for Preorder: CDMW-22 Custom LED Head! Take your Menasor to the next level with this resculpted head piece, that includes a switch activated LED light up red eyes! Also set for a July release, and goes great with all of the other Devy Menasor/Stunticon pieces!

Now up for Preorder: CDMW-23 - The Kings Power Parts - Articulated Fist Set! Take your predaking to the next level, with this set of Upgraded articulated hands with movable knuckle clusters, enabling 90 degree back and forth movement. And with a hidden bonus, allows you to hold your CDMW-14 more tightly. Set for a July release!

This set has long been popular, this will be the final stock on some of these guys, so be sure to not let this great set pass you by. WST Commander, Flamethrower, Snarl, Jungle Warrior and bombardier, all together for one great price!

Very limited numbers of this figure floating around, we have limited stock available for sale, and will bring a handful of pieces to Botcon so be sure to stop by early if you are looking for one!

The perfect add-on to your e-hobby Kup, or an all new dark bluish color scheme, including a cigar! This kit even comes with your own screwdriver to perform the necessary operations! Instock, along with a restock of the Kup 01 head, and the H01 heads for Masterpiece Prime, all from iGear!

Freshly arrived in our warehouse, restock of the popular Quints, Spike & Sparkplug, and Spike and Daniel Exo-Suit Sets! Just in time for picking these guys up at some great prices, online or in person at Botcon - Don't forget to stop by our booth!

This popular Masterpiece figure from a couple of years back is getting another chance with this re-release! An impressive piece to behold, the legendary Dinobot Grimlock himself once again can be had, set for an August release!

The perfect add on to take your Masterpiece Megatron to the next level! Includes, scope, barrel, stock and die cast leg plates to give Megs some meat to those legs, goes great with the recently released MP-05 Masterpiece Megatron, both instock today!

We have put up preorders for the Leader Class and select other figures, including Optimus Prime, Bumblebee, Starscream and More! Note: Hasbro is saying there may be a shortage on some of the figures, so we are warning everyone in advance we'll do our best to pick up as many as possible!

TFsource.com - Your Source for Transformers Dark of the Moon Toys!