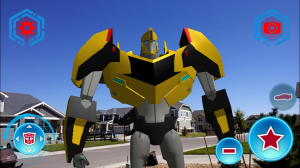 Seibertronians, thanks to user Collectotron, we've been alerted to a brand new Transformer Augmented Reality mobile game that has seemingly slipped under our radar, called Transformers AR Guide. It's based on the new Robots in Disguise animated show, and is developed by Red Frog Limited LTD. I've decided to look a little deeper and try it out for you!

NOTE: What I will be reviewing is the trial version of the game, meaning some features will not/can not be covered in this article. I will address this more in a bit.

First, some technical info about the game: It's Augmented Reality based, meaning it features the ability to superimpose a digital character into the real world through your mobile device. The AR is triggered by a physical book that you have to buy separately for around $10. The app, however, allows you to demo it with a printable image that will allow Bumblebee to appear on your desk, living room, or anywhere else you want him to.

Initially, I was skeptical of the game, and the somewhat convoluted process of getting it to work (I had to download the page, change the file type, email it to myself, and print it out) was kind of off-putting, but I kept positive, and saw it through.

Let's look at the game's features.

The main attraction is the AR gimmick, so let's look at that. The book allows you to cue up quite a few autobots and Decepticons into the real world, but the printable only gives you Bumblebee, as mentioned above.

I was pleasantly surprised with the amount of controls you can use on Bumblebee. You can make him walk around, pose, transform into his car mode (you can even turn his headlights on and off), almost like a digital RC car. Frankly the coolest feature is that you can even make him life-sized, if you have a big enough space. You still have complete control over him even in Life-sized mode, so if you want to have Bumblebee walk down your street, you can!

Bumblebee's on my driveway!!

It's also pretty cool to have Bumblebee on while playing with real toys at the same time. It adds a whole new layer of animation (quite literally) to your stories.

Another feature allows you to create your own custom charcter, that you can then superimpose into the real world as well. I made my own character, but wasn't able to "bring him to life" because I, obviously, didn't have the book.

Hey! RID Windcharger!
My one critisim here would be that I wish you could get into more detail in the customization process, not just solid colors on various body parts.

The third feature is Battlemode, but I wasn't able to demo this at all. It looks very interesting, however, being a two-player AR fighting game.

So some final thoughts: I didn't expect much from this game going in, and I was very pleased and impressed with what it turned out to be. It's a lot of fun, and a great implementation of this tech, and I'm almost postive I'll be getting that book very soon.

Wanna try it for yourself? It's available now on the App Store and Google play for most devices for free!

And, as always, keep it here on seibertron.com for all your latest Transformers news and reviews!

Kurona wrote:This is pretty much the start of every mobile game developer going "Pokémon Go is amazingly popular let's copy it" isn't it

Kurona wrote:This is pretty much the start of every mobile game developer going "Pokémon Go is amazingly popular let's copy it" isn't it

Yes and No. Augmented Reality has been a "Thing" for a while. Companies like Oculus have been chasing that venue alongside their VR pursuits and its been used to some degree to drive things like walkaround guided tours at State Parks.

What Pokemon did successfully is make it simple and engaging enough, and with a brand that everyone is familiar with to some degree, that it put AR gaming on the map and in everyday consumers' hands. Much the way Steve Jobs succeeded in making the Smartphone something that people suddenly wanted, and not just a tool of the ultra techy rich business entrepreneur,