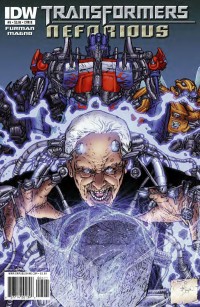 We get a little teaser of Transformers Movieverse Comic action, as the fifth issue of Transformers: Nefarious is previewed by Regulon Four. This six-part series is about to come to an end, so check out the comic's description, covers and a snippet of the preview below.

The full scope and scale of The Initiative’s grand plan—some eighty years in the making—is revealed, and the pooling of AUTOBOT and DECEPTICON forces may just be too little too late. Armed with his very own Allspark, Carter Newell has nothing less than total annihilation on his mind! Check out the rest of the preview over at Regulon Four. You'll find Transformers: Nefarious #5 in your local comic store this Wednesday.

Keep it at Seibertron.com for the fastest Transformers news on the net! <