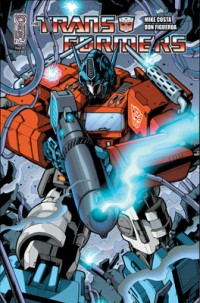 While reaction towards IDW Publishing's Transformers #1 has been mixed at best, the sales numbers apparently are much more positive. The following is a press release directly from IDW.

The first ongoing TRANSFORMERS comic series in five years, The TRANSFORMERS is a must-read for old and new fans. The TRANSFORMERS #1 starts the series off with two huge events - the death of IRONHIDE and subsequent resignation of OPTIMUS PRIME, the heroic leader of the AUTOBOTS.

"Launching an ongoing series based on a world-wide franchise like Hasbro's TRANSFORMERS brand is not something we take lightly," said Andy Schmidt, IDW's TRANSFORMERS editor. "We know we have to make every issue count so that our readers are getting a great read every time and that our retailer partners are assured that they've got a product they can sell month after month. And this second printing is evidence that Mike and Don have succeeded at delivering exactly that."

The TRANSFORMERS is helmed by Mike Costa (G.I.JOE: COBRA) with art and covers by returning, artistic dynamo Don Figueroa. The ongoing series is also the launching point for two new miniseries, TRANSFORMERS: BUMBLEBEE and TRANSFORMERS: Last Stand of the WRECKERS, debuting in December and January, respectively.

On the flip side I curse my job for working so many hours- I missed out on a first printing.

Re: Transformers Ongoing #1 sells out, second printing to be released December 2nd (1021326)
Posted by Ultra Magnus on November 20th, 2009 @ 10:12am CST
Yep I got it and I'm waaay into it. Especially since Magnus is s'posed to appear in the 3rd issue! Besides; we know OP isn't gonna "Quit" forever... it's just like the "Spiderman No More" story. Nay-Sayers can lick the Lube off my Bearings! This is going to be a very engaging Transformers story; just as IDW has always delivered. Stop hating for hate's sake and just enjoy the fact that Transformers is being taken Seriously in this medium. Jeez.

Now to wait out the LOOONG month till next issue!

Re: Transformers Ongoing #1 sells out, second printing to be released December 2nd (1024398)
Posted by Mechabreaker on December 2nd, 2009 @ 10:25am CST
First of all let me say that it's good to be back after a long hiatus that I took because I have been so busy with school and work lately, but I am back again, and I'm not going anywhere, anytime soon. Anyway, on to the topic at hand. I really liked this issue, despite the reservations that I had regarding the artwork, I will, however, say that it is growing on me, albeit slowly, but I really liked this issue, the story was very engaging and even though I knew it was going to happen, Ironhide's death was still a jaw-dropping occurrence for me. I can't wait for issue 2, the Bumblebee miniseries and Last Stand of the Wreckers to come out, I need my TF comic fix stat!