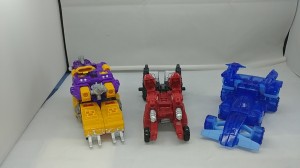 Thanks to our fellow Seibertronian Chuckdawg1999 we have a video review for the Transformers War for Cybertron Siege Amazon Exclusive Fans Choice 3 Pack with Impactor, Powerdasher Aragon, and Holo-Mirage! This is extra fun as Chuck has kindly included comparisons of the new bots with their retail released counterparts namely Cog, Mirage, and Autobot Impactor. Heads is the order of the day as aside from the extra paint and translucent plastic, each is featuring a completely new head from their previous versions. I'll let Chuck do the rest of the talking:

"Hasbro gave fans a chance to select two characters that would be featured in a battle pack. Mirage and Impactor won and as a bonus we got what was probably intended to be the first Powerdasher, Aragon. Well, what we end up with are two repaints with new heads and a repaint of Weaponizer Cog with a new head that people are surprisingly going crazy over. Ultimately it's up to you if the set is worth the price but I'm quite satisfied by the main retail releases of the three figures in this set."

You can find this set at Amazon by clicking HERE. So, are you sold? Admit it, for Decepticon Impactor alone you're sold, but a Cog Weaponizer in red to go with the ocean of red Autobots? Mirage as a robot in disguise, in disguise? This is yet another multi-figure exclusive from this line that cements War for Cybertron Siege's place in Transformer history as having more quality figures and obscure fan service than...well, what other lines would you say? Let Chuck know what you think in the forums and as always stay tuned to Seibertron for the ultimate in Transformers news!