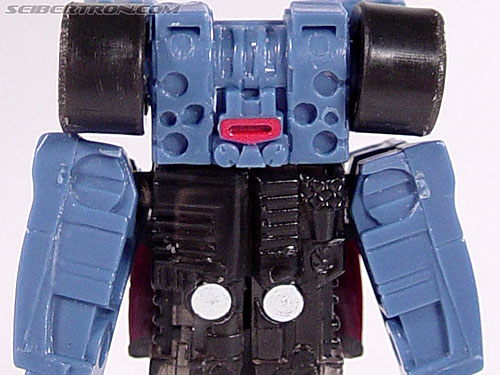 CHECKPOINT worked as an information specialist and spy for ANTI-BLAZE even before THRUST began his rebellion. His speed and talent for disguise, as well as a cluster of holographic projectors housed on either side of his head make him ideal for infiltrating enemy formations. But his real talent is his ability to get a read on a subject with minimal contact; CHECKPOINT can make incredibly accurate guesses about an individul's personality and motives after only a few moments of conversation. This talent makes him a dangerous enemy, and a valuable resource to ANTI-BLAZE and the Council of Sages.

Profile: Elected to the lower House Cosine of the Mini-Con Council of Sages just before the colloase of the star that eventually threatened Cybertron and its moon as a black hole, Anti-Blaze began his career as a obscure firebrand. He advocated complete isolation from the larger Cybertronians, even going so far as to submitting measures authorizing research on weapins specifically designed for maximum effects against the Autobots and Decepticons. As the threat of the Unicron singularity has grown, so has his star risen in Mini-Con politics. Seeing this threat as the ultimate chance to showcase the peaceful self reliance of the Mini-Cons, he led the push to organize an evactuation without help from the Autobots. Checkpoint, serving as Anti-Blaze's information specialistm worked with adventurers and scientists - including the legendary Street Action Team - to find an obscure body in the S-K System suitable for the entire Mini-Con society, with enough Energon to exist in isolation for ten thousand cycles. Scythe, given to less intellectual pursuits, managed the construction and deployment of the evacuation fleet. The entire effort took nearly six stellar cycles, but the Mini-Cons were ready for their evacuation even before the Aubotos - and Thrust managed to destroy it all in less than an hour. On the chaos that followed this initial attack - as a well-organized, well-armed insurgency broke out across the two moons of Cybertron - Anti-Blaze once again came to the fore. He took command over the shattered Council's armed forces and launched a a successful counterstrike that drove the insurgents into the asteroid field, preserving the Council of Sages, and protecting the foundations of Mini-Con society. Since then, he has proven himself a brilliant military leader, but the insurgency has a huse head start in resources. Council forces are not prepared to fight a full-scale civil war. even as they search desperately for a way to secure a cease fire long enough to flee the black hole, Anti-Blaze, Checkpoint and Scythe have become wartime folk heros. They are pressed now from both sides: Thrust and his terrorists on one side and the Council of Sages - who tolerate his military control and huge popularity only so long as he hands them victories - on the other. Left with no other options for a swift victory, he is forced to call for help from the Autobots.
Abilities: Aside from a keen stratgic mind, and a politican's powers of persuation, Anti-Blaze carries twin racks of incendiary missiles mounted on either side of his haed. In vehicle mode, he can launch a stream of chemical fire suppressant or liquid nitrogen up to 1200 feet. Checkpoint is highly intelligent and a master of disguise. His natural acting abilites are enhanced by simple holographic projectors, which allow him to mimic almost any subject with near perfect accuracy, to turn invisible for a limited amount of time, and to project simple images within 100 feet. His is alos a supreme empathic observer, a trait rare among Mini-Cons. With only a few moments observation he can make very accurate assumptions about a subject. He is a spy without peer. he can fire pulses of hardened anti-neutrinos from ports on the tops of his hands. Though it was Anti-Blaze who develops the strategies that have won the Council several victories over the insurgency, it is Scythe who perfects them. He is a masterful battlefield commander, capable of moment by moment improvisation that enables him to gain and hold control of the most chatoci battlefield. In addition, he is a match even for most Decepticons in battle. His body is heavily armored and in robot mode his hands convert into spinning Gauss cannons that fire a storm of armor-piercing sabot rounds.
Weaknesses: As a team formed through political alliance rather than core programming compatibilities, these three do not share as tight a bond as most other Mini-Con trios. Anti-Blaze and Checkpoint are comparatively poorly armed, and neither is a born fighter. In a fight, they both rely on Scythe for protection. Though they enjoy a huge amount of popularity among mainstream Mini-Con society, many among the Council of Sages resent that popularity. As the insurgency falters, some members of the Council have already begun maneuvering to discredit or destroy Anti-Blaze and his companions.
[ Back To Top ]