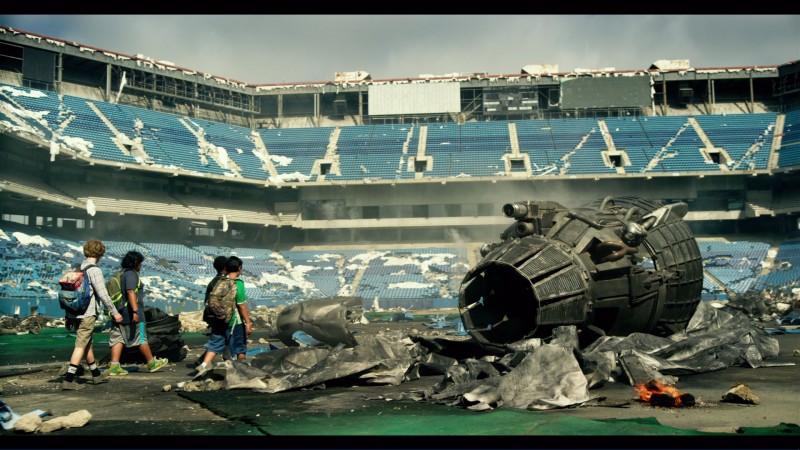 19 captions have been posted for this image so far ...

DeltaSilver88 writes: "Isn't that cannon pointing straight at us?"
"Come on, that's why it's cool to walk through it!"
"...Why do I follow you guys again?"
trailbreaker writes: Poor Browns fans.
Quantum Surge writes: I've seen kids damage next door neighbor's house windows or cars, but this is ridiculous!
Towline writes: "This new vikings stadium collapses worse then their old one!"
ksol71339 writes: STARSCREAM: " That's what's left of me? Oh well, I'll POSSESS OPTIMUS PRIME'S CORPSE instead! "
Castle74 writes: ...and despite all that Brady and the New England Patriots won yet another Super Bowl.
Castle74 writes: That last Super Bowl Half Time show got a little out of hand
TrinityIce writes: O fuck.
Decepticon Stryker writes: Looks like the Japanese government tried to capture a live Gyaos again.
Bumblevivisector writes: "Dammit, Lockdown bombed the wrong arena! Tigatron Stadium can only be built in time for Animated if Comericon Park is destroyed, not the slaggin' Silverdome!"
- Back to top -
DeathReviews writes: "This is what happens to football when you let people like that Kapaernek guy do their grandstanding..."
Bumblevivisector writes: Sensing his end was near due to poor QC on his Unite Warriors shuttle toy, Blast Off valiantly kamikazed the poster for that franchise-crippling Combiner Wars cartoon, freeing the caption contest from its months-long grip. And that's what's left of him.
#Sideways# writes: The signs were clear: Bay was near.
lonrac writes: coach is gonna blame us for this no doubt
Bumblevivisector writes: "See, told ya! This is the world after just 3 days of President Trump!"
"Yeah, well my mom says Hillary's emails woulda' done this to baseball, AND the Olympics!"
Bumblevivisector writes: "Wow, so even a space shuttle crash taking out the halftime show couldn't make this dumb sport exciting"
"Well, our afternoon's free now. Who wants to see the Power Rangers movie?"
UnderYourCloset writes: Another failed Area 51 test.
claborn writes: Hey... you guys want to see a dead body?
Powermaster Swag writes: Kid 1: This is one heck of a touchdown, huh, Billy?
Kid 2: Sure is Timmy! I ain't ever seen a football that big!
Kid 3: My Dad said that giant robots from outer space attacked this football field!
.....
Kid 1: Bobby, your dad's dumb! There are no such
- Back to top -