Kremzeek with some white foam 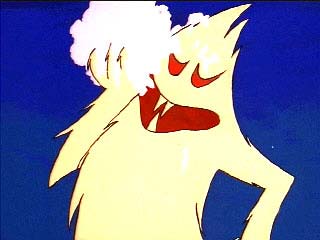 167 captions have been posted for this image so far ...

Kremzeek: "I'm so ----ed up..."
commander setinel writes: How that get there??
Greg writes: This Shaving Foam Doesn't Seem To Work!
Zeedust writes: Rabid Kremzeek! He's foaming at the hand! Run for your LIVES!
Bloodlust writes: You might want to get that ear infection looked at....
Bruticus Buckeye writes: I will crush that pretender, Pikachu, with this wad of foam!!!!
- Back to top -
Minicle writes: Kremzeek: KREEEEEMMMZEEEKKK KREMZEEEK!
Translation: GET THAT CAMERA OUT OF MY SHOWER NOW!
vinlok writes: "I was looking for scooby"
Rainbow Starscream writes: Mmmm....tastes like chicken!
DeltaOmega writes: Mmmm! Tribbles.
Mosaic writes: Sorry pal, but you just can't shave.
Com&Con01 writes: As news of the Laughing Cow's fame spreads, wannabe acts are springing up all over the country. (Note, may only make sense to UK viewers).
Kal-Seth writes: " Put some Whip cream on your cake!"
Nightshadow writes: Now kids, this is another reason why Smoking is---
Kid: Bad for you?
Kremzeek: No, good for you, this smoke is cool to hold and throw around.
turbo97 writes: so there i was with a baby seal in one hand and a ball peen hammer in the other so i did what any good person would do...
turbo97 writes: And i thought that albino kittens were just white on the outside
- Back to top -
turbo97 writes: ok class ill warn you one more time the next one to shoot a spit wad goes to the principle
turbo97 writes: see i told you she was wearing a wonderbra
NOBODY LOVES WHEELIE writes: "Alas poor Snuggle Bear I slew him so well."
shockwave_inoz writes: KREM: "Okaaaaay. Who's the JERK that threw THIS?!" All Decepticons point at Starscream, who was just idly staring at the ground, minding his own business for once. STARSCREAM: "Huh?" KREM: "You! Screamer! I'm gonna chang
Road Turtle writes: Why Kremzeek never had an action figure; he glowed in the dark and came with a jar of gelatinous white slime.
Road Turtle writes: Kremzeek or Cream-Zeek? Either way this photo looks wrong.
AirFlare writes: "I dunno, Doctor, I think i'm sick or something. At first, I stroked it, then I continued to stroke it and all of a sudden this white stuff's all over my hand. What is this?"
NOBODY LOVES WHEELIE writes: I've seen this episode,it's were Kremzeek get's his good cloths dirty rescueing Pandora the cat,and tries to wash them himself,that's when Alice and Mrs. Brady find him in the sud filled laundry room.
SeekerInAFakeMoustache writes: After seeing "A Decepticon Raider in King Arthur's Court," Kremzeek decided he was going to make gunpowder, too.
AirFlare writes: "This is the filling in Twinkies?"
- Back to top -
NOBODY LOVES WHEELIE writes: Kremzeek,"So that's what's inside of an Ewok!"
fuzzy butt writes: MAKE UP !!!!
PooF
fuzzy butt writes: when my a$$ burns, I just put a little dab of Kremzeek anal cream around my sphinter and it sooths the pain away with its new and improved bubbling action.
( warning my cause cancer, bleeding, and cravings to listen to Dianna Ross music)
Gallonos writes: My ear ache is getting really bad...
Bluevolt writes: Ah, so Monkey, your freind Pigsy fried up nicely, but he didnt squeal. Where is the Princess?
Acelister writes: Kremzeek was upset that his whipped cream supply was running low...
Acelister writes: If he looked reaaaly closely, Kremzeek could swear he saw chocolate chips.
Tryphonus writes: Cotton Candeeeeeeek!!!
NOBODY LOVES WHEELIE writes: 5/4/04 Kremzeek plays havoc with Seibertron in response for the abuse he received on The Ultimate Caption Contest.
Acelister writes: Too late he realised it was NOT new Impereal Leather Foamburst shower gel.
- Back to top -
NOBODY LOVES WHEELIE writes: There's something about Kremzeek
Ironhide90 writes: YEA moose now i can fix this wild hair
NOBODY LOVES WHEELIE writes: Did you know? Kremzeek had a rather extensive collection of cotton,weird little guy ain't he?
Gambit's Mind writes: is this the reason they tell you not to scratch a rash?
Castle74 writes: Our worst nightmare.....a rabid Kremzeek! Look he's already foaming at the mouth!!
NOBODY LOVES WHEELIE writes: "Kremzeek Car Wash,wash and wax your car only $5 after 4pm,includes Full service wash and wax,Armorall of tires dashboard and inside door panels,free vacuum service on all carpets,and popcorn directly from Kremzeek's ass for all kids under twelv
NOBODY LOVES WHEELIE writes: "HEY!WHO THE HELL RIPPED OUT DAVID HASSELHOFF'S BRAIN?!"
"And your eating it? Good job Kremzeek!!!"
NOBODY LOVES WHEELIE writes: "HEY!WHO THE HELL RIPPED UP MY COUCH?!"
"GRRRRR...DAMMIT KREMZEEK!!!"
Firewalker writes: No, you fool, don't eat the cocaine- you snort it.
Flashback writes: Gonna wash that man right outta my hair...
- Back to top -
TheRoMan writes: At first they shot at him with thier weapons. Then they dragged him through the streets of Japan, flogging him and pelting him with foam. He was just an innocent creature, but that didn't matter to them. They finally crucified him on a tower until hi
Gambit's Mind writes: Yeah and I've got white fluffy cotton comming outta my a......oh wait, I do..
thexfile writes: we spotted kremzeek in his preparation for the transformer olympics... we think that kremzeek is a bit confused about the shot put,insn't that suposed to be an iron ball instead of a foam bal zeekster ??
NOBODY LOVES WHEELIE writes: Night of the Living Dead Kremzeeks

Sorry I knew it wasn't that funny.
Shinju-chan writes: **Is trying to go for PG-13** Ummm mmm ... damn! I JUST CAN'T!!
NOBODY LOVES WHEELIE writes: Chicks dig Kremzeek,he's double jointed!
DeceptiGojira writes: Kremzeek loves to cum (worst hentai EVER¡¡)
Mkall writes: "Hey I thought this herbal essance junk was supposed to give my hair more body and life. As you can see, it's all false advertising."
NOBODY LOVES WHEELIE writes: Hey I hate Kremzeek as much as the next guy,but he swallowed a package of microwave popcorn,and proceeded to vomit some of the best popcorn I've ever tasted!
- Back to top -
NOBODY LOVES WHEELIE writes: MENTOS. The freshmaker! Kremzeek!
NOBODY LOVES WHEELIE writes: Kremzeek is Russian for bad plot device.
ArctosPrime writes: OH< MY GOD!!! What is the world coming to when such vilence caused by Kremzeeks to poor defenseless Snowmen? there was nothing left of the body that could be identified, Carl.
Happy Noodle Blacker writes: Then, Kremzeek got rabies and the **** really hit the fan.
NOBODY LOVES WHEELIE writes: 2002 Hasbro announces the launch of Armada and the creative force behind it.
TheRoMan writes: Coming this month from Hasbro...Kremzeek Commemorative issue. Of course its Hasbro so he only shoots foam. Next month Takara will release a version that shoots 40,000 volt bolts of electricity, I'm waiting for that one.
fuzzy butt writes: An angery twinkie after finding out just how the creamy filling is inserted into him
thexfile writes: they finaly did it , they made the crapest transformer eaver , only thing next wil be 1 that transforms into a turd , withe a extra smel button.
thexfile writes: you knew armade suked , but did you know that it was so bad that kreemzeek went of to do a screentest for "no wet wonder foam" unlukely he did not pas , and is stil unemployd to this day.
thexfile writes: monster : ( roaring noise ) thinking ( where are those blasted kids )

shaggy : look scoobe it's the monster run
- Back to top -
steve2275 writes: now where is that needle in this haystack
NOBODY LOVES WHEELIE writes: Proof positive that even the worst episode of Beastwars/Machines was better than Kremzeek.
NOBODY LOVES WHEELIE writes: Mmmmmmm Cotton Candy!
Binaltech Bombshell writes: "You sure this is how to use Preperation H?"
Ratbat writes: Who dares throw pie in my face?!?!
Zeedust writes: Kremzeek brand shampoo. It's... Okay, well, it's cheap.
TheRoMan writes: It was a sad day in cartoons when the results came back on Kremezeek's monthly specimen test. He was of course positve...the shockwaves could be felt all through the industry. Only days later did Arcee test positive as well, then Springer and so on.
Cliff Jumper writes: The New York recruit for ceaning up the Staypufft Marshmellow Man's remains.
Spartanion writes: "Why is this snow yellow? Blah! That doesn't taste like lemon!"
Pokejedservo writes: Kreemzeek's bad audition for "Captain Cave-Man".
- Back to top -
NOBODY LOVES WHEELIE writes: "THIS PURE SNOW! Do you have any idea what the street value of this mountain is?!"
Casual Matt writes: *insert dirty minded caption here*
bluemoon writes: MMMMMMMMMM cream filling
Ricochet writes: And you apply it like this...
TurboHammer writes: Marshmallow Cream anyone?
Jaw Crusher writes: ...and thus, in that hot tub on New Year's Eve, did Estoria's unusual love affair with Powerglide come to a horribly tragic end.
Shermtron writes: Time to shave!!
- Back to top -