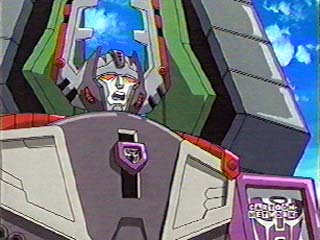 260 captions have been posted for this image so far ...

Shauyaun writes: Megs:"It's probably cuz of the mirror that I shattered it's glass"
Miester-Jazz writes: Thats it! I quit, I'm going to IDW now.
Judynator writes:
Judynator writes:
darkqueen01 writes: Megatron: *sigh* At least they got the colour right this time.
galvatron224 writes: D**N ILLUSTRATER!!!!!!!!!!!!!
Zeedust writes: "No more bar bets with Sideways. EVER."
Scatterlung writes: Starscream: heh heh heh...He'll never know...
Lich Lord Dranas writes: Just another Armada screw up!
Roadshadow writes: I knew Optimus wouldn't get me doughnuts with these.
- Back to top -
Warhead writes: im firing my makeup artist
Predagade writes: those incompetant autobots! i tell them i switch sides and they shoot me! me!!! their greatest friend! the reason why they are winning this war! there is no justice
Tiedye writes: Megatron- This year for Halloween I'm going as a Autobot. How do I look?
Zeedust writes: Sadly, Armada Megaplex was rather short-lived.
Marv writes: Hey, don't look at me! This "cunning" disguise was Demolischor's idea!
Marv writes: Megatron: Starscream, are you SURE Prime's going to fall for this?
commander setinel writes: Megatron:I wanted to be cool
Demona writes: ok, thers something SEROISLY wrong here.................. a-bot symbols are supposed to be RED!
Demona writes: you think this is bad? in some other episodes, demoloshor, optimus, and hotshot have the same problems. they even put demi's head on cyclonus' body once!
Operation Ravage writes: Megatron suddenly realizes that Hasbro has repainted him again, and searches for an explanation as to the Autobot symbols that now adorn him.
- Back to top -
juggaloG writes: What stupid animator put Autobot symbols on me in this scene? Oh, it's you. (Blasts the animator with his antimatter cannon.) I guess you won't be painting anymore Autobot symbols on any Decepticons anymore, you worthless flesh-bag. (Chuckles ev
Kal-Seth writes: Megatron: Ok whos the wise ass with a spra can and the autobot symbol?
MechaDoom writes: Megatron: I have been Reformed through the Power of Luv!! Optimus, will you marry me? Optimus: ..................OF COURSE! No.
Zeedust writes: Megatron: "Me, an Autobot? You IDIOTS! Don't you know ANYTHING about the japanese TF mythos? Takara controls our media now, so if you see purple Autobot symbols, it means BERSERKER MODE!"
Zeedust writes: Megs, singing (To the tune of I'm 'Energy the Eighth, I Am"): "I'm Megatron the Eigth, I am, Megatron the Eighth I am I am! I'm commander of the 'cons next door, they've been lead se
Unknown writes: ALRIGHT!!! WHOSE THE WISEASS WHO SWITCHED MY INSIGNIA?!! CYCLONUS?! DEMOLISHER?!! STARSCREAM?!!!!
Unknown writes: Megatron: Autobot? I thought I was a Decepticon
Unknown writes: Megatron: DAMMIT, WHAT DO WE PAY THOSE ANIMATORS FOR? TO SCREW UP?
Unknown writes: Megatron: ... what?... What?? Is there... is there something on my face?
Unknown writes: Scene from, "As Bad goes good, and good goes Bad." Starring, Megatron as Optimus fraud.
- Back to top -
Shadow Fox writes: (Megatron has just received a big dose of mind blowing news) Megatron, your really the bastard son of unicron and Optimus.
metalformer writes: Grrrr! The animator certainly deserves a special 'gift' for this mistake: an autobot symbol tattoed on his flesh.... with laser fire and NO anesthesia! DAMN YOU ALL!
Unknown writes: MEGATRON: Well see...Starscream slipped something in my drink and the next thing I remeber was waking up in a garage in mexico and these were on me.
Unknown writes: Prime, PLEASE let me join the Autobots! Most of my troops are MORONS! I need to get away from them! I surrender! Please help me! I'll do ANYTHING to get away fromt them!
Unknown writes: HA!! This'll encourage TV Stations to show the old Transformers!
Unknown writes: I knew Optimus wouldn't get me doughnuts with these.
Unknown writes: god i liked it so much better when i transformed into a gun.
Unknown writes: megatron- hey cartoonist. you would think you would get it right before armada. I AM A DECEPTICON.
omega icecream writes: transformers decepticons in disguise!
menasor writes: "With this autobot symbol and my innocent face, the autobots will never be able to see through my disguise"
- Back to top -
Transfanbotacon writes: Megatron w/ Autobot symbol: Wait, I'm not who you think I am!
Optimus Prime: Stick it into your drive shaft, Megatron. You can't fool me with those insignias' of yours.
Megatron w/ Autobot symbol: But I'm really Megat
Minicle writes: Starscream: Erm Megatron why are you wearing an Autobot Symbol.
Megatron: I fell out with one of the Animators, and this is his cheap form of revenge.
DKusanagi writes: I'm an Autobot....what's next...I join Shadaloo...I heard that that Bison guy needs some good evil robots....I'm There!!
DKusanagi writes: Megatron: Okay Who told the producers I was an Autobot.... What, I knew it...When I get my hands on that Skybyte...He's Shark sushi....this is so embarrasing...
K-nonFodder writes: NOOOOOOOOOOOOOOOOOOBSSSSSS in Editing i think so!
Zeedust writes: "This may look like a mere animation error, Optimus Prime, but it's really a part of my ingenious plan to finally destroy he Autobots! After all, you wouldn't harm one of your own, now would you?"
Unknown writes: GET IT OFFF...PLEASE IT BURNS..IT BURNS...WHAAAA!!!!
Unknown writes: Ahhh! Get it off! Get it off! Before I contract Autobot cooties.
Zu Darkness writes: Megatron: I'm sorry can I join you now.

Optiums: Hmm let us think for a second.

Few seconds later the Autobots open fire on Megatron
APOLLO writes: Megatron: Optimus, I am sorry for being a bad due, lets be friends.

Optimus: HAHAHAHA, Megatron, cut the crap, I wasn't programmed yesterday dumbass. What a lameass plan HAHAHA posing as an Autobot. What's your next plan gonna be, dre
- Back to top -
Rhys writes: SNIFF! I miss Starscream so much now that he's joined the bots. I'm off to re-unite with my beloved.

Megatron: What did I ever do to you, you ungrreatful fools!"
Unknown writes: Thats the last time I'm a tou for Mc Donalds!Look what the did to me!
- Back to top -
Unknown writes: Megs: Why am I not the right f--king colours?
Unknown writes: 1) This is the second thing that is bugging me about this body.

Megatron: NOOOOOOOOO!!!!!!!!!
Unknown writes: NOOOO! I TURNED MYSELF INTO AN AUTOBOT!!!!
Pokejedservo writes: Megatron: ALRIGHT WHICH ONE OF YOU MORONS DID THIS TO MY SHOULDER?!
Jeremy writes: megatron here was infected wit the northnile virus turning him slowly to an autobot please contribute to save this robot so he can destroy us all please all 1-800-killus
Bombshell writes: The latest Armada repaint: Heroic Autobot Megatron!
Unknown writes: ... And then his heart grew three sizes bigger.
mouse writes: In a last minute attempt at correcting a mistake, Cartoon Network adds it own logo to confuse the masses and shift the blame.
genericanimefan writes: "WARDROBE! Bring my Decepticon outfit out ASAP!!"
Sheba writes: Hehe with this Autobot symbol as a disguise, nobody will ever suspect...
- Back to top -
Shellfox writes: Damn Tattoo artist, YOU THINK IS FUNNY!!!??
Unknown writes: Optimus Megatron?!?!?!?
mechaex writes: Now I know why theres no one at the take out window of Taco Bell!!!!!
mechaex writes: Now I know why theres no one at the take out window of Taco Bell!!!!!
davewelttf writes: Megatron:Alright, who swapped my insignias while I was sleeping?
Unknown writes: Ahhh... Back to the tradition of bad artwork and animation flaws that was started with Generation One. What are we going to have to do to get another Beast Wars with good dialog and animation?
Fanboy X writes: Megatron: Yay! I finally get to play the good guy this time!
Philip writes: Megatron: What? the seibertron.com messege board is gone?!? well just call me optimus prime.. like the autobot symbols?
BZArcher writes: Look, I just grabbed the wrong shirt this morning, okay?
Unknown writes: After concluding that the Armada cartoon sucked too much, Megatron decided it no longer mattered what side he opposed.
- Back to top -