Spike and Bumblebee with "Insecticide" 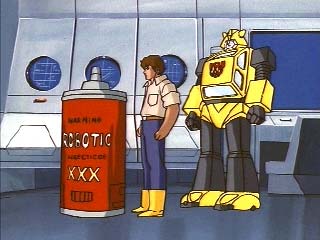 242 captions have been posted for this image so far ...

Jetfire22 writes: Spike: Well, that's about the worst alt mode I've ever seen!
trailbreaker writes: Time to spray some graffiti !!
Frenchhorngirl writes: "Oh my g
God! Yoi were too close to forgetting this before we left for Corpus Christi!"
chirtman writes: Bee "WTF this whole scene is a scale nightmare!"
dirtysock47 writes: huh how did that get there
Ratbat writes: A supersized can of extra-strength insecticide! Let's market this baby, and make millions, Bumblebee!
Mad_Mexicoy writes: I'm gonna huff this whole thing.....
Dinobot Prime writes: Spike: Something's not right here. I mean look! I am looking at a giant can of insecticide and you would turn inot a car smaller than a golf cart!
BB: Darn animators and their size problems...
Ratbat writes: Wow! A BIG can of insecticide! I knew Wheeljack was a genuis!
Ultimate Optimus writes: Raid: the only weapon against Insecticons.
- Back to top -
Roadshadow writes: Spike: First, pornography in a can. And now this!
Decepticon Commander writes: Spike:Who put this here????
Zeedust writes: Waspinator, offscreen: "Oooh, Waspinator has bad feelining about this..."
Castle74 writes: Whip Hits anybody?
Tiedye writes: SPIKE- SOOO.....If your not useing this to lube your joints....What do you use it for?
Unknown writes: SPIKE: "Bumblebee, it's time for your weekly waxing"
Sean writes: OK... WHO ORDERED GIANT SHAMPOO.....
Unknown writes: RAID... kills Insecticons... DEAD!
MiGrAinE writes: This acid is freaking me out man!!
Unknown writes: "More smart, more safe, more than meets the eye, Robotic XXX!"
- Back to top -
Unknown writes: Bumblebee: "Drink It..."

yeah very funny spike.
Unknown writes: PORN< HAAHAHAHAH MINE
Unknown writes: another one of Hound's holograms...
- Back to top -
Unknown writes: When Spike and Bumblebee ask themselves "what where those Armada writers sniffing", Teletran-1 projects a following
hologram.
Unknown writes: spike: UNBELIEVABLE THOSE CARTOON DRAWERS, CANT THEY SEE THIS CAN IS NOT RELATIVY IN SIZE COMPARED TO ME!!! bumb: TO YOU??? WHAT DO YOU THINK OF COMPARISMENT TO ME!!!
Unknown writes: Spike: First, pornography in a can. And now this!
Arkhaon writes: look..a nice present from megatron...want a drink spike?
omega icecream writes: hey bumblebee TAKE A DRINK OF THIS!
BlItZeR writes: Spike:"Hey bumblebee this is not poison! it just Primes whiskey Keg, see its a triple X'er too. hehehe
Unknown writes: bumblebee- spike are you sure prime will not be offended if we give hom this deodorant?
Unknown writes: spike- see if that walmart smiley face comes near me. extra low prices my ass.
Zeedust writes: Spike: "Insecticide and porn, all in one can?" Bumblebee: "What can I say, wheeljack's a genius."
Jetfire Masta writes: BB:think this will kill the decetipcons im to lazy. Spike:dont be stupid u cant kill any 1 with this BB:You can kill the insecticons idiot
- Back to top -
Unknown writes: Bugs Bunny: â€œAahâ€¦ (chomp, chomp, chomp) ironic, isnâ€™t it?"
ultramegatron writes: spike: dude i think we're shrinking.
bummble:quiet flesh bag we're not shrinking the can's just geting biger as we get closer to it
parkwood writes: -Bumblebee- "Man those were some nasty roaches!"
-Spike- "I told you trying to make a life size model of Optimus out of pancackes was a bad idea!"
DKusanagi writes: Spike: You sure this is Insecticide..
Bumblebee: I'm sure, I used it when that insipient Waspinator was after us!!!
K-nonFodder writes: Spike" i heard if we spray it into a paper bag and breath it, it will make us feel better" Bee" i'm game"
Unknown writes: "It's all right, Bumblebee. There's no shame in having robotic lice...we can take care of the problem with my little friend here."
Unknown writes: "Mighty glad, Greenpeace hadn't gotten hold of this..."
Unknown writes: Spike: What the hell is with the can.
Bumblebee: I dont know it just sits there.
then they both look at it again and just raises theres eyebrows.
TetraReris writes: Spike: Look at this prop I got for Daniel's report on inhalent use.
Bumblebee: You should see the size of the inhalent cannister in Red's room.
Unknown writes: Spike: Um....Bumblebee, what the hell is this..
- Back to top -
thexfile writes: spike : he waw what a good disguise , what a cool new transformer bumblebee who is it...

Canbot : "can I come too"
Unknown writes: Hey Spike, I'd like you to meet Soundwaves younger brother. What!?
He's kind of quiet, but hit that on button near the base of the can and he'll talk for hours.
NOBODY LOVES WHEELIE writes: Spike,"Well Bumblebee it's really sad isn't?" Bumblebee,"What's that?" Spike,"This is the unproduced prototype for Tonka's Gobots Spraymasters,it was scheduled for release af
NOBODY LOVES WHEELIE writes: The ark has cyberroaches.
Ghostscream writes: If there's something itchy and crawling all over you

Who ya gonna call?

If they make repulcas of themselves and eat energon

Who are you gonna call?

Bumblebee: What makes you think I care enough to even answer that?
- Back to top -
Bumblejumper writes: Spike:That's how much deorderant you use!?!?
BumbleBee:Uh..no.*stinkl-ines come from his armpits.*Spike:Man,you stink,literaly
Unknown writes: So Bumblebee, why do you have this again?
Black Arachnis writes: bumblebee: walk up the the insectiocns and sprya em with that can over there willya spike?
spike: right and how am I supposed to lift the frigging can you yellow moron!?
Unknown writes: Spike: Wow Bumblebee, on Seibertron you guys have Porn in a Tube?
Bumblebee: Well, few female bots on Seibertron, bunch of bachelors... this stuff is practically the _only_ thing keeping us going. Consider it the "gasoline" of the Aut
Unknown writes: Spike: Do you think Metroplex will use this giant can of Right Guard? Bumblebee: He better, or his BO will take us out before the Decepticons will.
Skyfire the Artist writes: It was after this that Optimus Prime canceled his account with "Think Big" Novelties.
Rhys writes: WHEELJACK: Behold, my latest invention.

SPIKE: A can of insecticide?

BUMBLEBEE: Oh, those insecticons are soo dead!
Big Grim writes: Spike - It's a little quiet in here. Bumblebee - Maybe a little too quiet, old chum. TO THE BEE-MOBILE !!! Spike - You Mean 'You' ?! Bumblebee -Um .......... Yes
davewelttf writes: Spike: Looks like we're gonna need the big "gun" for them insecticons that are eating our plumbing.
Bumblebee:Can you do it quickly I don't know how long I can hold it like this.
Unknown writes: Spike: Bumblebee, you got some bad B.O., use this.
- Back to top -
Unknown writes: spike: XXX? PRONO!*opens the can and the stuff mist around him and he falls to the ground dead*
BB: *shifts eyes and stuffs spikes body into the can and backs away*
Jeremy writes: spike: hm... wounder if this works on annoying robots who are named after bugs...
- Back to top -