The Decepticons stand on a cliff 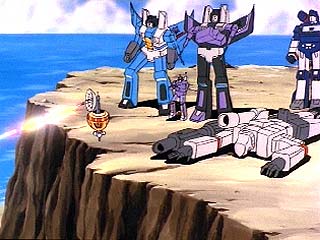 331 captions have been posted for this image so far ...

OP-there they are...attack
Roadshadow writes: Skywarp: Megatron partied too hard.
Thundercracker: Yeah...
Soundwave: I call dibs on his wallet!
Rumble: Dammit I was gonna do that!
Dragonoth writes: Megatron: "STARSCREAM!"
Starscream: "The Mighty Megatron has fallen! Now I am leader of the Decepticons!"
Megatron: "You're lucky your null-ray hit my gyro-stabilizer. You have time to fly far away before I get up."
*
Warhead writes: thundercraker-you gave megatron the wrong pills
skywarp-I know ........but it was pretty funny
Screambug writes: Megatron: Oh, man. I just tripped when I finally blasted Optimus Prime right off the face of the earth!
Minicle writes: Megatron: For the last time Ravage, let go of my legs!
Marv writes: I can't believe I forgot to bring the rest of our new superweapon!!! (bangs head to the ground) STUPID!!! STUPID!!! STUPID!!!
Marv writes: Mommy, oh mommy!!! Why didn't you ever love me?!!! If only you'd loved I wouldn've become a Decepticon!!!
- Back to top -
Marv writes: Skywarp: "Well, we kinda figured that having a dead Megatron for a leader was still better than having a fully functional Starscream in charge... And in fact, we don't really notice that much difference!"
commander setinel writes: Skywarp:THIS IS WHAT HAPPENS WHEN YOU GIVE MEGATRON DRUGS!!
commander setinel writes: Skywarp:THIS IS WHAT HAPPENS WHEN YOU GIVE MEGATRON DURGS
Alphatron writes: Rumble: Oh my God! You killed Megatron.
Soundwave: You Bastards.
Kal-Seth writes: Megatron: Left arm...numb ..heart burning

Megatron Develops a new hobby
Kal-Seth writes: Skywarp: poor megatron he saw his Armada and Robot's in disguse counterparts
Flashback writes: While the other Decepticons crumbled and faltered, Skywarp and Soundwave were able to meet the day with the kind of confidence that only clean, fresh underwear can bring.
shockwave_inoz writes: SOUND: "Megatron! This is no time to be taking a nap!WAKE UP!!" MEG: "Mph..wha..hang on, Ma...just a few more minutes, ok?" OTHER DECEPS: "WHA......???"
- Back to top -
Unknown writes: After fred destroyed megatron, a happy starsream left to celebrate, while thundercracker,skywarp,rumble and soundwave kill fred with a blaster thingy after he jumped of a cliff
Unknown writes: After an angry fred...
Unknown writes: Skywarp: Hey, we made it all the way to the top!! Thundercracker: Hell yeah... now this is livin'... the wind through your circuits, knowing you're so much higher than everybody else... if it weren't for that lightweight down th
Unknown writes: After eating bacon at every meal, Megatron dies of a massive heart attack.
Unknown writes: Skywarp: Megatron has fallen! I declare myself leader! Thundercracker: Isn't that Starscream's line? Skywarp: But I AM Starsc... stupid animators!
Unknown writes: Thundercracker (talking over the satellite phone): Yeah, Screamer, things just haven't been the same since you left for Armada. I mean, Megatron's just been shot to the floor and NOBODY'S made a vie for leadership. I guess I&
Shadow Fox writes: Thundercracker- Whoo boy, didn't see that one coming, stupid usless human Spike just came up and kicked him in the shin, then ran away..
Shockwave writes: Skywarp: It's too bad Megatron has passed out from drinking so much last night.
Thundercracker: Yea.. His plan to use this device to cut off the Autobot's live porn feed to slowly drive them insane was brilliant..(snickers). Too bad he
Unknown writes: SKYWARP:Man, he's really gotta do something about that narcolepsy.
DECEPTICONS:uh-huh, yeah.
Unknown writes: Thundercracker: Are we supposed to call THAT our leader ?
- Back to top -
Unknown writes: ON YOU GO MEGATRON JUST A FEW MORE INCHES

"HA HA THATS WOT YOU MOM SAID"
Unknown writes: Soundwave: Impossible. Narcolepsy is a human disease.. conclusion.. Megatron is faking it.
Zeedust writes: "Get up, Megatron, I was just kidding about the throw rug mode. Yopu're not a triple-changer."
Unknown writes: Soundwave: "Why is Megatron dead?" Skywarp: "You see that Satelite there? It's his left testicle!"
M writes: We finally found Megatrons weakness. Tristars Godzilla via sattelite makes him collapse.
Arkhaon writes: Soundwave: I knew we shouldnt let megatron drink that last bottle of energon
Unknown writes: The truth of Megatron's shocking condition is revealed for the first time ever in this exclusive footage . . . the Decepticon leader suffers from narcolepsy . . . this story and more tonight on your very own home station, WDEC!
Unknown writes: Megatron: Now that... WHOOPS! Soundwave: And he called ME a clumsy fool! Rumble: Hey! We all know nothing can get as clumsy as Starscream!
Minicle writes: Skywarp: Heh, Megatron fell over, Megatron fell over.
Megatron: Silence, i'm er, just examining this fine background cel.
Autobot bubbs writes: All this, and more when you order your personal copy of "DECEPTICONS GONE WILD", only 29.95 with 4.99 shipping and handling...order yours TODAY!!!
- Back to top -
parkwood writes: Why is it that our fearless leader is the only one who hasnt upgraded to rechargeables!?!?!
K-nonFodder writes: Soundwave" didn't i tell him, effective leaders don't get liquored up"
Dark writes: I bet if we threw him off here, no one would EVER find him...
Unknown writes: Thundercracker (through gritted teeth): Just...ignore it...the tantrums never last long...
thexfile writes: Rumbel : hey you killd megatron... YOU BASTERDS !!!!
thexfile writes: megatron: (krieeing) soudwave you told us we would get sky on this satelite , i want my sky !!!

Soundwave pulls his foot back to its original position.
Unknown writes: Skywarp: We'll show those Autobots by shooting them with our "Happy fun fun full of joy" beam~!!!

Shockwave: Oh, so that's where the "like a rock" thing comes in. It's whe
Unknown writes: Skywarp: Okay he's out. Begin phase two of Operation: Like A Rock. Everyone, pull off his arms and legs and throw them in the water.

Megatron: Shut up and prop me against some rock.
Shadowen writes: MEGATRON: I'll make this question real simple, so you scrapheaps can understand. *Who ate the banana that $&#*ing banana peel belongs to?!?*
Unicron writes: Megatron: Damnit! How did my shoelaces get untied!? Shockwave: Rumble, eject. Operation, tie his shoes.
Unknown writes: Rumble: Get his car keys!