Two construction workers in a truck 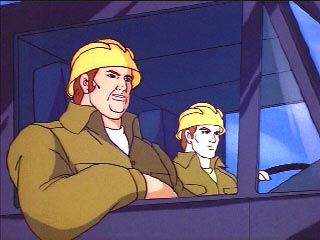 47 captions have been posted for this image so far ...

trailbreaker writes: These hats are all the rage ...
Microraptor writes: You ever notice how every human wears the same clothes?

Spike: Shutup dad! Dont give him any ideas!
Motormaster: Hey both of you quit your barking! You know
sdn1337 writes: Sparkplug: You know spike... if motormaster gets a little angry at us, he could just transform. Then our bodies will be crushed and sliced into bits.

Spike: Shutup dad! Dont give him any ideas!
Motormaster: Hey both of you quit your barking! You know
Ryuki writes: ARE WE THERE YET ?
agentcastle writes: for the last time... that ISNT the stick shift
d_sel1 writes: Roll on highway, roll on along,
Roll on daddy till you get back home,
Roll on family, roll on crew,
Roll on mamma, Like I asked ya ta do,
And roll on 18 wheeler, Roll on
Roll On!!
Bumblevivisector writes: "So lemme' get this straight: some guy names this custom rig we're in MOTORMASTER, after the Stunticon leader, so now Hasbro renames the character MOTORBREATH just in case they can't challenge this thing's trademark?"
Zeedust writes: What is love? Baby don't hurt me, don't hurt me, no more...
- Back to top -
Kelvint writes: "I've been driving for 15 hours straight..."
"Quit showing off, I stabbed a woman in a pub in Berlin."
"Bah! I once sexually assulted a horse in Berlin."
Poyguimogul writes: Not-Sparkplug "Remember that time I was almost disemboweled by a giant mechanical doberman acting like a jaguar?" Not-Spike "I Totally do man!" Not-Sparkplug "You Totally bailed on me dude!" Not-Spike "I know, Right!? Bxtch move on my part bro, my bad." N
Antron writes: "....never pay her until you're finished. Oh, I almost forget the PSA.... Remember kids, always wear a condom."
snavej writes: Cruisin' wit' da oil rig cru, blud! Gonna git some bitch ass crude!
Sinnertwin writes: -That's not the gear stick.
- I know. Eyes on the road, eyes on the road.
transformers master writes: Sam and Sparkplug Witwicky in Nemesis Prime.
VioMeTriX writes: and here is a case where a former boyband members careers took a slightly different path...
formshifters writes: It was the dark of the moon
On the sixth of June
And a Kenworth pullin' logs
Cab over Pete with a refer on
And a Jimmy haulin' hogs...
WolfSpider1979 writes: "Driver": "Uh John, This truck is driving itself."
John: "How do you know? Your hand is right on the wheel!"
"Driver": "That's true; My hand IS on the wheel. The only problem is: My arm is not ATTACHED to it!"
BeastProwl writes: "So now, everytime we hit a speedbump, our heads will be safe!"
"What about SEATBELTS!?" *SMASH*

Needless to say, the Autobots got the Public Service Announcements at the end of the episodes. Now you know, and knowing is half the battle!
- Back to top -
SdazVarence writes: "You checked for Decepticon Markings right?"
"Of course I did, you can never be too careful with a Purple Truck"
garrickboomer writes: "Want to know how I know you're gay? You called this morning asking to dress alike"
"Oh yeah, want to know how I know you're gay? your farts smell like onion and ketchup"
Super Megatron writes: Last time I was in a truck, it was red and it was shaking like crazy when I some kid with a stereo player walked in front of me. The weird part? I didn't start the engine!
King Slick writes: Frank: So where are we picking today?
Mike: Today we are off to pick, TRIPTICON'S NOSE!
Frank: Ewww....
Ravage XK writes: I like to hang out the window and talk on my hands free earpiece while a surly mannequin drives the truck. Neither of us wear a seat belt cos we are double hard bastards, yet we feel if necessary to wear hard hats in the truck.
njb902 writes: Still slimmer than brawn.
#Sideways# writes: "Dude... What if a giant cat robot attacked us right now?"
trailbreaker writes: Guy #1 - "I know my wife is cheating on me."

Guy #1 - "Everyday when I come home, the parrot says 'quick, out the window!' "
kamenriderjester writes: My double chin senses are tingling. Quick, pull over, a Krispie Kreme must be close by.
killgore13 writes: 'damned enlarged prostate...pull over next to that bush there!'
- Back to top -
killgore13 writes: '...so long story short, now I always take an extra pair of socks with me whenever I go to the nudie bar.'
afiston writes: Bill: Dammit Joe, I knew we should have discussed what we were going to wear to the TF4 auditions, now we look like wannabe beastie boys. Bill: Shut up, shut up, SHUT UP!
SKYWARPED_128 writes: "Dude, did you--"

"Motormaster's having energon indigestion again."
SKYWARPED_128 writes: Motormaster: "Damn it, Soundwave! You gave me the wrong holographic driver files! I'm MOTORmaster, not Mixmaster!"
Ultra Markus writes: the new TF4 movie extras
MasterSoundBlaster writes: EASTBOUND AND DOWWWNNNN, WE'RE LOADING UP AND TRUKKING.
Trikeboy writes: Damn traffic. -BEEP BEEP- We're late for the audition for Sparkplug and Spike. I hope the roles aren't taken by the time we get there.
- Back to top -