Rumble goes for a drive in Dragstrip 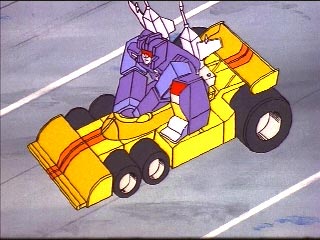 66 captions have been posted for this image so far ...

DeltaSilver88 writes: Now move, Dragstrip, before I tear you a new steering wheel!
Towline writes: After failing to combine using the styles of "Combiner Wars", and "Titans Return". Inspiration came to Rumble and Dragstrip in the form of "Crash Combiner" style. Will it work? Stay tuned at same transforming time, same transforming channel.
TrinityIce writes: Dragstrip: Are you sure about this?

Dragstip: Well how'd that one end?

Frenzy:...
Towline writes: After failing to combine "combiner wars style". Rumble and Dragstrip are trying out "titan's return style".
BattleConvoy writes: The new F1 driver arrives on track........
BattleConvoy writes: Dragstrip: Do you have a FIA grade A super license to drive this?
Rumble/Frenzy: Err no???
Dragstrip: Get. off. me
Rainmaker writes: Dragstrip: HOW CAN YOU NOT FIT IN ME? YOU'RE A TAPE DECK!
Victinoko writes: so that's the new mario kart character
Towline writes: The Drawbacks of Dragstrip being the only stunticon without a tape deck. Rumble has to sing his mixtape contents using his robot mode voice.
bumblebeej8 writes: Drag Strip: Isn't that Frenzy on my back?
F/R: I don't even know what my name is!
- Back to top -
Riptidemtmte writes: Rumble: Quick! head for that mystery box!
DS (thinking): Is that Rumble on my back, or Frenzy? Damn FIRRIB...
TheWeirdOne12 writes: ONWARD, ROYAL STEED!
RatchetJazz writes: Hey Megatron look at the neat toy i got from santabot
Bismuth writes: Go forth, my loyal steed!
kruiz220898 writes: It won't fit!!
cusd220 writes: RUMBLE:lets go to Mc Donalds!
DRAGSTRIP:NO!
MarkNL writes: Y33H@W!!!
Unknown writes: WEEE!
maroyasha writes: SCREW "TO SCALE!"
Zeedust writes: Rumble: "What color turtle shell did we get?"

Drag Strip: "Either red or blue, depending on who you ask."

Rumble: "...I hate you."
- Back to top -
Morbalis writes: Frenzy go fast! Frenzy go fast! Troll, troll troll, rumble, rumble, rumble!
LevelRaze writes: So this is what Prime was pointing at in the last caption.
Morbalis writes: Rumble explaining his ride: So with gas nearly $4.00 a gallon, it was either this power wheels or a segway. AND since Im not a total douche ...
NeonPrime writes: Comming this SUNDAY SUNday sunday...It's Rumble on the Roadway...live at the Harrisburg Farmshow Complex.BE THERE!
happylock writes: Where do you put the slagging Quarter?? For this ride?
Bumblevivisector writes: RUMBLE: Hnnngh! I've almost got the vegetable pulled out of subcon--what? This is Mario KART, not Mario 2?
Axelbro writes: soundwave:rumble this cars are only for small kids you are to big for this plus you are not a kid anymore
Rumble: but i have the heart of a little boy
Soundwave: ya i know is in your pocket
Likeits1985 writes: Grand Theft Auto, Cybertronian style!
SkywarpPushesYou writes: If Wheeljack can have a sports car why not me?
Super Megatron writes: Gonna fight the Micromasters! Better do an Optimus Prime and armor up!
- Back to top -
NTESHFT writes: Are you sure this is going to get us closer to Danica Patrick, Rumble?
...Oh yeah, she's gotta notice this.....wait,She went to NASCAR......WHAT?
dahpadre writes: Does this make me look fat?
WolfSpider1979 writes: Hey! Stop! What are ya doin? Don't touch me there! You're making me giddy!
Blozor writes: World's. Lamest. Duocon.
happylock writes: Since when did rumble grow to being the size of a normal transformer? Wasnt he about human sized so shouldnt he fit in?
happylock writes: Look even Rumble likes to drive minikits just like lego batman 2.
Sinnertwin writes: I live my life a 1/4 mile at a time
Bumblevivisector writes: RUMBLE: "My Masterpiece toy IS gonna' be articulated enough to pull off this pose, right? If any collector has to use some fugly 3rd-party toy as my stunt-double again, I swear to Primus..!"
Mixsound writes: Aww, man! Now people are gonna' think that I'm some homo 'cause I'm wearin' purple and in drag...
Mindmaster writes: Watch out, Nintendo: the Transformers have entered in Mario Kart!
- Back to top -
PsychoAndy writes: Pow-Pow-Power Wheels!
Twitchythe3rd writes: Dragstrip, after having several Energon Cubes, soon regretted his decision to have Rumble be his designated driver.
Trikeboy writes: Dear Santa, Thank you so much for the toy car you gave me for Christmas. I use it everyday. I have enclosed a picture of me playing on it. I hope you are well and see you next year. Your buddy, Rumble.
Ryuki writes: Dragstrip: Rumble, Do you realized that 'Action Master' line is already dead ?!
Ryuki writes: When I'm saying "I want a cassette playing on me while I'm driving." This is not what I had in my mind !!
Kelvint writes: "How is it you primitive Autobutts never got around learning about mass displacement???"
Ryuki writes: Dragstrip: this is the last time I will take Soundwave plead to babysit his cassettes while he is away.
njb902 writes: This so needs to be a driver and car combo for twisted metal!
lonrac powerlinx writes: who's got tickles??
Ravage XK writes: That IS NOT my gear stick.
- Back to top -
#Sideways# writes: Dangit, Rumble!

"GEDDOFFAME, YOU GLITCHBRAIN!"
Manterax Prime writes: Rumble: Oh, Primus! I hope somebody doesn't make a sick joke!
Dragstrip: I'm pretty sure somebody has by now, they just can't post it as a caption.
SKYWARPED_128 writes: Dragstrip: "No, your wallet's not in the dashboard cuz I don't have a frickin' dashboard! Now get your hands offa me!"
- Back to top -
King Slick writes: Introducing the latest in racing titles Transformers: Heavy Metal Racing
MasterSoundBlaster writes: This beats playing Mario kart any day!!!
Bumblevivisector writes: RUMBLE: "Wait, wasn't I human-sized when we first woke up and attacked that oil rig? That was only 2 years ago, why can't I fit into this thing now? Huh? Whaddya' mean 'Cuz I can't drive stick'?!?"
PrymeStriker writes: Ride me, baby...
Bumblevivisector writes: RUMBLE: "Cmon, remember Pac-Man's nickname in his cartoon? Hell, that's a racial slur in the UK, and I've never heard complai-"
MEGATRON: "But THAT name wasn't slapped on a toy in British markets! We are NOT calling this guy SPASTIC!!!"
Bumblevivisector writes: RUMBLE: "Wow, this thing really IS fast! We pulled in front of the last pic in 1/100th of the time it needed to replace that one of dad and Brawn!"
- Back to top -