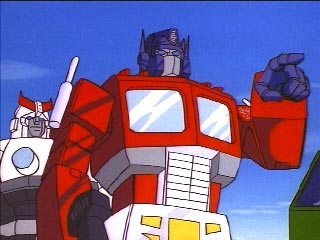 93 captions have been posted for this image so far ...

Prowl: You just noticed Prime?
User897 writes: Only YOU can prevent forest- Wait, do I look fuzzy to you?
Morbalis writes: Yo mamma is soooo fat ...
rivithead242 writes: Ignore my last one. Optimus: Prowl! Look! Over the Top starring Sylvestor Stallone is playing at the theater. Prowl: Isn't Spikes son Daniel in that movie?
rivithead242 writes: Optimus: Prowl! Look! Over the Top starring Sylvestor Stalone is playing! Prowl: No Prime...no.
rivithead242 writes: Optimus: Look Prowl! A flash mob! Prowl: And we choose to live here, why again?
PhelesDragon writes: I have the weirdest roboner right now...
primehunter writes: Prowl, hold me back...
- Back to top -
rivithead242 writes: You drank too many energon cubes if you think you're Jewish too Megatron!
tc14forever writes: TRANSFORM and SWAG OUT!!!!!!!!!
Maestro Meister writes: "Megatron, your trigger is only this small!"
#Sideways# writes: OH!

I see what you did there.
Bumblevivisector writes: OPTIMUS: "Hey, look at all those ads for 3rd party stuff in the bar on the right! Did that Uranos guy just call me Knight Morpher?"

PROWL: "At least the Play Arts chick seems to have largely replaced that bearded t-shirt guy...D'OH! He's back..."
SKYWARPED_128 writes: Leave Prowl alone, guys. Just because he's a bit of a prick doesn't mean he doesn't deserve an MP toy.
sdn1337 writes: Prowl: I just want to die already optimus... ive given up on life as an autobot

Optimus: Look over there prowl! A transformers the movie script! That should do the trick.
njb902 writes: OMP Prowl it Changed.
JustPlainME writes: Wedgie!!!!
Twitchythe3rd writes: Prowl! Look! A munky!
- Back to top -
Bumblevivisector writes: B.K. CASHIER: "Sir, you need to be in a car to use the drive-thru..."
budmaloney writes: Combo 2 please
Bumblevivisector writes: OPTIMUS: Hey, what the heck were Brawn and Soundwave just doing over there for 3 months?
- Back to top -