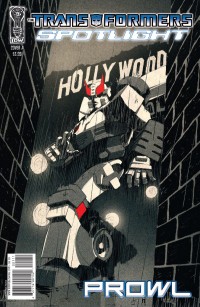 It's been quite sometime since the last Transformers Spotlight release. Fortunately it's back again, as Prowl is the newest Transformer to take the Spotlight. BZZURKK offers up a five-page preview of the comic, along with covers and the description. You can check most of it below, while the rest can be seen here.

Written by Mike Costa with art by E.J. Su and cover by Nick Roche and Su.

The end of the war between Autobots and Decepticons had profound changes throughout the ranks, even for the coldly logical PROWL. Learn of his change of heart and its impact on his actions in the ongoing series.
Transformers Spotlight: Prowl
32pg.
Color
$3.99 US Transformers Spotlight: Prowl will be at your local comic store this Wednesday!

Convotron wrote:I don't want to spoil the story for myself

Convotron wrote:I don't want to spoil the story for myself

Ahem...spoiler alert please. I didn't know it was a hole plugger issue, hehe.