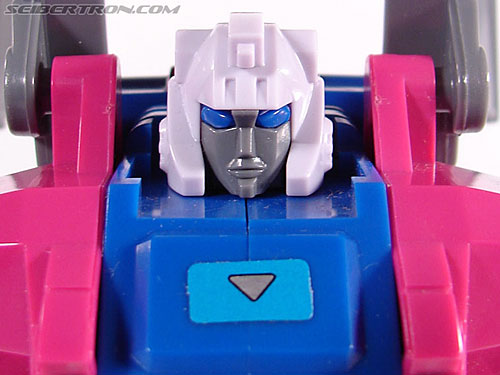 He says that nothing frightens him, except when he looks in the mirror. He thinks that everything is a big joke and acts accordingly, even during battle. Goofy, irreverent, sometimes annoying... but a top-notch warrior. In robot mode, wields a vaporator which gassifies a target's fuel, leaving it inopertive. In creature mode, has indestructible tusks. Flies at 45 mph, can leap 3 miles at a time.

Profile: Everything's a joke to Grotusque, and --as he says-- why shouldn't it be, when the only thing that frightens him is looking at himself in the mirror! Though he doesn't doubt Primus saw him as part of some great and noble scheme, he does wonder what his creator was thinking of when he designed his creature mode. A bit too much high grade energon the night before, is Grotusque's opinion! This goofy, irreverent outlook on life is as appealing as it is annoying to his fellow Autobots. Sometimes, just sometimes, they wish Grotusque would take something seriously. Even in pitched battle, in dire, possibly terminal situations, he's joking away. But it's not bluster to hide his fear-- Grotusque is not only a topnotch warrior, his courage is legendary. No, it's that Grotusque sees life in general as a joke, and therefore sees no reason to view death any differently. "Why shouldn't combat be fun?" he's been heard to utter. "If it wasn't, I'd be loath to do it!" Though he appears on the surface to be offhand about his duties, Grotusque is a brilliant campaign planner, with a sharp and analytical mind perfectly suited to the complexities of warfare.
Abilities: Though not immensely strong, and --when in robot mode-- fairly plodding, Grotusque's razor sharp mind makes him a foe to be reckoned with. He wields a specially modified vaporator, designed to gassify an opponent's fuel, leaving him to grind to a full stop. His creature mode tusks are made from a hyper-dense alloy that, Autobot scientists believe, is all but indestructible. In creature mode, Grotusque can fly (using his back wings) at speeds of around 45 mph. But the process Is both awkward and fuel consumptive, and he prefers to use his powerful hind legs to bound along, making leaps of around three miles at a time.
Weaknesses: Grotusque's dislike of his creature mode tends to make him reluctant to use it more often than he has to. As a result, he tends to go into battle in his more vulnerable robot mode, leaving himself more exposed to possible injury. Also, Grotusque's wings are quite fragile and are easily damaged.
[ Back To Top ]

Optimus Prime #1 - "New Cybertron Part 1: To Walk Among The Chosen"