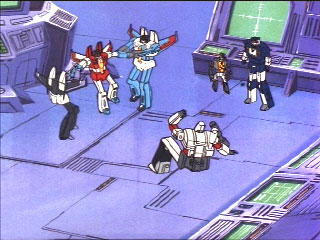 76 captions have been posted for this image so far ...

trailbreaker writes: Benny Hill music ....
Bennington1234 writes: If you think that is all in the picture.
(Outside Decepticon HQ.)
Constructicons and Stunticons:(Singing to the theme of Enchantix from Winx Club):Combiners,Maximum firepower,maximum force!
Bennington1234 writes: What a night of overenergizing and watching a marathon of Winx Club does for the Decepticons.
ksol71339 writes: SOUNDWAVE plays Metallica's " Sandman. "

BOMBSHELL:. " Every time they're HIGH on ANTIFREEZE.."
BG the Robit writes: Megatron: Hey guys! Energon's in the back, we've turned this place UPSIDE-DOWN!
dcj91x writes: Megatron: "Dancing Starscream? This is bad comedy. Let me show you how it's done. You two hold him! Soundwave, lay me down some beats."

We would all go back to Cybertron
But we're stuck here with Megatron
what0080 writes: Sung To Monty Python's "Camelot Song":

We
Q_Silverbolt writes: "I hope no-one is filming this!"
ACStarscream writes: Doesn't matter how big or small they are, there's always at least two people willing to fight over the last toy in the store.
Angelbot writes: All day, all day.
Watch them all fall down.
All day, all day.
Domino dancing.
Unknown writes: skywarp:pullnala!
megatron:wrong movie, bub, we aint museum props
- Back to top -
Freddery writes: Megatron: What the hell is wrong with Starscream?
Thundercracker: Nothing, he's just delirious.
Megatron: From what?
Skywarp: Put it this way.. you need to start blocking some of the human websites.
trailbreaker writes: White guys can't dance, nor can Decepticons.....
ChevyTron writes: This very day gave Megatron some ideas of what to do to kill Autobots.
ChevyTron writes: This was the first and last time anyone listened to waltz music on this vessel. Because reattaching robot arms isn't cheap.
ACStarscream writes: Due to the shortage of turkey mechs this year, the Decepticons resort to using Starscream for their wishbone.

In a related caption for this week's contest, Starscream's wish did not come true...
Frostic_Prime writes: Hahahah Hyphy!
Liege Evilmus writes: "Ring around the rosie pocket full of posies, ashes ashes, we all fall down!"

"Good, now if everyone understands the plan, attack!"
Thanatos Prime writes: Thundercracker: Easy Starscream! You're just going to have to accept that you just got served!

Soundwave and Bombshell: Oh Snap!!!
Editor writes: Megatron: Thank you Soundwave, that will be enough. Mr. Roboto indeed. YOU THREE! Stop your foolish dancing and bring me these humans called STYX!
Ultra Markus writes: Megatron : We don't have bell bottoms for nothing, now dance like Travolta!
- Back to top -
ultra_drokk writes: move over michael flatley, here's starscream, the lord of the dance
prime idiot writes: Megatron : Next time he says "pull my finger" I'll kill you all because I can barely stand up due to the stink!!
Abrupt Departure writes: The third annual decepticon toss is almost at an end and with Soundwave as a judge it's anyone's guess as to which team will win.
Predaprince writes: Megatron: No, no, no! It is Jazz that is supposed to be ripped in half!
flame_leopard writes: Optimus Prime sends a scout to see why there has been no new attacks from the Decepticons, and finds that they have discovered the horrible, horrible game Dance Dance Revolution.
ThunderThruster writes: soundwave: get down and shout
Unknown writes: Magatron: I am drunk!!!
dryxler writes: Megatron: "C'mon, Starscream, come over here and tell me what Unicron can bring you for your birthday. I promise I won't use my fusion cannon."

Bombshell (whispers): "And then after I made him do it I was laughing so hard my e
mechislander writes: Proof that "So you think you can dance" has SERIOUSLY gotten out of hand...
Road Turtle writes: "Submitted for your approval; a tape recorder, a gun, three F-15's, and a rhinoceros beetle. Six random objects that are more than meets the eye. Yet despite their extraordinary nature, they still find themselves trapped in their two dimensiona
- Back to top -
Road Turtle writes: Starscream, "You let the humans do what to Nightbird!? She was the closest thing we had to a Female Decepticon, and you let them mothball her!"

Starscream, "Of course sh
snavej writes: Starscream: You spent ALL our money on these huge, antiquated computers? How are we going to buy ammunition for the rest of the year?

Megatron: I'll do what I like! And, by the way, I like going to antique computer collectors' fairs! There
snavej writes: Megatron: Don't grab him like that! His guns are pointing right at you!

Bombshell: And these are supposed to be some of our best warriors!

[BZOW!]
snavej writes: Megatron: I told you that bigamy was a bad idea, didn't I Starscream?! Now your wife and girlfriend are fighting over you!

Soundwave: Bombshell and I can't do oral.

Megatron: Curses Starscream! How dare you abandon me, your partner!
TheTouch writes: hehe hehe hehehe hehe hehe hehehe he he he hehehe and then another he he hehehe
- Back to top -
gogleman374 writes: Red Rover, Red Rover, Let Megatron Come Over! *Megatron Transforms into gun Points at Starscream* Starscream:Oh ----!
osiricon writes: Hey Megatron look what we learned from Darren's Dance moves DVD!!
Dragon1130 writes: Megatron: Starscream, How dare you make me fall. I should make you watch crummy 1980's cartoons.
STarscream: NOOOOOOOOOOOO!!!!!!!!
Soundwave: *Thinking to self* I wounder is our budget is going to go down for that comment.
m1-prime writes: Starscream, you are a Decepticon Warrior, not a Goonie... NO MORE Truffle Shuffle!
Roadshadow writes: Skywarp: He's MY Starscream! Mine!
Thundercracker: No! MINE!
Megatron: Dammit, you two, just share!
Starscream: Please Primus, just kill me now...
megatrina writes: Megatron: Blast it, my dance card is still empty. I suppose I shall have to take a turn about the room whilst the others enjoy the quadrille.
Road Turtle writes: Starscream, "You just wait Megatron! Someday I'll dump your battered body out into space, and after that, I'll be crowned king of the Decepticons!"

Megatron, "A coronation, Starscream? This is bad comedy!"
Road Turtle writes: Thundercracker, "I want to play with Starcream!"
Skywarp, "No it's my turn!"
Megatron, "BLAST! I bought him, I should be the one playing with him!"
Starscream, "I'm not a toy! I don't even look like tha
autobot_aza writes: megatron: why doese starscream get all the atention!!! im much cooler dance with me now!!!!
Azimuth writes: Skywarp: "Get your own Wal-Mart exclusive MP Starscream!"

Thundercracker: "Oh, come on, just let me transform him a couple of times!"

Starscream: "Release me, you morons, you'll scratch the paint!"

Megatron: "Enough! Quit that prancing around and go do something productive!"

So
dabattousai writes: The Aftermath of the TransFormers Movie Opening...

Starscream: Did you see what Bay did to me? Why I oughta...

Megatron: Shut it Starscream, it is not worse than what they did to me.
joe10lo writes: Gives new meaning do the robot.
Sloptank writes: Curse you, Red Rover! I shall beeee...avengeddddd....
Sloptank writes: Hey, stop that! STOP TH...what the HELL is wrong with Bombshell?
reanimate28 writes: megatron: starscream look at this, ever seen a fist so big......and you thought the probe-u-lator was rough...well this fist also transforms into a spiked mace...so get your rear exhaust port ready.
- Back to top -