Optimus laying down on the job 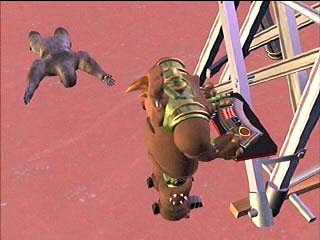 162 captions have been posted for this image so far ...

BG the Robit writes: What no one else knows is that he's throwing up all the beer he drank that morning into a hole under his facehole.
Mugshot writes: "Optimus, get up! They've finally got a caption that ISNT G1 or Animated!"
Lockdownhunter writes: Y U NO WORK?!! 073H$$V
Heckfire writes: "Geez, Primal, just light a damn match. There's no need for the melodrama."
"...wild...bean...vines...PRIMUS...I need...air..."
Unknown writes: Rhinox:I'm dissapointed in you.
STAY ABOVE THE INFLUENCE

/!\
/ ! \
!
Zeedust writes: In the end... 'twas BOB FORWARD killed the beast!
Sondura1 writes: Rinox:Oh Primus he's drunk again
DeltaSilver88 writes: Primal: WOOOOOAAAHHHH! *SPLAT*
Rhinox: HEY! Why the hell did you drop outta the sky like that?
Cheetor: He's trying to act out the scene from 'Band of Brothers'. See? He's gettin' up... The line!
Primal: To hell with that!
Angie Prime writes: Primal: Help! I've fallen and I can't get up!
Rhinox: Hm? You say something?
Primal:.....I hate you.
Rhinox: Shh! I'm answering do this caption contest thing with me and you in it!
Garurublue writes: "I swearz to drunk, I'm not Primus...*hic*"
- Back to top -
Roadshadow writes: What happens when Optimus Primal drinks too much whiskey.
Starbeam writes: Optimus Primal's Tarzan impression failed for lack of vine.
Thanatos Prime writes: Primal:Mmm... this dirt ain't bad rhinox, try some.

Rhinox: I truly am the only sentient being on this planet.
Zeedust writes: Rhinox: "Back to work, you lazy monkey!"

Primal: "But I've been building towers nonstop for three days, and I outrank you! I haven't slept, I've been so busy! Can't I at least get a lunch break?"

*Optimus* I can't take it anymore!! I'm gonna kill myself!!!

*Rhinox* Nope not gonna work
Optimus Primevil writes: Rhinox: Just a little more and i'll get that gorilla plush doll...
Unknown writes: someone forgot to tell Prime they emptied the pool
Cyclonus writes: Rhinox,realizing that in the next TF series, not only does everything suck, but he also turns bad and dies while Primal comes down with Alzheimers, decides to kill Primal and steal his voice box and sends it to Hasbro to use for Armada OP, with the guaran
Unknown writes: Rhinox: and that Prime is "Armada"
prime? prime?
- Back to top -
frank writes: "Optimus, you'll love sniffing this new energon glue!! Optimus...?"
Unknown writes: Optimus lays a killer far......
ToXmAn writes: Hail to Rhinox
Unknown writes: Rhinox: I told you to watch that first step...but did you listen? NOOO!!
Optimus: well thats just prime..Now get over here and help me up
Pokejedservo writes: Why Rhinox should not make towers on top of giant gumballs.
davewelttf writes: On one occasion Optimus primal forgot that his prime jets were removed for repair and this is the result
Firestorm writes: Imagine the tactical advantage from putting these radar sites up on hills.... is it just me, Optimus, or did the mountain suddenly vanish leaving us to hurtle to our deaths?
Unknown writes: After Rhinox turned down the marriage proposal, Primal got himself totally wasted.
Unknown writes: Rhinox: I have to do EVERYTHING Optimus? First i have to beat up Megatron and now everything depends on me! Prime.
Zeus writes: Rhinox: Hey Optimus, betcha 10 Energon chips you can't do a Quadruple flip with a half-twist from the top of this tower!
Optimus: You're On ... Here I Goooooooooooooo .........
Blmmmmmmph
- Back to top -
Unknown writes: OP: I could have sworn there was a swimming pool here just a minute ago... Rhinox: Optimus and booze, just don't mix!!
Skyfire the Artist writes: Optimus leaves the work to Rhinox while he samples the Pepto-Bismol flavored soil.
Unknown writes: Rhinox is subbing for Primal because P got a migrain from Megs.
Unknown writes: Why did Airrazor leave me for that punk@#*& Tigaron
raijinald writes: Quake message: Ape Convoy becomes bored with life.
Bluestreak writes: Optimus: Hey Rhinox look I'm Superman!!
Unknown writes: Rhinox:Ok, I got three questions to ask you fella. Who are you, where did you get that maximal brand time ship, and why did you kill Optimus?

Tankor:All you'll need to know is that you will know why I did that and you will thank yoursel... I m
Unknown writes: Rhinox: "Don't worry, Optimus! I have that fantasy-program of RatTrap out of you system in no time!" Primal: "Please hurry! Must stop humping the ground!"
Unknown writes: Rhinox playing real-life version of Beast Wars the Game as Optimus Primal. Guess who lost.
Unknown writes: Optimus, did you hear that boom? Optimus? OPTIMUS?!
- Back to top -
Firestorm writes: Whoa- Optimus must have made a high leap off the diving board. I don't think he's even come down yet!
Slappyfrog writes: Rhinox hated it when Optimus, drunk on energon, tried to fly while still in beast mode.
Unknown writes: Oh, for the love of Christ.... I didn't say no,Optimus, just not right now!
Unknown writes: Optimus tests his "I can fly in beast mode" theory.
Chachi writes: Rhinox: "Optimus, this is not 2001: A Space Odyssey and I am NOT building the Monolith! GET UP!"
Unknown writes: Rhinox: With this mind control, I can make mak u do what I tell u to, now, bow down 2 me!! OP: Yes masters! (Lies down)
BLACKBIRD writes: i knew should not have partyed to hard,oh my aching body
protoformX writes: "Oh, great and mighty Rhinox. I live only to serve..."
M writes: optimus gets drunk and passes out after reading the script for beast machines
Unknown writes: Rinox:Y'know,Optimus,a Bungee cord REALLY helps if your'e Bungee Jumping!
- Back to top -
Unknown writes: Primal after trying to note to all of these immature posters that airing your dirty laundry to the public is just a feeble attempt as sympathy from people, like him, who should not give a s&pound;!t, and don't.
Unknown writes: Rhinox: Great, nows not the time for you to get over energized again!
optimuslives writes: You know, we can't change the situation so what is the point of bitching about it. Obviously, there are problems, but that does not mean we should all jump ship and do nothing but bombard Ryan, what would you do if you were in his situation and
Stelartron writes: Optimus Primal after seeing how many pi$$ed-off people posted here. RHINOX: *looks over* Slag... he's overloaded again...
Unknown writes: Gasp! A dead Munky! Let's eat it!
Shermtron writes: whoa dude
Unknown writes: Rhinox: Optimus have many times have I told you, you can only fly in robot mode.
Unknown writes: Dang it, Rhinox! Stop leaving your tools everywhere!
Shermtron writes: Rhinox:geez optimus is drunk again on the job..
OP: burp!
Shermtron writes: look rhinox snow angels...
- Back to top -
Unknown writes: "WOW! That laser on top of this thing really works, doesn't it Optimus? Op...uh oh...
The Matrix writes: Tripping over a rock and knocking yourself cold. Another side effect of hunger...
- Back to top -