Worker on phone by Decepticons 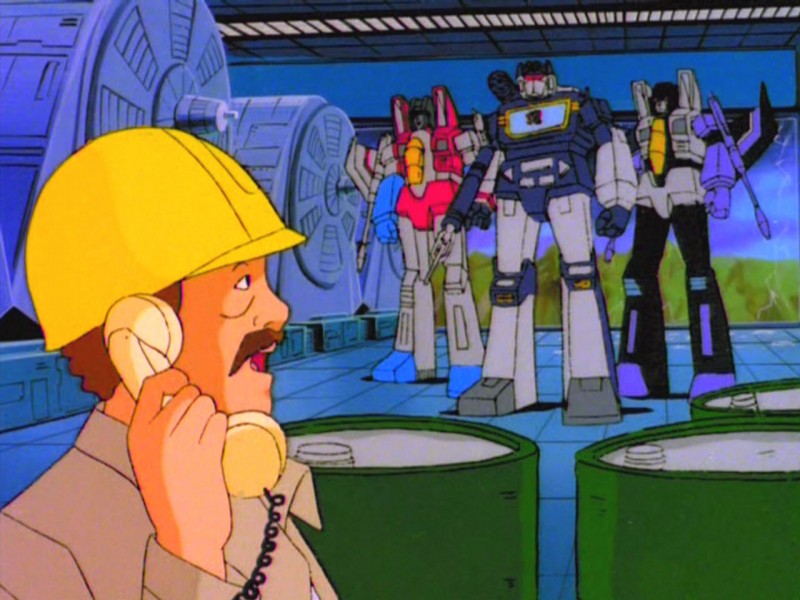 309 captions have been posted for this image so far ...

DeathReviews writes: "Hello, boss? Did you order any "D-Cuptions"...?"
-Kanrabat- writes: "Hello internet? I'd like to file a complaint about blatant scale transgressions."
Rainmaker writes: Worker: Yeah, we have three lost protoforms...
Optimum Supreme writes: Who you gonna call? CONBUSTERS!
Black Hat writes: "Hello? Yes, it's about these Masterpieces you sold me. I think they may be bootlegs."
william-james88 writes: Something came up, I'll have to call you back.
Ravage XK writes: Yes dear, it's happened again. Decepticons have invaded the Power Station. I know, it's the third time this season, you'd think we'd get wise to it by now. No, I won't be home in time for tea, I'll have to clean up once they go.
trailbreaker writes: "Yes, Sparkplug let me borrow his hat. Fits perfectly !"
Frenchhorngirl writes: "Yay, one of them is pink! Just look at him AND my happy little face!"
Fixit writes: Decepticons, party of 3?
- Back to top -
Heckfire writes: "Hey, Michael? It's your cousin, Marvin Bay. remember that movie franchise you wanted to start? Have I got an idea for YOU..."
Minicle writes: Worker: Yes Sir, the three applicants for the position of â€˜Head of Health and Safetyâ€™ have just arrived.
Halo2addict writes: Worker: I've got to lay off the halucinogenic shrooms!!!
Skywarp: I've got to lay off the expired energon cubes, it's causing me to halucinate!
Starscream: I picked a heck of a day to quit smoking energon dust!!
Soundwave: Why, what do y
seminole1 writes: Worker: Hello, Optimus Prime, can you dispatch some autobots to my job. Some decepticons just landed, and it looks like they're about to tear some s@#t up.
Judynator writes: Worker: Hallo? Police station?
Starscream: Hey buddy! We are not goon squad, but we the Decepticons!
Worker: Hallo? Autobot station?
TheTouch writes: Can you here me now...good.
Roadshadow writes: Human: Hello, is this Taco Bell? Do you happen to have anything that will turn anything red? Because Starscream here just got girly with condoms...
Skywarp: It was Soundwave's idea, honest!
Dragonoth writes: "They've shut down the main reactor! We'll be destroyed for sure!"
Masterpiece Prowl writes: Guy on phone: Some Decepticons to steal your Energon, sir?
Guy on other end: Do they have an appointment?
ninjabot writes: Hello is this the Union office?, Listen, I was wondering does workman's comp cover being attacked by giant robots???
- Back to top -
Zeedust writes: Worker: "Hello? U.S. Robotics? Yes, I need to speak to somene in tech support... No, I really can't hold, my robots don't seem to be Three Laws safe."
Kit writes: yeah? ok make that five large pepperonis
Zeedust writes: Bart's little hobby backfired when it turned out that there was, in fact, a Don Syndrome working at the power plant, and he and his Decepticon friends weren't in the mood for jokes.
galvanostril writes: paul: Get me the homewrecker! 'Es wrecking my home!
Defcon writes: Hello? Art Bell?
Kal-Seth writes: After Fred Called In " Giant Transformer Robots Wanting to Steal SOmething Called Energon" The Local Psychatrist took fred away from a little "chat"
Kal-Seth writes: " yea secruity you guys might wanna see this.... yes i feel fine i don't think i need to see a doctor why do you ask?"
Nightshadow writes: Worker: Uh uh.... Uh huh.... so...thats three Large Pizzas with Pepperoni Pizza on top... with energon? Whats energon..?
Decepticons: Hahaha, that guy doesnt know its us making a prank call!
Castle74 writes: Uh..yeah honey...don't hold dinner for me... yeah...looks like I got overtime...
shockwave_inoz writes: MAN ON PHONE: "Hey you guys! Is one of you Amanda Huggenkiss? C'mon, I'm serious - I want Amanda Huggenkiss now!!" SOUND and SKY: "MWAH HAH HAH HAH HAH HAH HAH HAH HAH HAH HAH HAH HAH HAH HAH HAH HAH HAH HAH!!!
- Back to top -
Galvatron writes: yes sir..they say they want the person responsible for beast machines brought forth.
Unknown writes: Soundwave: We might let you live on one condition.

Starscream: You bring us the only humans who are as metal as we are, METALLICA!!

Human: uh...sure, but in our world, metal is snubbed but we can play some Britney Spears.

Soundwave: Pay your taxes or be terminated.
Unknown writes: Soundwave: Just dial 101020, just one and the number!
Worker(on the phone): Hey Alf, your replacements for while you're on vacation are here!
Unknown writes: Voice on the line: "Sir, we've traced the signal. The calls are coming from-!" Worker: "...INSIDE the building? Yeah. I uh, just found that out myself..."
Unknown writes: Who ya going to call.... "Ghost.... whoops wrong 80's cartoon.
Unknown writes: Soundwave: "all i need now is a carrot top wig."
Unknown writes: worker: "yes i like a pizza"
turns around
Telephone: "hello? sir?"
Worker: "I said hold the ancovies along with the idiot delivery boys i said i come and pick it up::hang up:: hard to get good pizzas these d
bob writes: Can you hear me now?
Chrono writes: Your not gonna believe who just walked in...
Unknown writes: uh..yeah, sorry honey, i cant talk right now, im about to have my ass ripped open by giant robots.
Unknown writes: Soundwave says he wants to be RE-ISSUED next... or else he will destroy the Armada molds.
- Back to top -
jason writes: Hey! Did you order the 150,000,000,000 cases of beer? Because they want to know where to send it!
Unknown writes: soundwave- if your going to make a collect call dial down the center 1-800-c a l l a t t.
Unknown writes: Hang up the phone and hold on to your helmet, you're about to get 0wn3d
Unknown writes: Worker: "I'm sorry, even if you are temp workers you still have to go to the town hall and register!" Starscream : "Stupid Union rules!"
Unknown writes: Human: Doctor! I'd like to report a new Viagra side-effect!
Unknown writes: "can you here me now?"
Omega Supreme writes: Worker: Hello Hasbro main office you never told me you were re-relasing Soundwave.
Hasbro: It aint Soundwave it's his remold Twincast.
Worker: Oh I see my mistake!! *puts phone down*
Karnage writes: Worker>"WASSUP!" Guy on other end> "Yo, where's the 'Cons?" Cons> "WAAAAAAAAAAAAAASSSSSSUP!"
Unknown writes: We didn't order gaint robots - where's our pizza?
Unknown writes: Phone Guy: Hello, I wish to register Soundwave in your Robots Of the Year Contest. What does he look like? Yes, he has a dark blue rectangular body with twin guns and a closed face plate. *Soundwave leaves with glee*
Phone Guy Whispering: Actually,
- Back to top -
Unknown writes: Man: Operator, get me the Autobots. There's a Decepticon rumble goin on here!
Unknown writes: I thought I ordered the rest of the YMCA?!
Shadow writes: Hey Starscream, wanta accept a collect call from megatron? He sounds pissed.
Sky-Byte writes: Soundwave: We order 4 barrels with energy, not 3!
Starscream: We want the last one now, or we will shoot!
man: I will call the supplier.
what? you don´t have it no more? O, Boy! I have a BIG trouble now!
Unknown writes: "Mr. Starsmore? Your 2:30 appointment's here."
Hot Shot writes: well looks like we came to the right place
buddhaquest writes: ...and then the whiny one kept telling us that our helmets were out of fashion and that we should "be nice, sweeties" and...
Unknown writes: Don't worry, Mr. Unicron, your Energon shall be delivered in supersonic Lightspeed....
Unknown writes: ... Yeah I tell ya, the boss's a freakin lunatic! He just... oww.... *he what?* err look I gotta go now...
Unknown writes: Human:"Hello? Boss? Yeah, remember you said to call if anything 'important' happens? Does a bunch of big robots from outer space that want to kill us all AND steal electricity count? Oh, yeah, and the coffeepot in the employee l
- Back to top -
Ricochet writes: Poor joeyluvs269, a few crazed fans heard what he was saying and deployed there own Transformers on him. He is calling to tell his buddies that he won't be %*#) them tonight.
Unknown writes: Hey, you mail order bride people are fast, I'll take the one on the right.
Unknown writes: "Hey, boss, some robots showed up sayin' they've been called here to take down joeyluvs269 for being an ass."