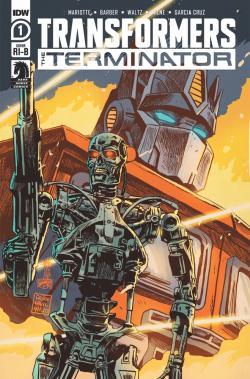 Everybody's Dead
A Review of Transformers vs Terminator #1

Honestly, not much to spoil here that hasn't been shown in the preview 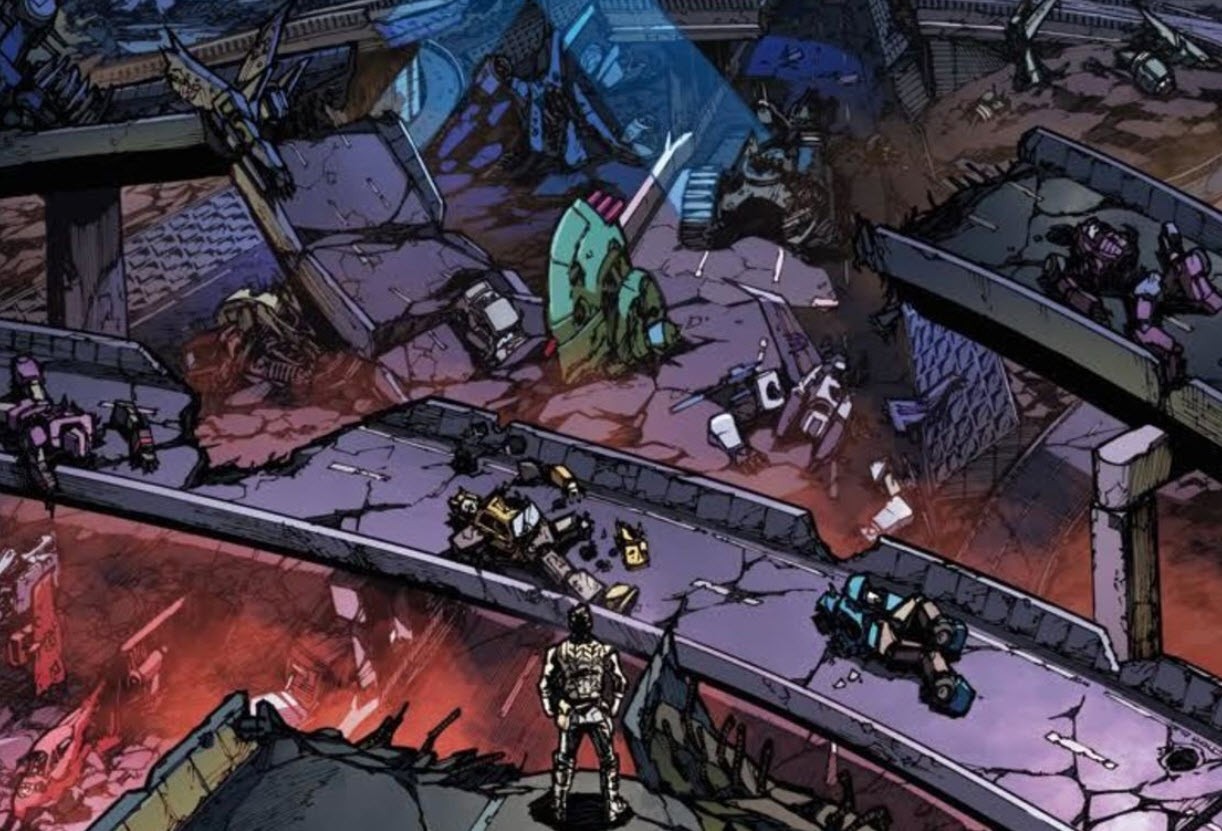 This is a special week in the world of Transformers comics because not only are we getting two books, but these two books are the last we'll be receiving for a while.

And one of them happens to be Transformers Vs Terminator, a book that intrigued quite a few. I know it intrigued me. The fact that the now legendary Transformers artist Alex Milne was attached to it, made it even more of a must check out. And now it's here and while I am still just as intrigued to see where it goes, the first issue didn't really do it for me.

My main issue here is that the first issue is very derivative, on purpose. It's basically just a retelling of the terminator lore, filled with the typical lines so that someone can say "oh, he said the thing!". It didn't make for the most engaging read.

I much prefer the first few pages which were already shown to all in the preview which show the future all out war of Transformers vs Terminators, featuring new Transformers designs by Alex Milne. 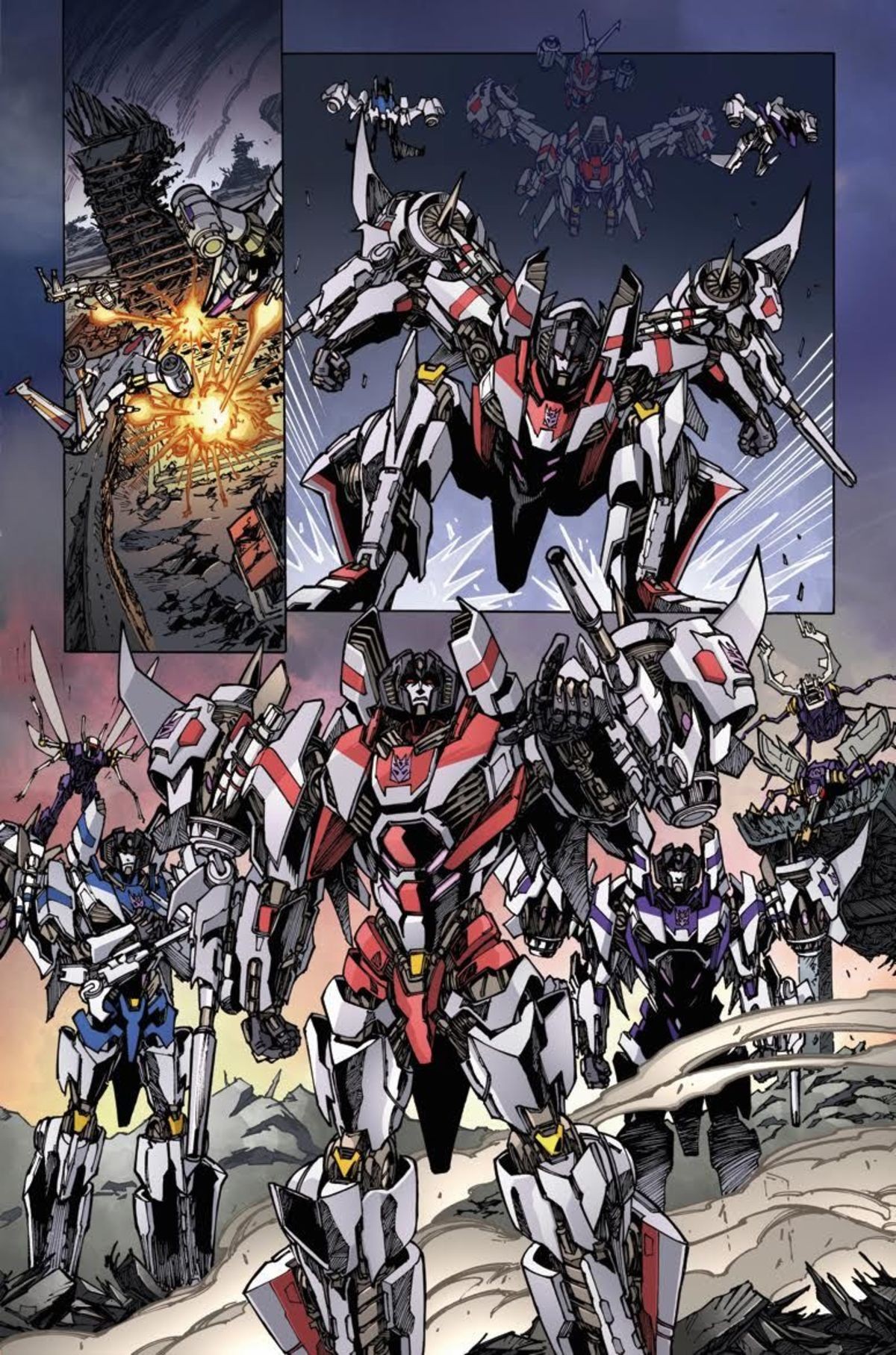 Speaking of the art, that opening is also where we see the most bots and thus where Alex Milne shines most. Now don't get me wrong, Alex Milne is as fine an artist as they come, but he has this amazing skill for depicting Transformers which really make him stand out compared to everyone else. However, when it comes to humans, there isn't as much in the style that makes him stand out. 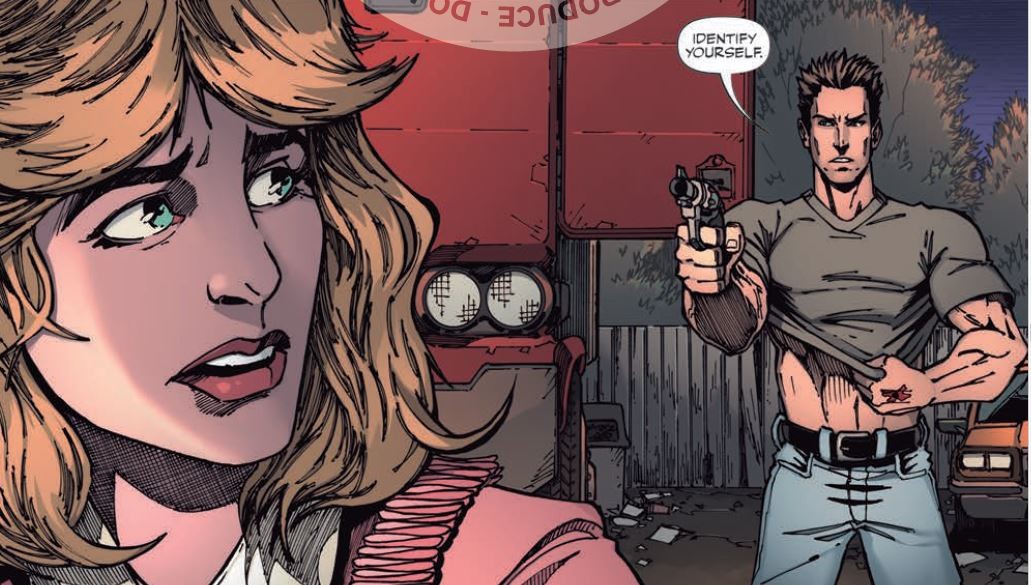 Also, while he does aim for Sarah Connor to look like Linda Hamilton, I did not realize that the terminator was supposed to be of the Arnold variety. It could be Michael Beihn as much as it could be Arnold (which is actually what I thought they were going for at first, like some sort of switcheroo) or Duke from GI Joe. So that iconic Terminator aspect, which the script is clearly going for, is lost in the art too. When I read the panel you'll see below, I realized the author was hoping we'd been reading the Terminator's dialogue with Arnold's accent but the art never gave us indication of that so it took me out of it. It's like the nuts and bolts of the comic suddenly appeared and I saw a writer inserting some dialogue to make up for them not being able to get the rights to an actor's likeness.

Just a side note, I did find it interesting that the Terminator drives an Optimus Prime looking truck in this issue, smashing into cops, when the T-1000 drove a "nemesis prime" deco of a similar looking truck in Terminator 2, while dressed as a cop.

The final splash page is enough to have any fan want more, I just wish the first issue as a whole felt more meaty rather than just going through the motions to get to that final page. It was an average issue overall so I'll give it an average score.

This issue is out today, March 25th, and you can pick it up at the Seibertron.com eBay store or at your local shop, check here to find the closest shop to you, but you may want to call to get their operational status before making a trip.

Posted 2 days ago
News Categories: Toy News, Movie Related News, Comic Book News, Cartoon News, Site News, Rumors, Event News, Digital Media News, Collectables, Game News, Sponsor News, Site Articles, Store News, Company News, People News, Press Releases, Sightings, Reviews, Unlicensed Products News, Auctions, Transtopia, Interviews, Knock Offs, Collector's Club News, Editorials, Heavy Metal War, Podcast, Contests, Book News, Top Lists
Click here to post your comment about this news story!
Re: IDW Transformers Vs Terminator 1 Review (2057804)
Posted by Stormshot_Prime on March 25th, 2020 @ 10:09pm CDT
I have to somewhat disagree with this review, considering how highly praised the past few crossovers have been rated (Star Trek, Ghostbusters, etc). Of course it's derivative, it has to set the frame of the universe. The past crossovers have established that a vague G1-ish story has happened to our Cybertronian faves, their lives put down in an already established universe. The Transformers have always been an additive to these seemingly canonical crossovers. So this time, there's nothing wrong with both universes having to establish themselves, considering once again the TF side of the crossover is once again reduced to the basic "G1 Ark 4 million years in the mountain" storyline. Terminator mostly does the same; a single T-800 sent back to 1984. With no specific set of canon to root itself in (AND considering Terminator is the Earth based franchise), this story has to establish the going-ons of Earth first. It's a fact; in all of these crossovers, the TF franchise is always the secondary. "how can we squeeze this in?" kind of thought.

So many crossover's have to spend time establishing the casts of each franchise getting to know each other (Oh but watch out they may disagree at first!), I'm so happy that this one casts those expectations aside to create an engaging story. It presumes familiarity with each franchise, and why shouldn't it? I don't think there's a single person on here who doesn't know the basic original backstory for either franchise.

All in all, if you like it or you don't, but I think this is a pleasing entry in the steady stream of crossovers coming out in the TF franchise. And like it or not, I think we ALL should push for this recent crossover trend to continue.
Re: IDW Transformers Vs Terminator 1 Review (2057834)
Posted by Burn on March 26th, 2020 @ 6:59am CDT
When you hear "Oh there's going to be a comic series where Transformers crosses over with Terminator" you're first instinct is to think of Transformers/New Avengers and go curl up in a corner and cry as the traumatic memories of that abomination come to the surface.

But then you take a deep breath and rebuild the walls that hold the bad memories at bay and you think to yourself "WHAT THE FUDGE? HOW THE FUDGE IS THAT GOING TO WORK?"

And it's a valid question, giant robots versus human sized robots ... come on, no contest!

If you're thinking that, like I was, give this book a go.

So how the hell do you make that work?

Well ... IDW and Dark Horse have done it. They've taken both franchises, and given the origins a tweak here and a twist there.

And that's the basis of this first book. Twisting and tweaking as both franchises come together.

It's not a blow your balls off story, it serves one purpose and that's to establish how they two franchises are together. It's like climbing onto a mechanical bull, you've climbed on, and the book ends just as the operator hits the start button.

I had my doubts, but I feel IDW/DH have done a great job with this issue of establishing how the two franchises have come together. I look forward to the next issue.
Re: IDW Transformers Vs Terminator 1 Review (2057852)
Posted by william-james88 on March 26th, 2020 @ 11:26am CDT

Burn wrote:It's not a blow your balls off story, it serves one purpose and that's to establish how they two franchises are together. It's like climbing onto a mechanical bull, you've climbed on, and the book ends just as the operator hits the start button.

To me, this functioned very similar to the Ghosts of Cybertron crossover issue 1, different franchise, more dark than light-humored, but it still did the same, looked really good doing it, and set up an entirely inverted Terminator story: THEY are the resistance, and the Cons are the ultimate bad guy aggressors.

I really liked it for that, I would've given it at least a 3.5, maybe a 4, much like how Ghosts of Cybertron got a 4 in its review.

PS: I really want a seeker 3 pack using those designs as the SDCC exclusive this year
Re: IDW Transformers Vs Terminator 1 Review (2057975)
Posted by ScottyP on March 27th, 2020 @ 7:24am CDT
Nice review Will! Very agreed with the assessment about it being an average comic, can't think of a better term. Fun, quick read and then it's over. Not bad, but nothing mind blowing either.

I was thinking more Cybertron-esque, but that was just based on the shoulders and lower legs more than anything
Re: IDW Transformers Vs Terminator 1 Review (2058081)
Posted by william-james88 on March 27th, 2020 @ 7:00pm CDT

I was thinking more Cybertron-esque, but that was just based on the shoulders and lower legs more than anything

That was brought up on our facebook page. Apparently it's partly based on the Cyberyron design but I think it's just a vew aspects used as inspiration rather than an interpretation of that design.