UK Transformers Sighting Round Up 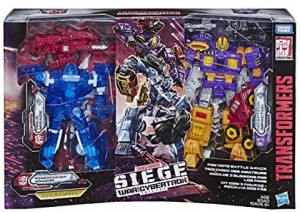 Greetings Seibertronians! We've got a round up of sightings for those who live in the UK. Courtesy of fellow Seibertron user, blackeyedprime, we've learned that all of the Bumblebee Greatest Hits Toys featured in the Argos catalogue and its online store has received price cuts! This means that you can grab the repaint (and slight retool) of Titans Returns Soundwave for just £19.99! Also the set featuring his three legend sized minions and the one step Bumblebee is now just £8.99. More bargains including price cuts on Power Charge Bumblebee can be found here 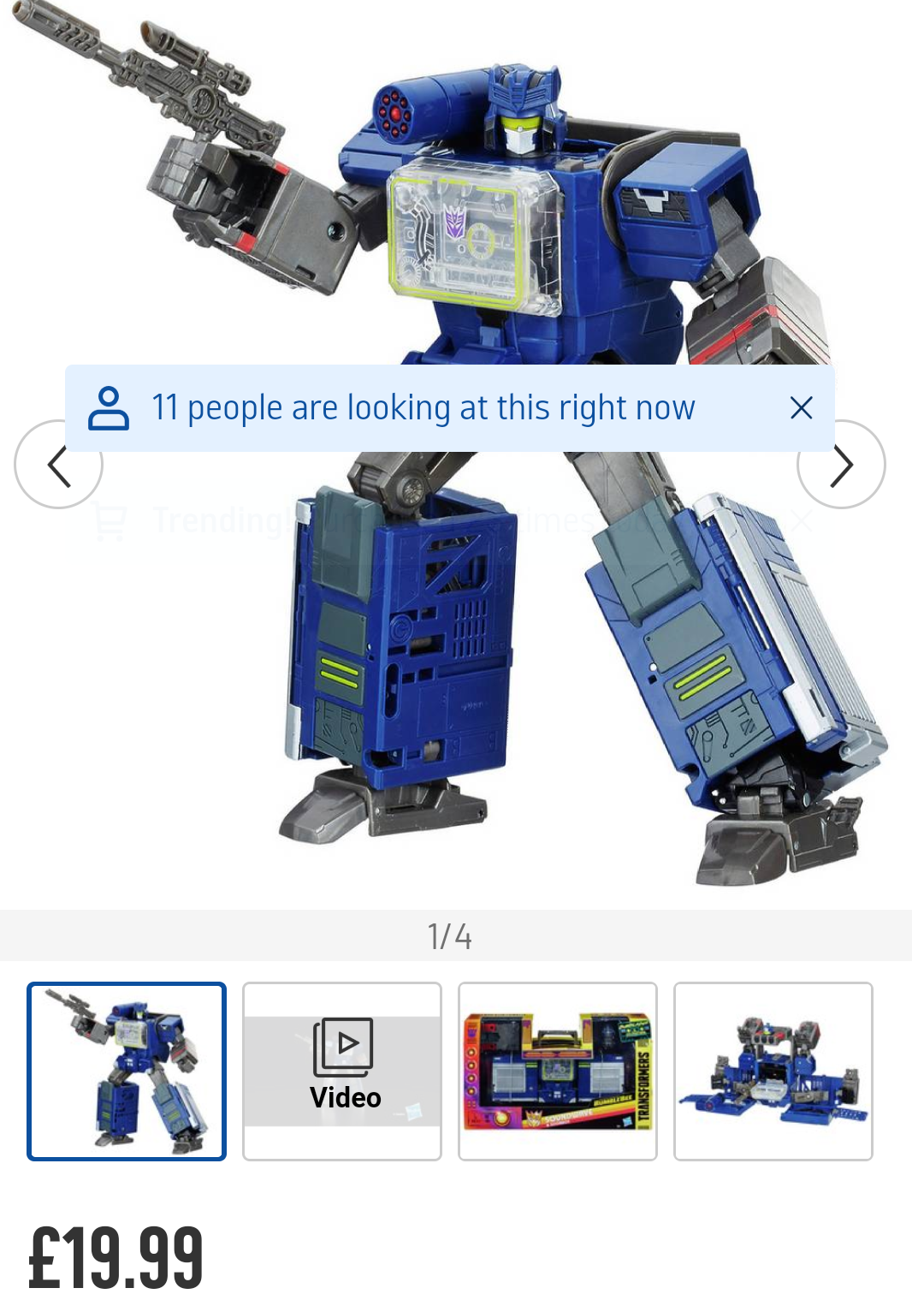 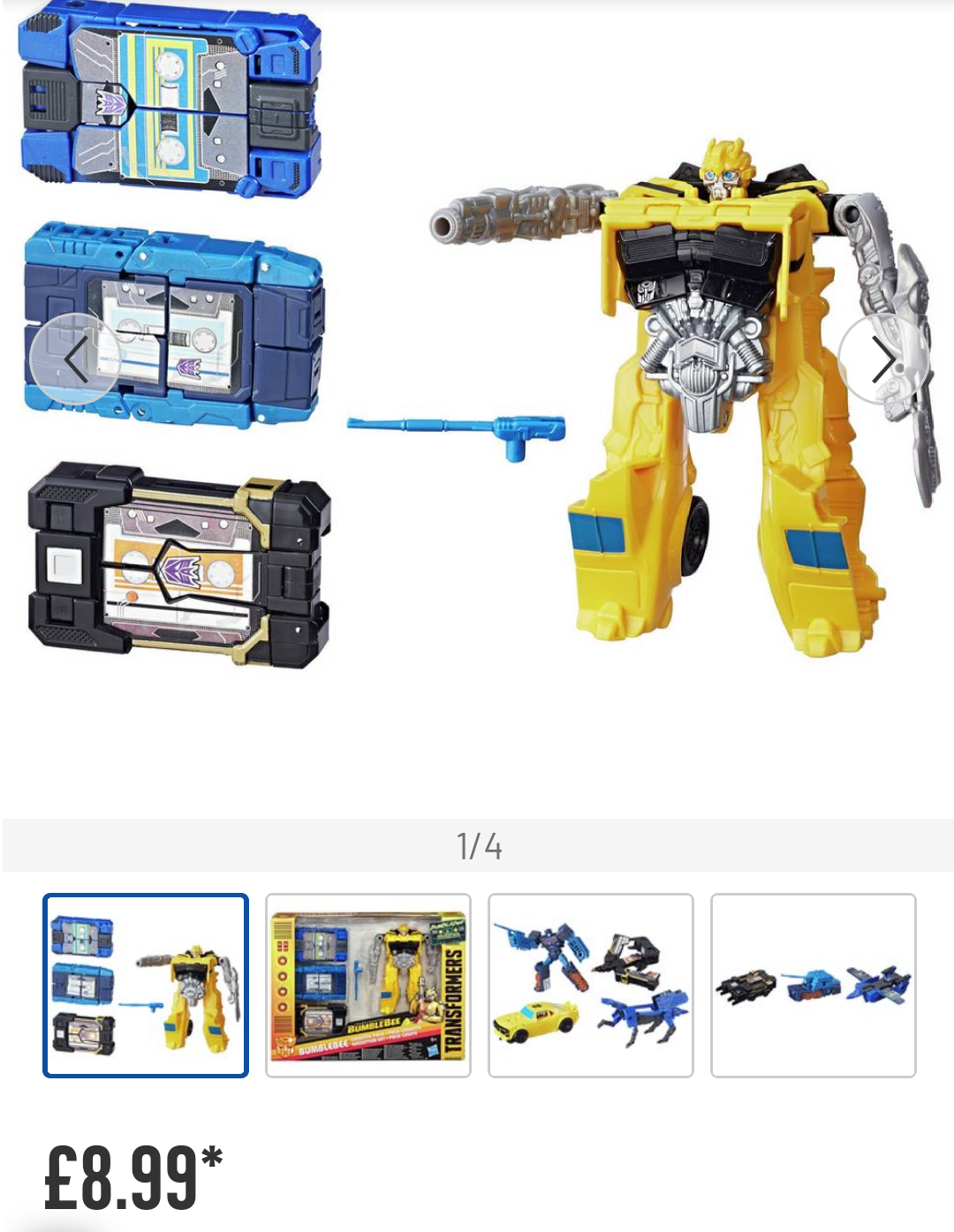 On the Cyberverse front, the range of Spark Armour figures is also available including Ark Power Optimus Prime (who is listed at being £47. Currently Starscream with Construction Vehicle is the only one at the £16 price point, with additional listings for Elite Optimus Prime With Jet Armor (for £24) and Elite Bumblebee with Battleship armor (Also £24) 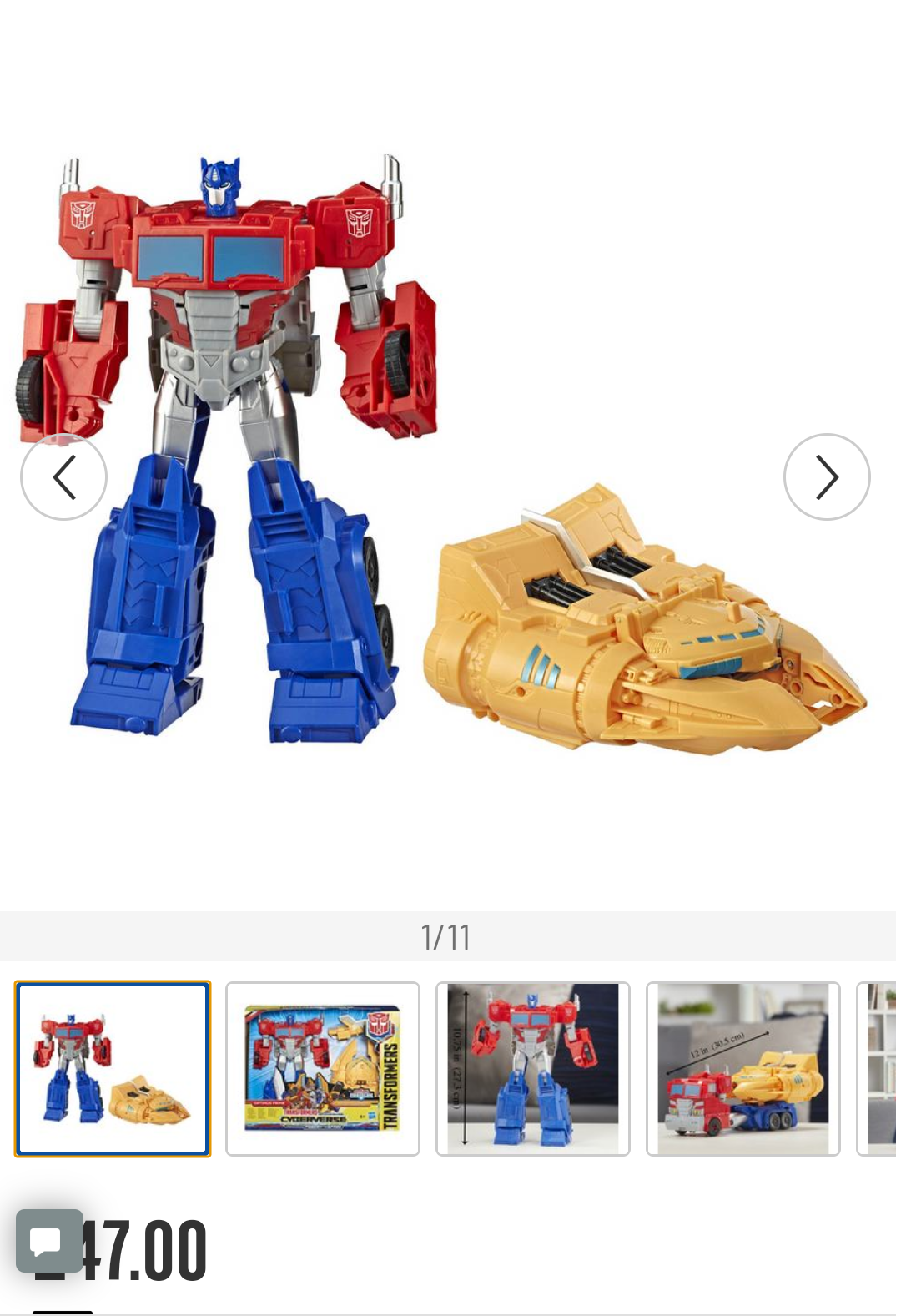 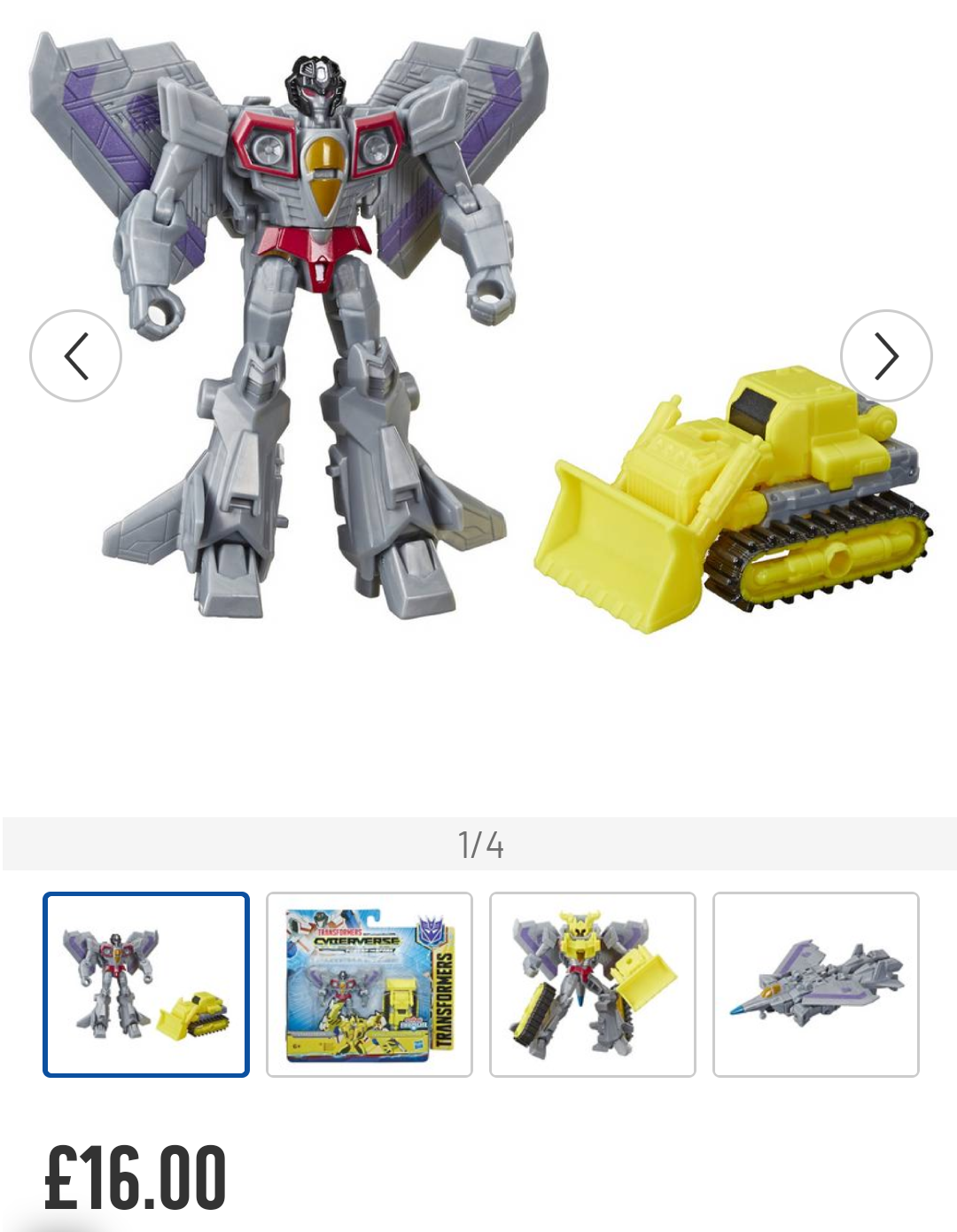 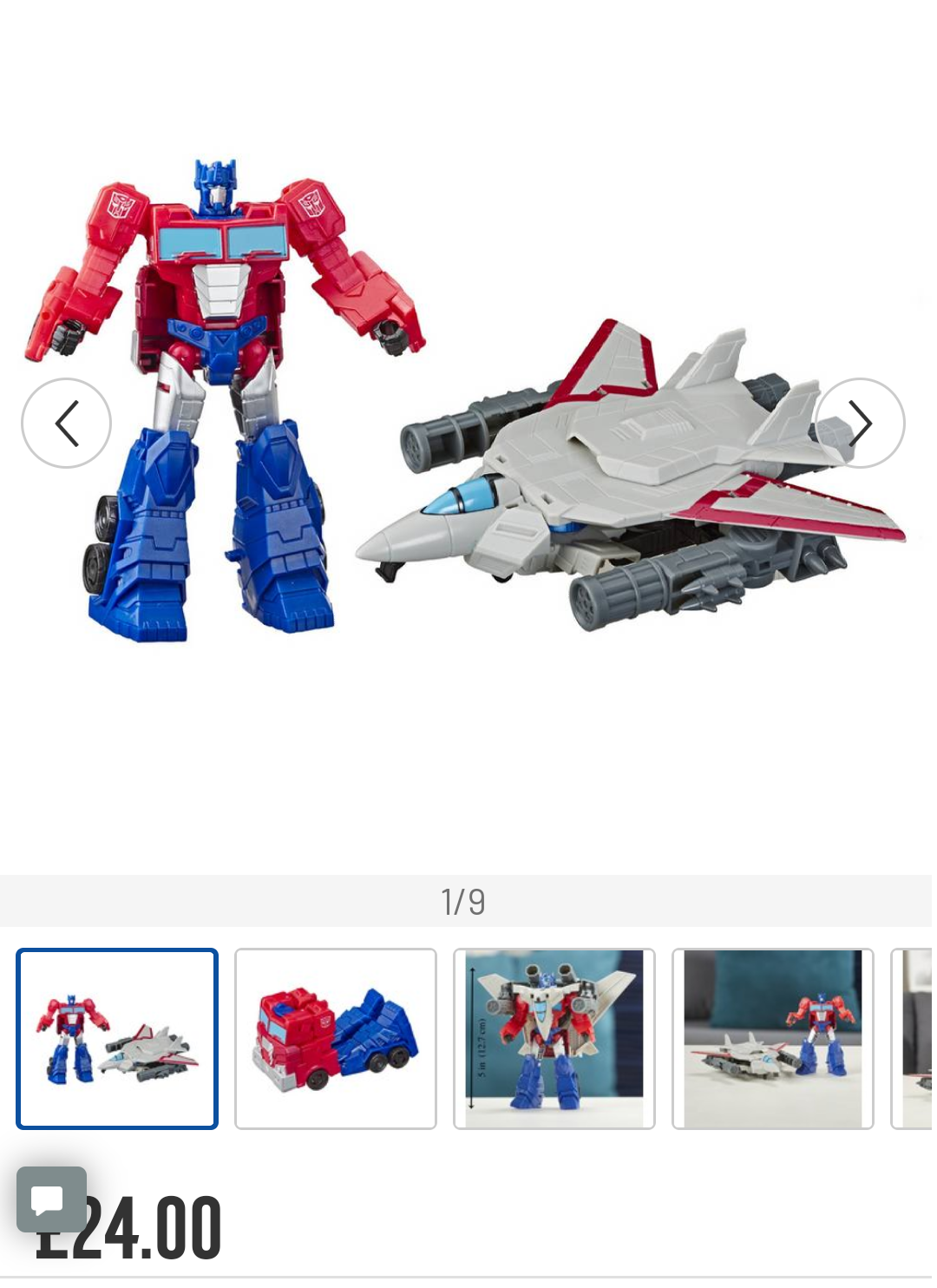 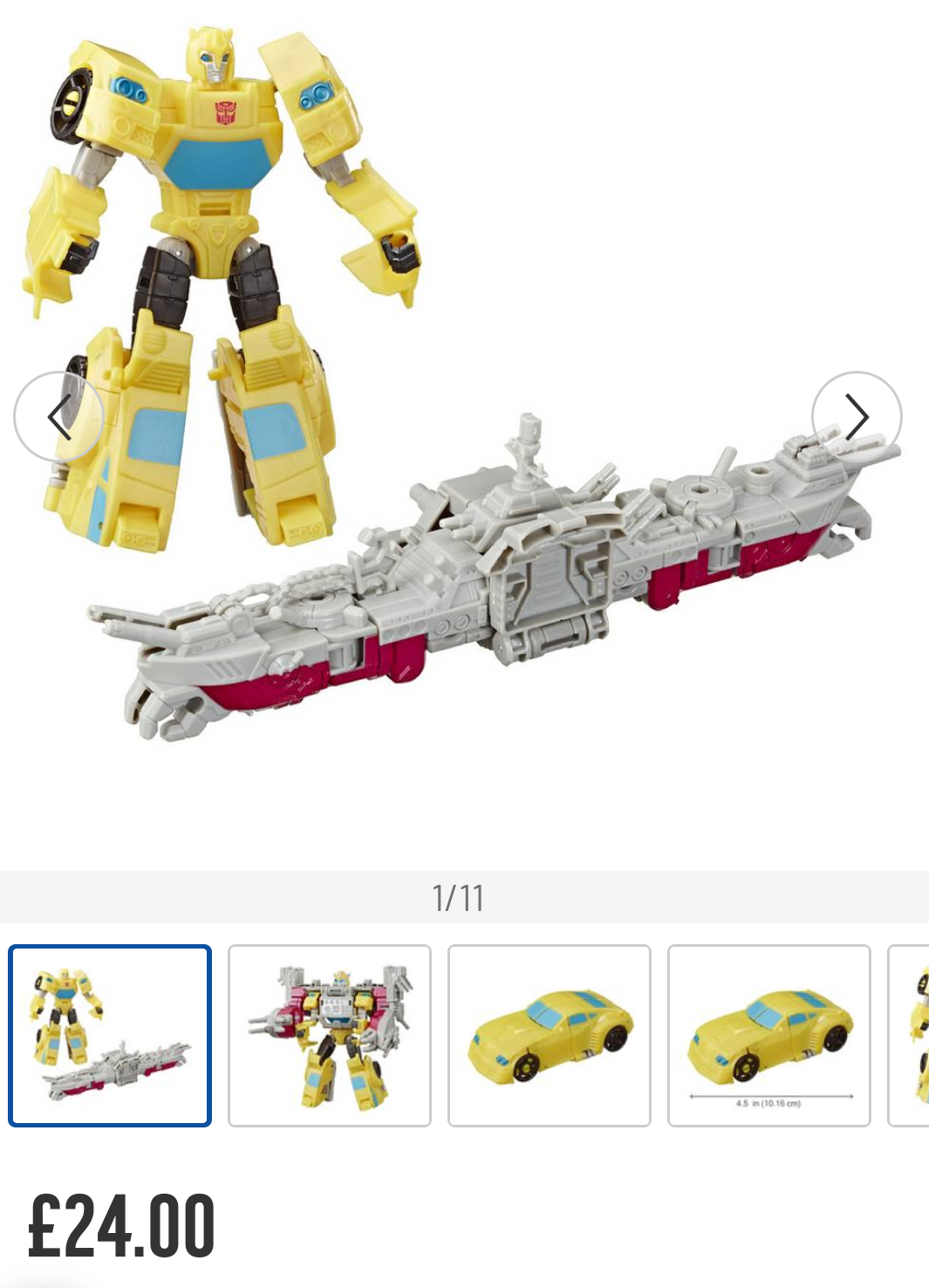 On the Siege front, a listing has appeared for Springer on Symths.con, retailing for the normal voyager price of £23.99 and due for release in August. 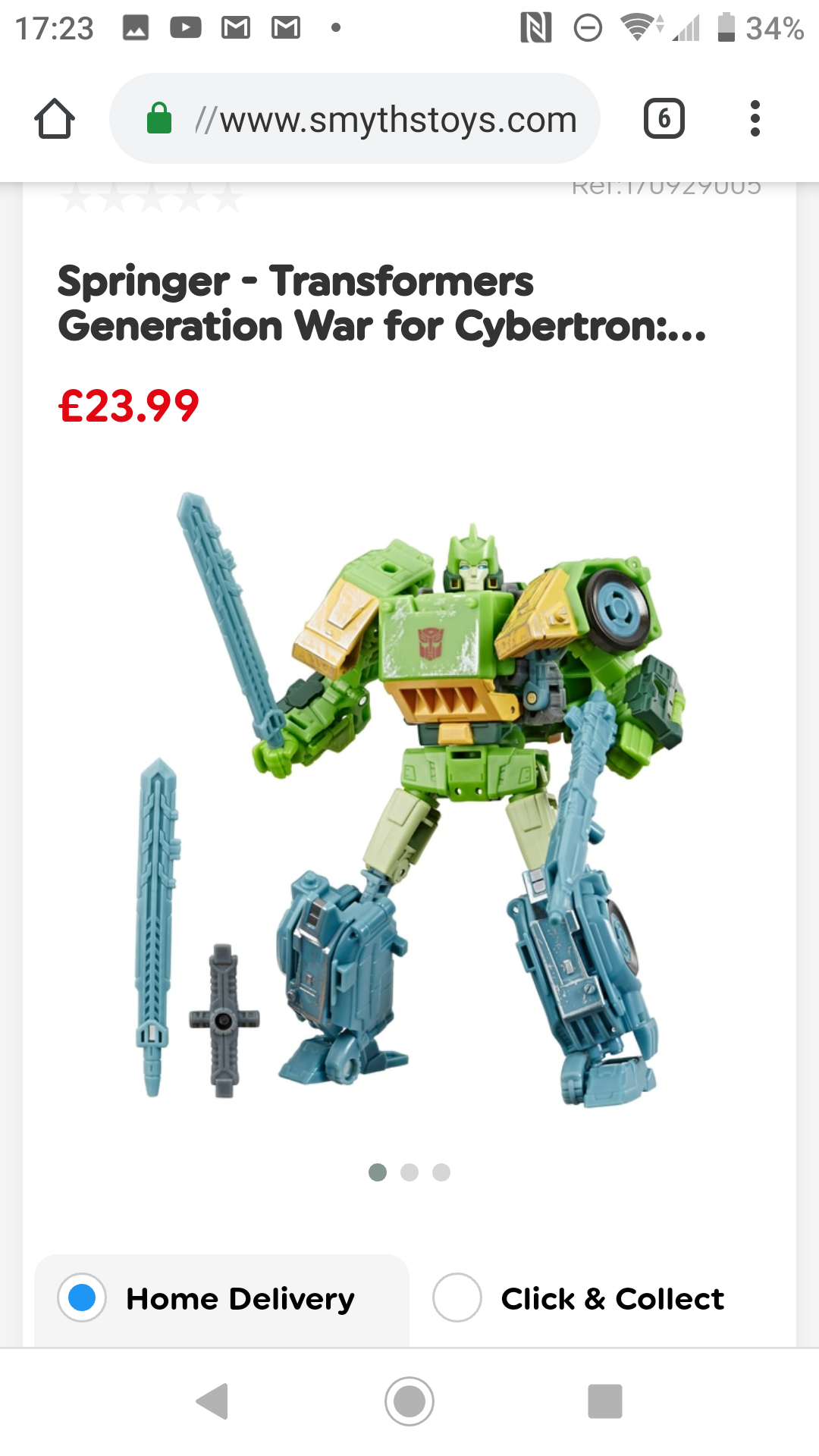 Yours truly has also found a listing on Amazon.co.uk for the forthcoming Transformers War for Cybertron Siege Fan Vote 3 pack, featuring Autobot Mirage (with different head and cast on blue translucent plastic), Autobot Aragon (a redeco of Weaponizer Cog with new head) and Decepticon Impactor (with a new IDW inspired head. The set is listed for £65, and means UK fans won't have to miss out getting these figures. 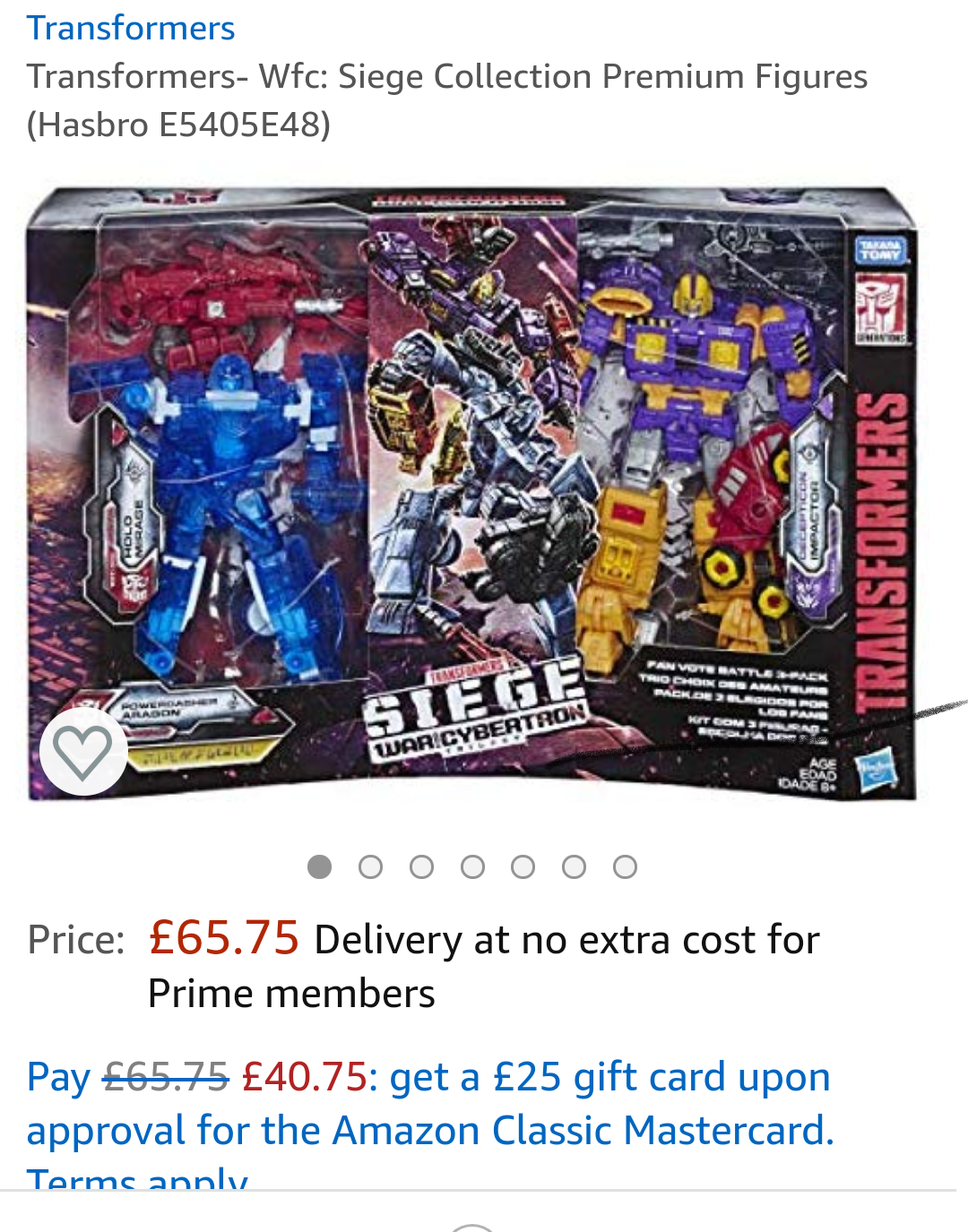 Are you a UK fan who is planning on jumping on one of these? Let us know in the Energon Pub and stay tuned to Seibertron for all the latest news and reviews.

The first is a sighting from fellow Seibertron user, blackeyedprime and concerns Movie Masterpiece 08, Transformers 2007 Megatron. Forbidden Planet stores are now stocking him and he's available from their website for the price of £140. 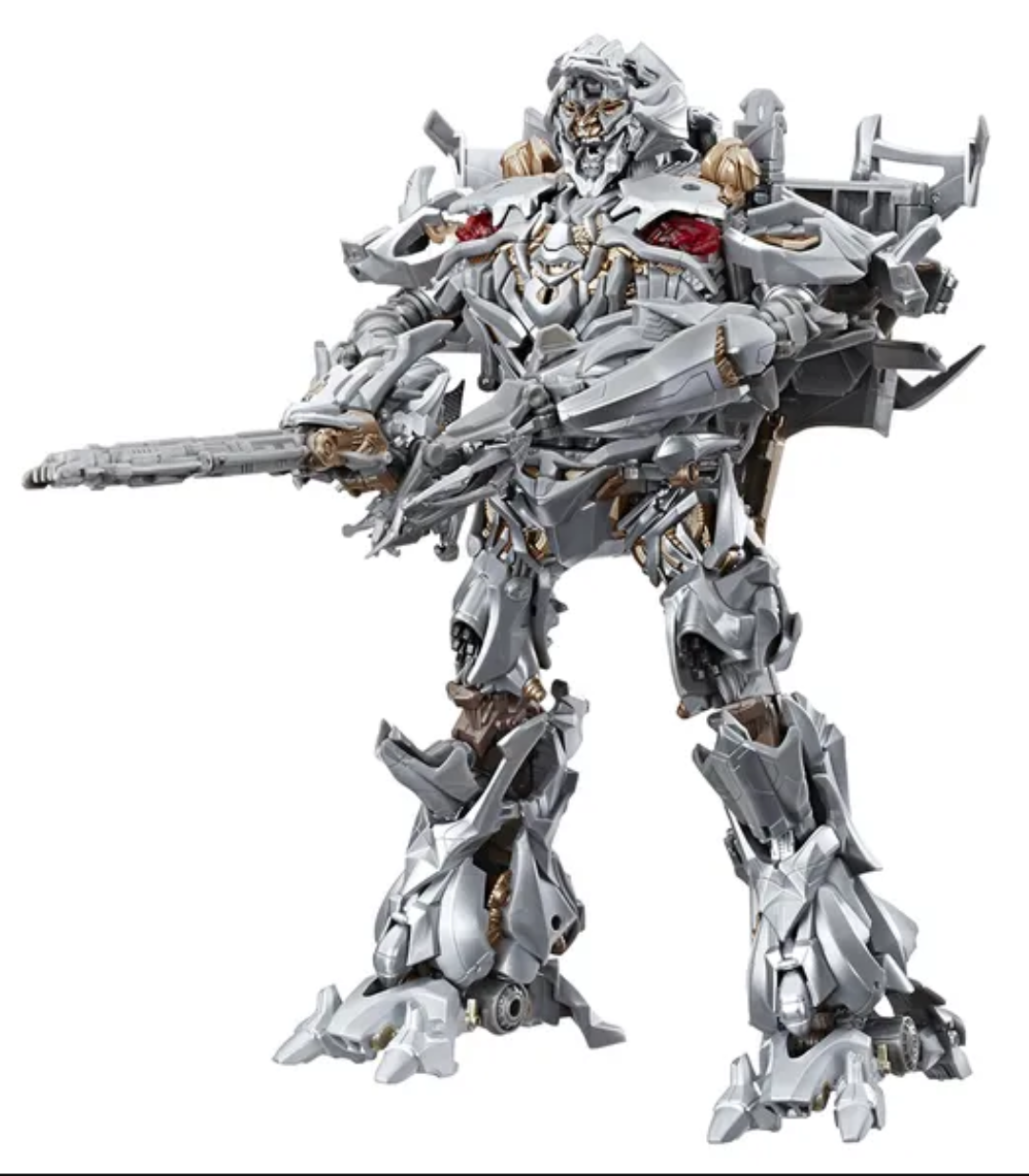 Looking for Siege Wave 3? Then fellow Seibertron user, CyclonusG1 has you covered. According to him, several listings have been updated for wave three on the Symths website, announcing that they'll appear in stores in mid August, so those hunting in-store won't have to wait long to get their three Reflecktors. Each costs £16.99. Check the listings below: 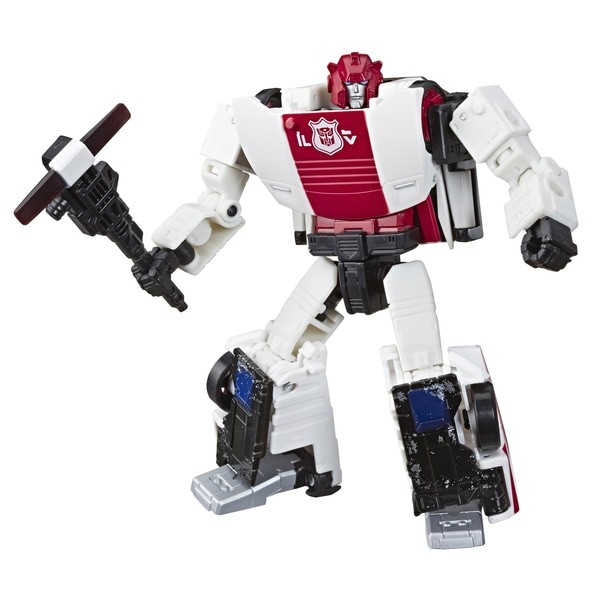 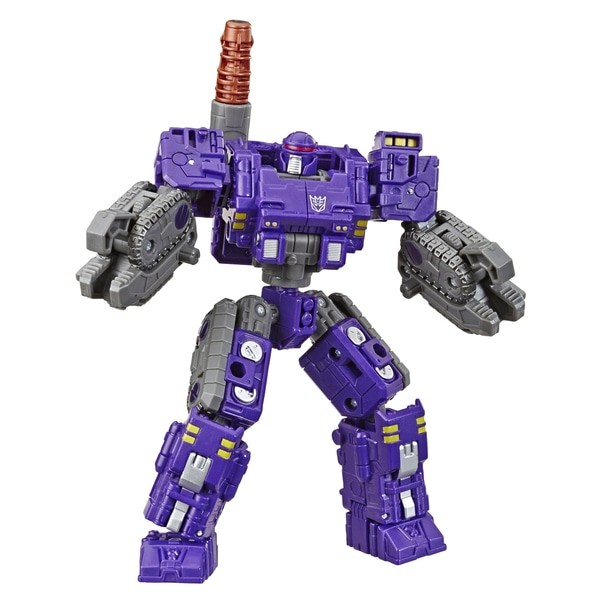 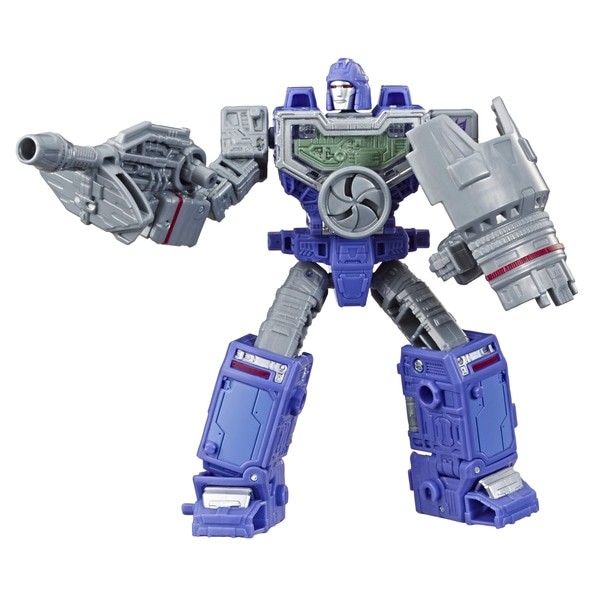 ZeroWolf wrote:Also the set featuring his three legend sized minions and the one step Bumblebee is now just £8.99.

Is there anyone in the UK that lives near an Argos who could pick up this set and send it to The Netherlands? I'd be very greatful!
Re: UK Transformers Sighting Round Up (2031174)
Posted by CyclonusG1 on July 23rd, 2019 @ 2:30pm CDT
So, for those of you interested, Kapow has preorders for the animation colours of Optimus Prime and Megatron listed at £27.97 each. Also, according to their facebook post, these figures will be exclusive to their store in the UK.

but it's worth spreading the word for any UK fans who want these. Though will we now start to see an increase in UK exclusives between the few retailers we have?
Re: UK Transformers Sighting Round Up (2031361)
Posted by blackeyedprime on July 24th, 2019 @ 12:51pm CDT
Lancers ID toys exclusive, guessing the retail stores dont want them o.O

The painted wheels really dont go with her set mates but I'd still need the other two from a mold I'm not that in to.
Re: UK Transformers Sighting Round Up (2031363)
Posted by ZeroWolf on July 24th, 2019 @ 1:41pm CDT
This is interesting, so Lancer is exclusive to in demand toys while Kapow grabbed the cel shaded prime and megs...Question is who will grab the Seeker set.
Re: UK Transformers Sighting Round Up (2031474)
Posted by blackeyedprime on July 25th, 2019 @ 3:54am CDT
Bluestreak is ID exclusive too

Pros: It's £20 so its cheaper than Lancer and not costing much more then a retail deluxe.

I dont think anyone had exclusitivity and Kapow/ID just imported them rather being uk stock which would hopefully explain the inflated £33-£35 price tag on her.
Re: UK Transformers Sighting Round Up (2031538)
Posted by ZeroWolf on July 25th, 2019 @ 3:07pm CDT
I see

I checked both sites and saw they both had Red Wing yet if seemed that was import only more or less.
Re: UK Transformers Sighting Round Up (2031887)
Posted by ZeroWolf on July 27th, 2019 @ 7:39am CDT
Just found this on Argos website
https://www.argos.co.uk/product/9337774, a listing for Cyberverse Spark Armour Ratchet. Asking price £16.99
Re: UK Transformers Sighting Round Up (2032895)
Posted by blackeyedprime on August 2nd, 2019 @ 7:50am CDT
CyclonusG1 may have already mentioned it, but listing for Siege Jetfire on Smyths website at £79. I reaaaalllly miss the £ being 1.5 dollars.

final edits, and this is why paying £79 for a jetfire is freaking nuts, if stores actually stocked figures and sold them a bit cheaper in the first place then they wouldnt have to do crazy clearance prices on ranges (which are damn current)that they are no longer supporting.

its money wasted on ordering them from the supplier and they wont have got the slight discounts per order size too. Toysrus may be getting some company in the years to come.
Re: UK Transformers Sighting Round Up (2032906)
Posted by blackeyedprime on August 2nd, 2019 @ 8:23am CDT
Can we get amazon to price match? Never done that before.

Enjoy the hunt for all those that find any goodies