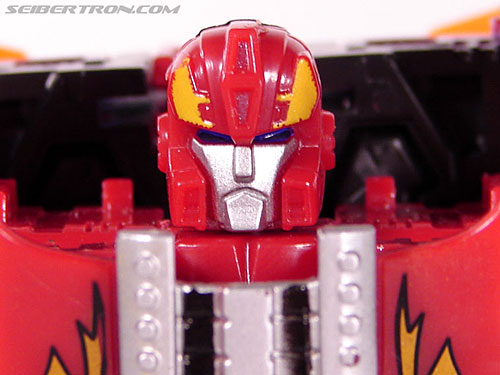 Young and bold, RODIMUS races headlong into danger, throwing caution Â¡Â¦and his orders Â¡Â¦to the wind. He dreams of heroic deeds and hopes one day to gain the recognition his actions deserve. Despite his inexperience, he is a talented fighter. In battle, he can often be seen racing at speeds up to 180 miles per hour, dodging explosions and laser blasts in an attempt to close on his objective.

Profile: After Klo, it seemed only Hot Rod would have followed Optimus Prime anywhere. All the better that heÃƒÃ… be following his commander back to Cybertron.

Once home, he immediately got back into racing. HeÃƒÃ… run simulations through thousands of times during his centuries away from Cybertron, but nothing matched the real life run along the equatrorial straight-aways. No atmosphere transmits a sonic boom so sweetly as on Cybertron.

Still, as much as he loved it, something about racing seemed so pointless. In the end, a race is just driving around in circles. He went back to Optimus Prime and asked him what he could do to help.

He found the administrative work he was given oddly satisfying. The rehabilitation of Cybertron was a vast project, with millions of variables to be taken into account. Millions of refugees from the war came flooding home - including a sizable Decepticon contingent.

All of those millions needed shelter, fuel, and a function, but almost as important was entertainment. The last thing Prime wanted was bored robots at each othersÂ¡Â¦throats.

Hot Rod was the natural choice to chair the Cybertron Grand Challenge; a race of epic proportions, open to all. It spanned the globe, and even included several moons of a nearby gas giant. That year, the second place team was a combined Autobot-Decepticon team; a metaphor for the new Cybertronian peace, for which Hot Rod was given full credit.

Soon after, Hot Rod changed his name to Rodimus, partly in homage to the commander he still idolized, but also as a reflection of his newfound maturity. He grew to become one of Optimus PrimeÃƒÃ” most trusted seconds, and was the second member of he team asked to return to Earth to find and destroy Megatron. Remembering the monster that had chased so many away from Cybertron millenia ago, he went without a second thought, determined to see that Megatron would never again terrorize a citizen of Cybetron.
Abilities: Without his former Targetmaster partner Sparks, RodimusÂ¡Â¦offensive capabilities are greatly reduced. He still carries a photon laser modeled after SparkÂ¡Â¦weapon form, but its accuracy and power do not match that of the original weapon. However, Rodimus is just as fast as he was, and maturity has brought with it a more nuanced tactical outlook. Despite his reduced damage capacity, he is a much more effective fighter and team member than he once was.
Weaknesses: Despite his recent years of experience, he can still sometimes be rash and overeager. He is still an adrenaline junkie, ready to rush into danger at a momentÃƒÃ” notice. This can sometimes overwhelm his more circumspect nature, placing him in troublesome situations.
[ Back To Top ]