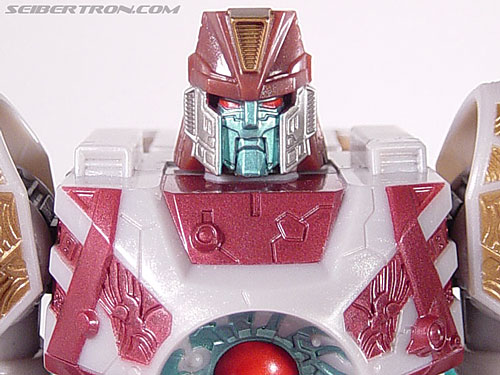 Vector Prime is one of the first Transformers. A powerful, wise and incredibly ancient warrior, he has served as protector over Cybertron since its beginnings. Pulled out of the shadows of time by a distress signal broadcast by his damaged planet, he arrives too late to save Cybertron without assistance. Arising from an era in which all Transformers lived in harmony, he is unaware of the conflict between the Autobots and Decepticons, a fact that Megatron uses to trick him and steal the map to the lost planets and the planet keys. Realizing his mistake, he joins Optimus Prime and pledges his knowledge and skill to the desperate quest to retrieve the planet keys before Megatron.

Profile: It is impossible to encompass all that Vector Prime is. One of the very few truly unique creatures in all the Multi-verse, he has walked the time stream from its raging headwaters to its muddy, strugging ending, where it bleeds out into the ever more infinite sea of entropy that marks the passing of every totality. His vision is limited only by the borders of space-time, but that there is yet more beyond he has no doubt.

Created by Primus at the very beginning of its struggle with Unicron, where most of the newborn universes were little more than swirling clouds of ionized hydrogen, his was the most complext task of all the original 13. Drawn from the sublime material of a multiverse at the far end of entropy, he is the very soul of order. at his heart thrum the subtle mathematics taht govern the movement of quarks, the slow spin of galaxies. Before his eyes run the lines of force that tie all things back towards their center, back towards Cybertron.

Vector Prime's might has dwindled over the years, his boundless energy taken up in the never ending task of maintaining the Goedian mechanics of space-time. As the multiverse has run down its inevitable course, so has Vector Prime aged - his systems shutting down piece by piece, code taht once ran at the forefront of his mind forgotten, files fragementing, memory sectors burning out.

As he aged, and as the weight of Time builty up within him he found himself less and less engaged in the linear universe. With both Primus and Unicron dormant - their endless conflict for the moment ended - he withdrew from the flow of time, submerging himself in a dimension of probability, in which all moments and all possibilities exist concurrently.

He emerged occasionally to correct serious disruptions in the ordered flow of events, but he did not return to Cybertron until called by Vector Sigma - the vast, interdimensional mainframe that connects all aspects of Cybertron to one another. Now, he has returned home to find the multiverse he was created to protect in danger of being torn apart at the seams.
Abilities: Any disscussion of Vector Prime's abilities would be fruitless without first mentioning his sword, Rhisling. Extraordinary for its properties as a tool as much as for its powers as a weapon, Rhisling is the means by which Vector Prime interacts with spacetime.

Forged of etherial supermatter, its edge is fine enough to slice through the very fabric of reality, allowing Vector Prime to move from dimension to dimension, or alter time itself. The heat of the blade can be used to heal any damage it inflicts. Wielded by a master swordsman such as Vector Prime, there is no finer weapon in existence.

Vector Prime's sensory equipment - housed in the bottom section of his vehicle mode - is capable of detecting objects and energy signatures at a distance of 12 parsecs, and is fine enough in its resolution to pinpoint a subject within only a few meters. He also has a temporal mechanics analyzer that allows him to generate a potentially schematic starting at a specific point in space-time, thereby predicting likely courses of action. This essentially gives him a nearly complete knowledge of every event, past and future, within his sensor range.

His sensory cluster is protected by a quartet of Gauss cannons that fire short bursts of armor-piercing, nuclear shells, delivering a system of EM shocks to stun any mechanical target they strike. His most formidable weapon in vehicle mode is a single probability torpedo, housed in a reinforced launching tube in his nosecone. In addition to a significant conventional detonation, this weapon disrupts causality in a loaclized area, yielding a variety of effects, all of which are inevitably disasterous for the target. Vector Prime rarely uses this weapon, as its effects always results is more work for him after the conclusion of battle.

In both modes, Vector Prime's armor is enhanced by several hundered microscopic dimensional vortices that capture and redirect part of the energy of every attack made against him to the heart of the larger of Cybertron's twin suns.
Weaknesses: Despite his unique perspective, he is nonetheless a linear thinker, locked into the concepts of cause and effect. As a result, he is not particularly imaginative, which limits his ability to use the vast amount of data available to him. Sufficently unpredicatble enemies have outwitted him.

Internal inhibitors prevent him from creating a paradox by appearing in two places at the same time. As a result, he is occasionally forced to expend a great deal of energy seeding himself throughout time, thereby giving the impression of omnipresence.

Finally, though he is a consummate swordsman, his reflexes are sometimes slowed by his internal data structure. When about to engage in combat, he prepare by shutting down a number of sub-processors, enhancing his thinking speed, but decreasing his significant intelligence and ability to predict the actions of his enemies.
[ Back To Top ]