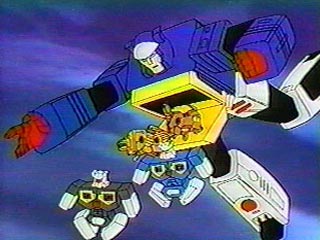 233 captions have been posted for this image so far ...

UnderYourCloset writes: Ahh my insides!!!
Rainmaker writes: REBELLION!
Black Hat writes: Argh, not again! I thought I fixed the lose hinge!
maroyasha writes: We are ready for launch! 3!2!1! Blast Off!!
trailbreaker writes: Eject - "I told you that Scotch tape wouldn't be enough to hold us in!"
Mad_Mexicoy writes: ....and stay out!!!!!
Flame Cheetor writes: Twincast:Get out of my circuits!
Death-Ray Charles writes: JUST MISSED THAT COOKIE CRISP!!!
Silver Wind writes: Their contract having expired, with negotiations going nowhere, the Cassettebots decided to go on strike.
DarkDranzer writes: Rewind: *sniff* WAAAH!! BLASTER'S BETTER!! I MISS HIM!! C'MON GUYS LET'S GO!!
Eject: *sob* YEAH!! AT LEAST HE DIDN'T GROUND US AFTER DRINKING 10 MEASLEY ENERGON CUBES!!
Twincast: Aww I'm not that bad guys!! Gimme another chance
- Back to top -
Roadshadow writes: Twincast: Crap! I forgot the damn seatbelts!
optimus9504 writes: OOPS: it was Twincast not Blaster but look like sorry..

Twincast: "ah, I am falling!"
optimus9504 writes: Blaster: "ahh, I am falling!.. others said what happen?"
Ultra Wheelshot writes: After this Twincast goes to see Ratchet
Twincast: Refit my door catch Ratchet
Eject oh damn he's not letting us out again
Rewind: You pushed me against the door
Ratchet: I must admit this is kind of funny
Rewind: It was Ramhotn who pushed us
Zeedust writes: Twincast, the Autobot clown car.
Masterpiece Prowl writes: Rewind: That's the LAST TIME we hang out with Blaster's little brother!
Eject:Steeljaw, Ramhorn, and I have the same feeling.
Twincast: Wait, I can be just as cool as Blaster.
Eject and Rewind(In usison): Rrrrriiiiigggghhhttttt.
Ratbat writes: Guys, let's show Soundwave that I'M as good as a commander as he is! ATTACK!!! :)
juggaloG writes: Gee, Takara! Thanks for the lousy repaint! I looked a LOT better in red & orange!
italianguy writes: wait, my fly is down.
Sir Optimus Prime writes: Yup, he's from an alternate future.
- Back to top -
President Optimus Prime writes: Twincast, a Cassettebot Guardian, possibly from some alternate future. I've got to find out about this guy.
Unknown writes: Twincast: Okay, if you kids aren't gonna behave yourselves, you can just WALK the rest of the way home!
Unknown writes: No... really, I AM Blaster! I just look like-- *trips* ...slag!
Pinster writes: A baby!...Twins!...Triplets!...quadruplets? Ok this is going beyond a joke
Pinster writes: I didn't realise what Optimus Prime did to me would make babies
PredaKing writes: Twincast: "How many times have I told Ratchet I need a locking mechanism!"
Shadow Fox writes: Twincast- Woah..that's not good, forgot to latch my chest piece..can you cassets fly..cause if not you guys are gonna become cyber-pancakes!!!
Unknown writes: "BLEEARGH! Whoo! That settles it! No more keggers for THIS 'bot!"
Unknown writes: (Twincast): "Damn! How did Soundwave actually keep them in cassette mode?"
Arkhaon writes: yahoo.....i believe i can fly!!!
at least i hope so
- Back to top -
Cliffjumper writes: This is what happens when you use rent-a-autobot.
Unknown writes: wopps...I'm gonna be in trouble...
Darkman writes: Wow just like 'ALIEN' but four times the alien and non of the mess!
Unknown writes: Doc: congratulations it's quadruplet cassets!