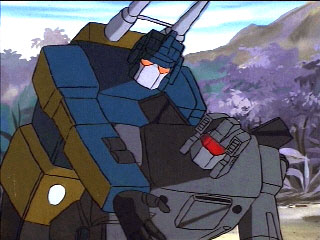 177 captions have been posted for this image so far ...

"NO!!!!!!!!!!!Ok."
buddhaquest writes: V- explain this battle plan to me again...
O- it's simple! We do this, you limp away, and I take a nap!
TheRo-Man writes: Vortex "This is all Hasbro's fault. I mean we wait 3 years for a female character, and all we get is Arcee and a Paradron Medic? Why couldn't I have been cast in GiJoe instead!"
TheRo-Man writes: Megatron: No you fools, thats not what I meant by saying "Your combiners".
Unknown writes: As Vortex bends over to pick up a quarter he realized what his cell mate said by
"The sex you want, You aint getting, and the Sex your gonna get, you dotn want"
- Back to top -
buddhaquest writes: V- Why? (grunt) do I have to always be the (grunt) Center and you're always the Quarterback? (grimmace)
buddhaquest writes: No seriously, this is how Hot Spot and Blades do it... really.
buddhaquest writes: Onslaught: Bark woman!
Vortex: Just pay me and go!
Unknown writes: O: You complete me. V: We form Bruticus.
Blackout writes: O: look vortex there an energon cube on the ground maybe you should pick it up. V: o.k. it seems to be stuck to the ground. hey wait, what are you doing.
Blackout writes: O: come on vortex give me some lovin
Blackout writes: looking on are the other decepticons in shock.