Decepticons after a party 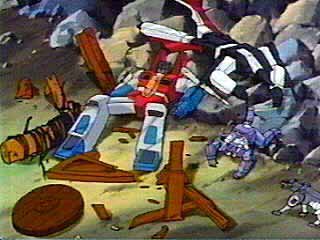 188 captions have been posted for this image so far ...

Road Turtle writes: Megatron (off screen), "You failed me for the last time Starscream!"

Megatron, "What did you say!?"
Road Turtle writes: Rumble, "...and this is why you're uncrasimatic!"

Starscream, "Shut up, or I'll have you unspooled!"
BG the Robit writes: Rumble: Ugh..*hand to head*Where-where are we?
Starscream: How should I-*hic!* Shit.
Ramjet: *blinks rapidly* Ulgh.. *gurgle* Ulp! Blleeeeaaaaahh!!
Ravage: *walks in* Aw, man, really! You hurled on me!
Nemesis Maximo writes: So THAT'S what gasoline does to a campfire...
Optimum Supreme writes: I heard they were bringing back Battlebots, but I didn't expect this!
ultraprime0914 writes: StarScream: Damn thats some party
Transformation619 writes: Rumble: get up guyzzzz!
Starscream: woah ...i*hiccup* want more beer??? *hiccup*
Ramjet: sure buddy!
Rumble: fine but let's make it quick!

Ramjet: "I got news for ya, boss... He's like that sober!"
Judynator writes: The TF Robinsons Family
DeltaSilver88 writes: After this Starscream, Ramjet and Rumble swore off keg parties for the rest of their lives...
- Back to top -
luevanoalx writes: RAMJET:UGH.....
STARSCREAM:WHAT HAPPENED????
RUMBLE:THOSE FEDERALES ARE NO JOKE.....
gauthic_angel7680 writes: rumble: man that was some massively awsome sh*t.
ramjet: hey here comes ravage. let's feed him some of this crack and see what happens.
starscream: yah that sounds like fun. here kitty, kitty.
azraelus writes: Starscream:Oh I am so slagged. No more energon whisky
Marv writes: Failed Energon Conservation Plan #122: Medieval Catapult-Assisted Launch (MCAL)...
Marv writes: The disastrous aftermath of Starscream's first attempt at model building...
Marv writes: On second thought guys...let's just fly to work as we usually do.
Marv writes: No, I said: "cut the RED wire!"
Zeedust writes: Ravage: "They're DEAD... I TOLD you we should have gievn them a canary before we sent them down here!"

2. The tag-team championship isn't going well for the Decepticons.

Rumble: "Because we always buy the beer?"