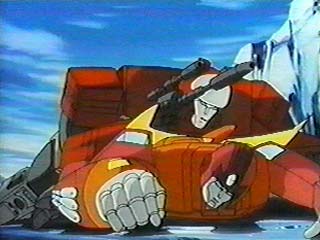 138 captions have been posted for this image so far ...

weebot17 writes: Blaster: Hehe... hey Hot Rod, let's see far the barrel of this gun can go.
MagnusLabel writes: (high pitch) Woooooooooooooo hooooooooooooooooooooooooooooooooo!
RatchetJazz writes: Haha looks like blaster showed him to much
Crashcomet writes: B: See? You can really feel the music this way!
HR: Music...riiiiiight...
Zeedust writes: You know, going through the UCC archives, it's amazing how many pictures are variants on this theme...
Roadshadow writes: Blaster: Uhh...yeee-ah, you like that, don't ya?
Hot Rod: WTF!? Get the ---- off me, you humping radio!
trailbreaker writes: Blaster - "Give me back my wallet !"
juggaloG writes: As soon as I scramble your brains...PERMANENTLY..with my electro-scrambler here, I'll be the rightful leader of the Autobots, which I deserve! I got ripped off in the Marvel comics, but I'll make the TV show have a VERY different ending!
MiGrAinE writes: Blaster: "Can I get a reach around?"
Zeedust writes: Hot Rod: "Wake me up when the sodomy jokes are over."

Blaster: Oh ermhm!..Sorry. I was just trying to..