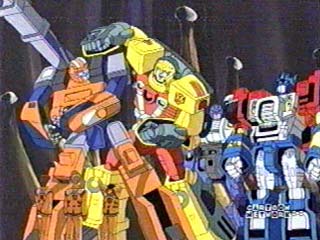 171 captions have been posted for this image so far ...

UnderYourCloset writes: Hot Shot: Smokescreen, have you ever wondered what a punch to the back of the head feels like?
Ramscreamer writes: hotshot:y'know you wanna see those 'secret' pictures of arcee i got from reflector!
arcee(off screen):ggggggrrrrrrr........
reflector:ulp...
Zeedust writes: If you look at this picture from the right and slightly below, you'll see what almost looks like Japanese katakana!

Smokescreen: f**k off Hot Shot, i need that money to pay Red Alert cause of his bet that Optimus would die and be reborn again.

Red Alert: What's really odd
Unknown writes: Leave him alone Hotshot.
AngelSailor-Cybertron writes: when the Autobots hang out with the human kids too long!
Unknown writes: [HotShot] Hi long arm you some beer bi*h [smokescreen]What did you say? you fool [hot shot] it all cool pal ^_*
Unknown writes: "No, you can't see my 'My Little Pony' set I got!"

"....No."
Unknown writes: Today on TF Armada: TRANSFORMERS! Not just humans anymore, Hot Shot throws Smokescreen a bachelor party but the Decepticons crash it before Fred gets to eat his cake, and he's PO'ed! You'll only find stories like this on TF Ar
Shadowcon writes: Smokescreen:You're still not getting my beer Hotshot!
Hotshot: but I NEED it!
Unknown writes: geez hot shot you need to lay off the wiskey
Zu Darkness writes: Hot Shot: I remember the day you used to be this funky Race car smokescreen.

Smokescreen: Yeah I know you lousy drunk... get your arm off me i have work to do.

Optiums Prime: Remeber Smokescreen your suppose to kill the ones who made and drew us li
Bruticus writes: How ya doin', buddy? Us Transformers with crappy arms gotta stick together!
- Back to top -
Unknown writes: Smokescreen: Don't you dare take my twinkie!
Unknown writes: You know IM only 12, but I like this on the same way as the others...;-)
Unknown writes: Hey, didn't we saw this on my school? Same Technique, same MISTAKE
zach writes: please dont get me mad im running outa places to hide the bodies
Unknown writes: nice shot! can u teach me that?
Unknown writes: HotShot: Man Smokie your are Da MAN!!
Optimus: I like pancakes
Beast Simpson writes: Touch me and I rip out your spark.
Unknown writes: SMOKESCREEN: Don't touch me, don't ever touch me!
little_fly writes: smokescrean: hey hot shot: hot shot yes? sc: i have a slight tummy ache: hs awwwwww sorry to hear that ;)
PlasmaRadio writes: Hot Shot: "Do you wanna see my mini-con."
- Back to top -
Smoke Screen writes: did you put dioderont today because you stink.
joshua writes: hey smokescreen you wanna make me leak oil(com)
Unknown writes: Prime: "get me some oil...NOW!!!"
Chrono writes: not in front of the others hotshot...they won't understand..
Unknown writes: Come on Smokey I NEED it man! I need it BAD man. I'll let you play with jolt man. justa puff somkey justa PUFF man. I'll pass this time I promiss mann I'll pass the puff man smoke it smokey Man
MindWipe writes: lets play ball toooooot!!! (whistle noise)
Broadside writes: No come on it's good for both of us.
Josh writes: eww get away optimus !! hes gonna give me the hands on demonstration
Unknown writes: Hotshot: give me the ball Smokescreen!