Optimus laying down on the ground 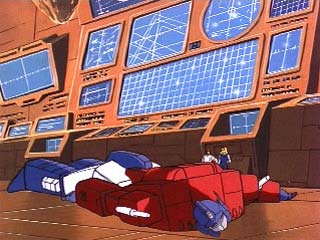 330 captions have been posted for this image so far ...

Rainmaker writes: Optimus: I CAN FEEL IT IN THE GROUND
Ratchet: You need help
BG the Robit writes: OP: Ratchet.. I don't feel good.. *crash* *hurls*
Ratchet: I told you not to go to human bars, your systems can't take it.
BG the Robit writes: Spike: Optimus, you look tired. You should rest.
OP: Evil never rests, so why should I... *crash*
Carly: Because you just collapsed from exhaustion.
trailbreaker writes: That was a big fart....
Crashcomet writes: Spike: Carly! You killed Optimus! GTFO!
darkqueen01 writes: Don't feel bad, Optimus. After a night of drinking I don't always make it to bed either.
Condan1993 writes: spike and carly: you fell over... you fell over... you fell over...
Angelbot writes: Carly: I know he misses Elita One but I didn't think his loneliness was this bad!
Zeedust writes: Deleted from Optimus Prime's TFU profile...

Prime:*Sniffs* Look at this picture, I'm going to be a metal monkey in 300 years!
Not Sonic writes: hey, i found a nickel!
Starbeam writes: Optimus: "I am Optimist Prime. I voted for Kerry, believing in the good in humans. Since they have proven me wrong, I have lost my will to liveâ€¦"

Megatron: "My plan is working! Soon all the Ear
gauthic_angel7680 writes: carly: i can't believe he wants me to crawl up in there and tell him what i see.
spike: oh come on baby, i thought you like that kinky sh*t.
carly: look, just because i let him have me doesn't mean i will crawl up his ass.
Ataraxia writes: Carly for the last time, i told you he can't handle Vodka!
- Back to top -
Screambug writes: Optimus Prime is so suprised by the "household pests" running around his house that he simply passed out.
Kit writes: ah **** i took too much
Masterpiece Prowl writes: Spike: Oops, I forgot to mention that Hoist waxed the floor.
Prime: This is almost as bad as the time I slipped on a bannana peel.
Spike: Who knew that Wreck-Gar was the one behind it?
galvanostril writes: spike: man, prime should not think to hard about crappy parody series like RiD and Energon (lets face it people, it degraded since BEAST WARS started!)
Tiedye writes: After four million years in stais lock, it can reak havoc on a Cybertrion's back.( Optimus)- OOOOhhhhh my back!!!!!!!!!!
Tiedye writes: Spike-"Hey Optimus LOOK OUT! I just mopped the floor!(Optimus falls on the floor)"See told ya!" (Magnus comes in)."Hey Magnus the floor is wet, LOOK OUT!" (Magnus slips on floor). "I said it was wet." (Arcee comes in)&qu
Magnus writes: AAAAUUUUGGGGHHHHH! CRAMP!
Castle74 writes: SPIKE TO CARLY: Yep, he's drunk again!
Tiedye writes: SPIKE- I told Optimus that he spends too much time working. I told him he has to rest for a while, but nooooooo he comes off saying something like... " I will never rest until evil is undone"... and the he just passed out.
x writes: prime missed his target' and fell on the ground.
the target? the humans
- Back to top -
Dark Nemesis Prime writes: Optimus saw the future and past out when he saw hisself in a gorilla suite.
Unknown writes: Teletron 1: "Test simulation competed! Grogg-blaster is fully Operational!" Optimus: "Shgbllllleeee!"
Unknown writes: ...the result of too many late nights competing in energon drinking contests...
Shadow Fox writes: Cop- Ya, he was doa when I got here, a witness said there was some screaming, then a pulse laser rifle was fired then followed by a loud clank-boom thing..ya it's always a waste to see them die so young.
Unknown writes: Spike: "Told you your shoelaces were untied, but nooo... Prime ALWAYS has to know best. Robots don't HAVE shoelaces, you said. Maybe you'll start listening to me now?"
Unknown writes: Prime:Too...much...booze...
Cain writes: Is he dead? * Carly pokes Optimus with a stick Yup, he's dead...
gir writes: cheap autobots they make these days...
Unknown writes: Spike: And If you bug Carly again, there's more where that came from!
gir writes: spike to carly: "I told you to buy energizer!"
- Back to top -
Dark Cyclone writes: *BUUUURp* What'd I do last night! Ow Hangover!
Unknown writes: SPIKE:(to Carly)See when I press this button Optimus does this.
X-Brawn writes: DAMM! Why didn't I install those stupid airbags?!!
Unknown writes: Spike: Poor Optimus...
Carly: Wonna burn him?
Spike: I'll get some matches.
omega icecream writes: slacking off the job huh optimus prime?well WAKE UP!
BlItZeR writes: Robot getting hit in the groin by a football.
*doing* *urrghhh* "me groin!"
Unknown writes: spike:uh... carly i would run if i were you. prime is having another sex dream.
Mirage writes: damn it spike i'm not a cheap a$$. now to get my nickel back from under teletran 1.
Jetfire Masta writes: Gawd i dropped my damn cherrio no wonder those people on the commerciels like them so much damn my head well ill do anything for them even if it means crushing spike and carly!
Zeedust writes: Spike: "Don't mind Optimus. He was up all night playing Heavy Metal War." (Shameless butt-kissing plug? Check!)
- Back to top -
Zeedust writes: "So this is the great Optimus Prime... Funny, I'd always expected him to be a bit taller..."
ultramegatron writes: spike: PIME have you been sneeking raw energon again your turning into an energonaholic
parkwood writes: -Spike to friend- So this is the great Optimus! I know he dosent look like much right now but I dont know anyone who would after the amount of lix he drank wow!
Alphatron2k3 writes: G1 Prime just saw the Armada Preview.
jonboy writes: And here we see the wild Optimus Primacus of the autobot species. Oy, I want to get a little closah and bag a tag on the giant bugga, but im too scared. If you can notice, the red color on his upper torso probably signifies that he is the alpha wolf of th
K-nonFodder writes: Prime" thought you said that i would get a better feel for the enemy if i tried to think like him" Spike " well i guess dusting isn't exactly a battle"
Unknown writes: {SPIKE}Man...optimus had a little to much fun last night!
Zio Matrix writes: Optimus Prime got hammered partying all nigth again...
Linkortron writes: Prime: "Ok, who's the wisenhiemer that tied my shoe-laces together?"
Unknown writes: Carly:"Oh my god! They killed Prime!" Spike:"You bastards!"
- Back to top -
Unknown writes: Carly:"Is prime dead?" Spike"Again? That's the 5th time this month!"
TetraReris writes: Carly and Spike *trying hard not to laugh*
Prime: Ooooo. Ow. I got to talk to Grapple about that uneven spot on the floor.
Unknown writes: Ah ----! I've lost all feeling in my legs. Stupid ass Megatron just had to put those jumper cables on my knees.
Unknown writes: Where are those p**sing Micromasters when I want one?
thexfile writes: teletran 1 : and that were today's winning lotery numbers ....

Spike: "Carly, you get the floor buffer; I'll get the sandblaster."
raijinald writes: Prime accidently stumbles at the couples'newborn son, Daniel.