Meanwhile, back on Cybertron ... 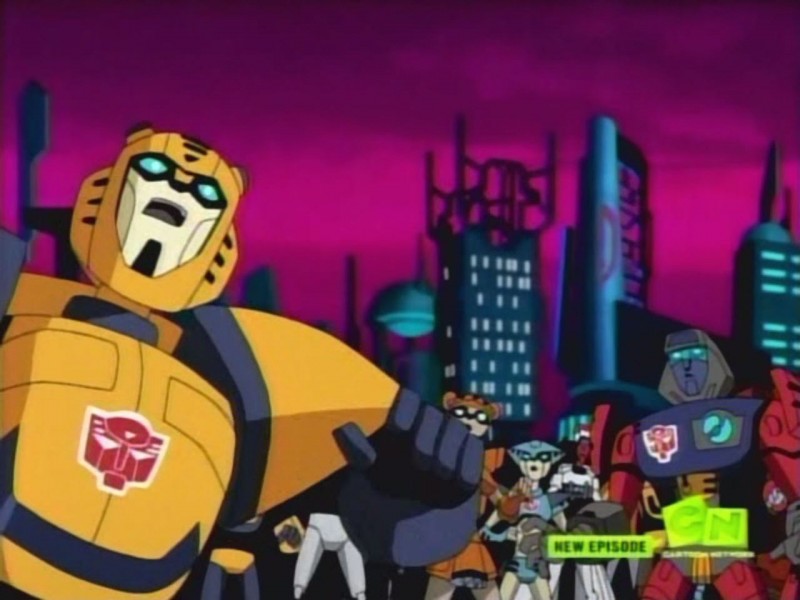 DeltaSilver88 writes: Yellow: Uh, why is Optimus climbing the Iacon Tower and making monkey noises?
Background: Movie night. Watched King Kong, plus he's drunk as a cyberfish.
ThunderThruster writes: Bumper: "No! I'm the real Bumblebee"
Mainframe: "On 3 grab him, then sedate him."
Decepticon Stryker writes: They just found out they're not getting a Season 4.
ksol71339 writes: BUMBLEBEE:. " LORD OPTIMUS, It appears that STARSCREAM had RESSERECTED from the DEAD! "

THE PURPLE AUTOBOT:. " OH S--T, HERE'S GOES THE PLANET! "
TheBritishFan writes: Wait, combiners are in Animated too now?
BG the Robit writes: Bumblebee: We... just walked in... on Optimus having sex.
*the others nod*
Optimus: Oh, hey guys!
Optimum Supreme writes: Cybertronians react to Michael Bay's Transformers movies.
Victinoko writes: Dull surprise
Miester-Jazz writes: "It's a bird! It's a plane!"
trailbreaker writes: "Hey look, Megatron's wearing a thong!"
- Back to top -
Cmdr. Trailblazer writes: Guys, look! A textbook example of dull surprise!
Victinoko writes: Oh look! It's Micheal bay!!
Acceleracers7 writes: "I don't believe it! Spike finally managed to climb up the ladder!"
snavej writes: Bumblebee: Anyone who calls us nonentities will be mercilessly pummelled with my HANDBAG!
snavej writes: They wanna make another 12 MOVIES???!!! Let's get outta here! The Pegasus Galaxy is a good place to hide.
snavej writes: You know, we really need better architects. Look at all the weird skyscrapers around here!
snavej writes: Ged doo da choppa!
snavej writes: I'll have what she's having!
snavej writes: Someone called Bumblebee 'the Yellow Peril'. This was the reaction.
snavej writes: You mean to say they've been making a children's TV show about us all this time? Bring me Lawyertron 7000, quickly!
- Back to top -
snavej writes: The too-much-mascara plague was spreading.
snavej writes: We're on the Jumbotron! Everyone panic!
snavej writes: Whaaaat???!!! FIFA is corrupt???!!!
snavej writes: Nice beaver!
Road Turtle writes: Look! Up in the sky! It's a bird! It's a plane! It's-It's...UNICRON!!!
snavej writes: Possibly Bumblebee: There's another caption competition picture up ahead and it looks better than this one.
Possibly Mainframe: Damn, WTF Sari, clean that finger or we'll have to destroy it!
snavej writes: The city was under unexpected attack by Metroplex's giant boner. No one had made a plan for this contingency.
snavej writes: What do you mean 'There's no such thing as energon ice cream'? We're overheated and cranky. We might start throwing stuff at your van, dude! No, we don't want any frozen 'urine' either!
snavej writes: No one knew who they were, so they were all horribly killed by a gigantic rampaging hatstand.
trailbreaker writes: My God it's full of stars!
- Back to top -
bumblebeej8 writes: Its Michael Bay! RUN FOR YOUR FREAKIN LIVES!
Towline writes: OH MY PRIMUS! The combiners are back! Drive for your lives!
Bonerking writes: Kaiju!?! Book it gang!
welcometothedarksyde writes: BRAINSS!!!!
KirbyForce1 writes: Orange fella: "A new caption contest finally? What took you so long?"

Guy who looks like Gears though may not actually be Gears: "I dunno, but I REALLY wish this site would stop logging me out even though I always click 'log me in automatically on ever
Emerje writes: Arblus, look! It's Unicro-no, wait, it's just a new caption.
Black Hat writes: The Autobots look on in shock as the caption contest pic is finally changed.
MasterSoundBlaster writes: Dull Surprise claims 5 more victims
robotmel writes: "What do you mean 'Flash Gordon approaching'?"
dragons writes: run its trypticon!!!!!!!
- Back to top -
OptimalOptimus2 writes: My name is Mainframe. Behind me are my wives. The guy in front is a wannabe gigolo.
Wheeljack808 writes: Is that a HELICOPTER as Superion's Arm?
Alpha Dominus writes: Wait. Did they finally change the art for the caption contest?
killionare357 writes: Oh my god! New repaints for Slingshot and Wildrider? Why no new molds!?
MarkNL writes: Back our reporter on Cybertron: "Yes, it's quite a chaos here. There have been riots all over Cybertron because there were no caption contest pictures anymore."
Super Megatron writes: So...we're Actionmasters now?
CombaticonsCombine? writes: Furão: Why do I feel like I'm in a Dreamwave Comic?
Tranzilla writes: IT'S A BIRD!!! IT'S A PLANE!!! *SPLOOSH* Ewwww...it was SkyLynx.
Shuttershock writes: It's a fair to partly purple day in Iacon, Chip. More news as the weather breaks.
Ravage XK writes: No, no I don't like this. Put the old picture back please. The site seems wrong with out Prime and that ladder.
- Back to top -
william-james88 writes: GODZILLA!!!!!!!!!!!!!!!!!!!
Madeus Prime writes: 0.0 Could it be? YES! IT IS!
Clerihan writes: You wanna see my ladies transform, you talk to me first
Nemesis Maximo writes: Look! Over there! Can it be? An actual new Caption Contest?
WF72 writes: They finally updated the caption contest?!?!
lonrac writes: ....so about that final wave store exclusive??????
lonrac writes: ......Um.....ah.........line?
levinx writes: "Are... Are we on the Ultimate Caption Contest?!"

Spell checked.
levinx writes: "Are... Are we on the Ultimate Caption Concest?!"
Bumblevivisector writes: 3 FEMBOTS IN BACKGROUND: "NO, we are NOT doing a strip show to give your animators 'inspiration' for BlackArachnia's CG model!"

MAINFRAME: "No, I'm not THAT Mainframe..."
- Back to top -
Beyonder writes: The Autobots are SHOCKED that Seibertron actually slagging CHANGED the caption pic!!! Impossible!!!! I want my Spike-climbing-up-the ladder back!!!
Bumblevivisector writes: "They changed the pic for the first time in over a solar cycle?!?!?! What the..."
- Back to top -