Mount Rushmore gets a facelift 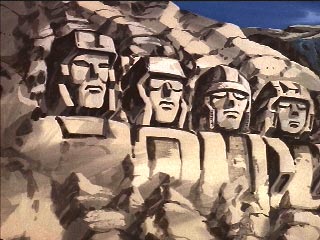 57 captions have been posted for this image so far ...

Optimustard writes: Proof that Botox has been around since before time began
. Blitzwing: I am smiling, we are all smiling!!
Victinoko writes: Wow history was very wrong about the presidents
o.supreme writes: The Transformers version of The Source Wall left much to be desired
-Kanrabat- writes: Duuuuude... Too much green energon... We are so.... stoned!
ALICIA3441 writes: DAMN
bumblebeej8 writes: Mirage: Hey look, we're famous!
Rainmaker writes: The day Megatron, Blitzwing, Astrotrain and Starscream came face to face with an Autobot Medusa.
Skyspeed writes: Failing taking over the entire universe, the Decepticons settled for Konoha instead.
TF Cagle writes: I can't tell who they are, they all look alike!

(Yes I'm G1 rascist.)
nyklas78 writes: OH MY GOD! Its Obama,Clinton,Kerry....and Oprah!. They have taken over the world!
- Back to top -
Bluespindash97 writes: The worlds lamest combiner, ever.
Frenchhorngirl writes: Oops typo than not then
Frenchhorngirl writes: BLITZWING:"We are way more beautiful then Candace ever was!"
Mjochmann64 writes: Wish we never met that medusa chick!!!
omegasupreme69 writes: In your face Mount Rushmore...
Towline writes: Richard Hoagland is right! There are faces on Mars!
kruiz220898 writes: "Dear Mister Presidents, won't you take drive or fly with me"
MarkNL writes: In an alternative reality...
Black Hat writes: The Decepticons soon regretted letting Pat Lee sculpt their faces on the mountainside.
JeffreyVeregge writes: Goodnight, sweetheart, well it's time to go,
Goodnight, sweetheart, well it's time to go,
I hate to leave you, but I really must say,
Goodnight, sweetheart, goodnight.
- Back to top -
SaTaN CoNvOy writes: wanna get stoned?
#Sideways# writes: Dry scalp even affects Transformers now.
#Sideways# writes: That's huge, but nothing compared to snavej's post count on this thing!
Maestro Meister writes: Judging from his tramp stamp tattoo, we can safely assume Transformers Prime Unicron is a Geewunner.
Tranzilla writes: Finally a Megatron that Optimus agreed was made of sterner stuff.
Tranzilla writes: The Decepticons took Queen's "We Will Rock You" a little too literal...
snavej writes: This was actually a memorial to those fantastic times when the Decepticons would sit on the couch and watch 'Leave it to Beaver' reruns.
snavej writes: Despite the best efforts of the Decepticon master sculptors, the Turner Prize for Art went to some overconfident, cocaine-addicted, self-promoting t**t from Hoxton, London, UK.
snavej writes: Saddam Hussein's rebuilding of Babylon had gone horribly awry.
snavej writes: Somehow, their colour-changing abilities did not conceal them this time.
- Back to top -
snavej writes: The Decepticons were finally rendered armless. And legless.
snavej writes: This impressive monument was later blown up by the South Dakota Taliban.
snavej writes: The real reason for Decepticon misfortune: the massive diversion of resources to vanity projects.
snavej writes: More effective than scrawling your nickname all over the city with car spray paint.
snavej writes: More than meets the eye: there was a visitor centre and cafe just under Astrotrain's left nipple.
snavej writes: Robots in disguise: as big-ass statues.
snavej writes: After this, they turned to deal with the real threat: the retail park just off the freeway.
snavej writes: They were originally going to be on horseback but then Optimus's shenanigens delayed the project for many years.
snavej writes: Desparate to escape their enslavement to Nintendo, the Decepticons undertook large-scale diversionary activities.
snavej writes: Starscream really wanted that double mastectomy now.
- Back to top -
snavej writes: 'Look upon my works, ye mighty, and despair.'

The Decepticons are reduced to rock carving on an obscure mudball planet.
snavej writes: This way, they were wiser and cleverer.
snavej writes: Never f**k with Medusa.
snavej writes: We didn't do it. They were like that when we got here!
snavej writes: Is it some sort of statement from Banksy?!
snavej writes: And you thought that the injuns were p****d off with the faces of the dead presidents on their sacred mountain! [Actually 'native Americans'.]
Xephon0930 writes: Up your's Zod!!!!
Maestro Meister writes: The Rocklord combiner never really took off.
welcometothedarksyde writes: Well that escalated quickly
Mindmaster writes: "I pledge alleigance, to Megatron, of the Decepticon States of Kaon..."
- Back to top -
prowl123 writes: George Washington. Just that awesome.
paul053 writes: Starscream: You know, I've seen a picture on Google showing what the original human presidents looked like from the back of these rocks. I wonder what we look like ...........
alekesam writes: Megatron:"...and I told Laserbeak to sculpt us as true to life as possible. That is why they all look miserable except me."
SKYWARPED_128 writes: What happens when Geewunners take over the world.
Alex Jones writes: Tyranny in America
Poyguimogul writes: Optimus Prime : "Someday I'll be hokage! Believe it!!"
welcometothedarksyde writes: And that children is how Ponyville was named
- Back to top -