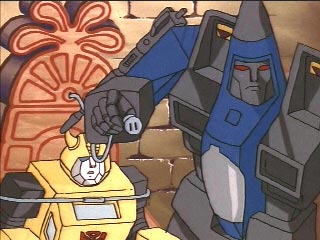 trailbreaker writes: Plug the vacuum in here!
Towline writes: "Sigh" The things we do to protect the fragile environment of the Earth.
Jetfire22 writes: Confirmation that in the next installment of Transformers, Michael Bay is changing Bumblebee's alt mode to the all electric Nissan Leaf.
BG the Robit writes: Dirge: This plug will make him think he's my boy...
*Everyone stares*
Dirge: *steps back* What? I can be gay!
BG the Robit writes: Me: Bee, since when were you electric? I saw your Energon last night when we made out...
Optimus: *walks in* You did what now?
-Kanrabat- writes: Dirge: "Ho... herr..... It's not what you think!"

Bee: "Sigh... You forgot to lock the door. Again."
Rainmaker writes: Dirge: ...and this, Thrust, is how to get honey from a Bumblebee.
william-james88 writes: Where is Liam Neeson's daughter!!!!!!!
trailbreaker writes: This new electric toilet is hard to figure out.
Riptidemtmte writes: "Let's see, where are they... Oh, THERE you are, viewer! Hold still while I plug this into your skull, 'kay?"
- Back to top -
TF Cagle writes: Dirge: Okay Bumblebee let's go, my Iphone needs charged.
jpmonge1984 writes: I need a cup of coffee!, where's the coffee maker Bumblebee?
omegasupreme69 writes: ok ok Ill talk I will talk just no more Justin beiber....
kruiz220898 writes: Plugged what into Bumblebee, I'm afraid to ask
Black Hat writes: Bumblebee reminded himself to stay out of Dirge's bondage dungeon in future.
YRQRM0 writes: I pulled the plug on the original thinking it would stop Hasbro from making new Bumblebees. Never have I been so wrong.
snavej writes: Denied access to The Daily Squee by a diabolical Autobot cybervirus, the Decepticons became much more sadistic than usual.
snavej writes: Dirge: I'm doing you a favour. On this world, yellow is the colour of urine!

Bumblebee: But your wings...

Dirge: Will be resprayed tomorrow, you dopey-looking midget.
snavej writes: Dirge: Consider yourself lucky. How many other people die in an electric penis chair? You'll be the talk of Autobase!
bigricky30 writes: This one goes in your bum gasketand this one goes in your vocal processor...Uh...wait a second.....no...Its this one that goes in your bum gasket and the other one goes in your vocal processor....
- Back to top -
Blahzaye writes: "I'm pretty sure that thing's a citrus juicer dumbass!!!"
VioMeTriX writes: damn european outlets, this plug wont fit!!!
Hectotane writes: Dirge: I shall now do all of those, who are sick of seeing your numerous toys, a favor; Bumblebee. Death by electrical plug.
tandrie88 writes: Megatron sir, we are all out of energon maybe I can plug into Bumblebee spark to heat up your morning coffee.
alekesam writes: "Get the gimp."
trailbreaker writes: Dirge -- "Shut the door, there's nothing to see here!"

Bumblebee -- "Put your pants on!"
VioMeTriX writes: Ummm dirge, you cant plug that in here...its an american plug and a european outlet
munkimus prime writes: Bumblebee did not fare well against the Brain Plug. Who is strong enough to face the most powerful force in the universe, The Brain Plug. Find out in the next exciting chapter of the Ultimate Caption Compitition.
MarkNL writes: Electrical chair before it was cool.
SideswipeSunstreaker writes: tough to explain to Megatron.
- Back to top -
SideswipeSunstreaker writes: Dirge: Now that I've converted Bumblebee into an eclectric beetle, I just need to plug him in to charge.
Bumblebee: Yeah, but you gave me a female plug by mistake.
Dirge: Mistake? You mean you were...? And you weren't a....? Uh oh, this is gonna be tou
#Sideways# writes: Bumblebee, what's is snavej's post level on this picture alone!?

IT'S OVER NINE THOUSAAAAANNNDDDDD
snavej writes: Dirge was mocked for being a conehead, so he became very cruel and sadistic. He tortured Cliffjumper so much that he started to look like Bumblebee.
Twitchythe3rd writes: Dirge prepares the ritual sacrifice to the Toy-Making Gods.
Fett13 writes: Bumblebee: IACON, IACON!!!

Dirge ignores Bumblebee's cries of the safe word that was previously agreed upon.
Big Kielbasa writes: Umm....where do I plug this in??
ryanisawesome124 writes: just let me...SHUT UP BUMBLEBEE let me plug this in so i can kill you
Zeedust writes: Back on Cybertron, extenension cords were often used for light bondage.
wait for it writes: Oh yeah bumblebee? You just laugh. As soon as i find a place to plug this toaster in i will have toast and it will be delicious!
Cybertronian writes: Dirge's interrogation looked promising until he saw that Bumblebee was recently upgraded with USB outlets.
- Back to top -
dedcat writes: Cybertronian toilets seem unnecessarily complicated to me.
snavej writes: Bumblebee: Can't you do that wirelessly these days?

Dirge: Possibly, but I'm SO stuck in my ways. [Connects]

Dirge: At last, the secret formula for Reese's Pieces is mine!
snavej writes: Bumblebee: Did you know that your jet mode is obsolete now?

Dirge: I TRIED to get it changed but NO ONE will give me a $10M LOAN!
snavej writes: When the cable was connected, some South American housewives came and hung washing on it.
snavej writes: Dirge's work as a roadie for 'The Autobots' became progressively weirder.
snavej writes: It was another case of 'Why bother with electrocution when your gun is pointing directly at the defenceless enemy'.
snavej writes: Spurting pornographic image discovered in Transformers cartoon.
snavej writes: The chair failed to work because the terrified Bumblebee lubricated the seat.
snavej writes: Dirge: If this electric chair works, I can sell it for $10,000 in some dictatorship or junk shop.

Bumblebee: I want my cut!

Dirge: Oh, you'll get cut very soon.
snavej writes: Cybertronian technology has always used standard US two-pin plugs. That bit of forward planning was very useful on Earth.
- Back to top -
snavej writes: Bumblebee was mesmerised by Dirge's perfect rectangular bosoms.
snavej writes: Dirge: KKK? Never heard of them.
morphobots writes: Dirge: "The things I gotta do to watch Netflix."
paul053 writes: Hasbro won't kill me by doing this right? I know no body likes Bumblebee.
#Sideways# writes: Wait... If that is a female end of a plug... That means that there is a male end somewhere on Bumblebee's body...

By Primus...
Bumblevivisector writes: DIRGE: "Dammit, someone else must remember that lost clip of me tackling Optimus just before he fought Megatron in TFTM, and I'm gonna' probe the memory of every Autobot until I can prove it!"

BEE: "Not a clip showing how you survived getting eaten?"
Ravage XK writes: Lord Megatron, this connection has no Earth!
Road Turtle writes: Dirge, "Back! or I'll plug you in!"
Heckfire writes: "...wait...there's an ELECTRICAL CORD in an INCAN TEMPLE?! They WERE more advanced than we thought!"
"Oh, yeah? Then why is it a female socket?"
"..."
"Really advanced there."
"...shut up, Autobot scum."
spartanH85 writes: Dirge: Megatron this connector wont work! Megatron: dont give me that garbarge make it work...Dirge: i need a male connector! And I will not install one on bumblebee...but at least we know now why he...excuse me she has pink interior
- Back to top -
Zonniwoop writes: ...Never an extension-cord around when you really need one...
BeastProwl writes: All right Hasbro, you've gone and done it! I'm unplugging the Bumblebee Press! DEATH BE TO THE YELLOW SWARM!
- Back to top -