Optimus having a bad day! 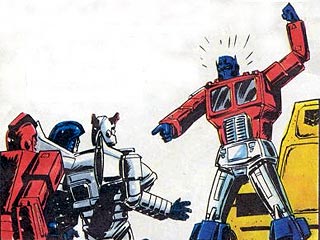 261 captions have been posted for this image so far ...

Bennington1234 writes: Prime:Who wrote my IDW comic incarnation! Find him and bring me his head!
BG the Robit writes: Me: What the frag is wrong with you Prime?
OP: RAAAAAAAAAAAAGGGGGGGGGHHHHHHH!
Me: Okay, thanks for clearing that up.
BG the Robit writes: I TOLD YOU DESTROY THE ZOOBLES, THEN THE DECEPTICONS!!! ALWAYS KILL THE F*****G BABY TOY IMPOSTERS BEFORE THE ONE BENT ON DESTROYING THE WORLD!!!!!!! B**********************TCH!
DeathReviews writes: "Pull my finger! Pull it! Pull it, I say!!!"
shockwave_inoz writes: "That last movie was RIDICULOUS!! Bring Michael Bay to me... NOW"!!!
XDMan writes: OP: I had enough of seeing fans sad because of the live action films! I will not want to see flames on that Pimpimus Prime! And I would not let Takara get headaches because of that so called "realism"! We'll show Bay who's boss for calling F!SRL childish!
peacethroughtyranny writes: (Prime after overenergising)THAT'S IT!! ALL YOU BOTS DO IS SIT AROUND WHILE I FIGHT ALL THE.. ALL THE MUTHERFRAGIN CONS!! YOU GUYS ARE GONA LAUNCH A FULL SCALE ASSAULT ON THEM OR I'LL.. I'LL HAVE ALL YOUR HEADS
Black Hat writes: Who put my mouthplate in the wash with my leg armour again?
Rex Prime writes: Optimus: DO THAT...DO THIS...DESTROY THE WORLD...I WANT THE MAXIXIANS DID, WHERE IS OPTIMUS PRIMAL. ZEEP ZEEP ZEEP, I HAVE BEEN REMADE....KILL THAT BIRD IT'S EVIL!....WHERE MY GLASSES....TWILIGHT SPARKLE WILL PAY FOR HER CRIMES....ZEEP ZOOOP...MY WORLD WI
#Sideways# writes: "What's wrong with Prime?"
"DAGNABBBIT, SLAGGINATORTRONS, COMEFLABBIT, I TOLD YOU TO GO AND GET ME AN ICE CREAM CONE!!!"
- Back to top -
Deceptifemme84 writes: Optimus! "I know you took it! Give my trailer back NOW!!"
darth_paul writes: Prime: Autobots! Pull my finger or feel my wrath!
Mirage: I think that were going to feel his wrath no matter what choice we make.
Prowl: Yeah he's always like this after too much energon chili.
darth_paul writes: Ironhide: Guys are you sure we brought back the real Prime, or is this still that clone Megatron made of him?
Mirage: I'm not asking him, Prowl?
Prowl: As tactical officer I suggest we make a hasty retreat.
Lee the Arrogant Bastard writes: Optimus Prime: I want you find the wise guy who drew this pathetic excuse for a drawing, so I can see to him personally!!!
gogleman374 writes: Prime: Prowl MIRAGE And Ironhide! What Did I say about cookies Before dinner??!!
Scatterlung writes: Prime: I pick YOU, Ironhide, to join me in the new movie! You other losers get out.
Mad_Mexicoy writes: Don't make me take off my belt!!
Brooke writes: Prime: Which one of you stashed crack in my trailer last night?! I got pulled over by the Earth police for pedaling drugs! Prowl, was it you????! !!!!!
Prowl: No I swear!
Prime: That is SUCH a lie! I saw you smoking crack with Starscream last night!
Pr
Brooke writes: Never ever EVER mess with OP before he's had his cofee.
OP:Mother F@#$%^&! Whish one of you ate my F@#$%^& donut?
Prowl:(Burps)
OP: Prowl you B@#$%^&!
Phasewing writes: ALL YOUR BASE ARE BELONG TO ME! >:D
- Back to top -
shockwave_inoz writes: PRIME: "For the very last time - I AM NOT WEARING FLARES!! They're just - uh, big boots! OKAY??!! And anyway, YOU lot should talk! HA!!"
Other Autobots: "Okaaay..."
PROWL(muttering under his breath) "Stupid Bell-Bottoms.&qu
tian17 writes: Prime: look all of you, you think i can get on cybertonian idol?

Ya had a bad day, takin one down, sing a sad song just a-turnin around, ya say ya dont know...

Prowl: Optimus, you sound like mariah carey, and thats not a good thing

Prime: I prefe
ethanx18 writes: o no its micheal bay
Superion_007 writes: LEGGO MY EGO WAFFLES!!
Mad_Mexicoy writes: WHAT DID I TELL YOU ABOUT PLAYING WITH THE TV REMOTE!?!?
Flame Cheetor writes: Prowl:Is prime being possessed by Starscream's ghost?
Mirage:I think he accidently ate a babbling insect...
Ironhide:He must have drank to much beer last night!
Prime:$%#$blahblahblah.....
Ironhide:Prime, how many bottles of beer did you drank la
snavej writes: Now, I want you to watch while I reach up here and pull the chain, thus allowing the waste fuel to be flushed into the holding tanks. Good grief, I thought you'd all be toilet trained by now!
snavej writes: Optimus: Hah, you didn't escape - Geoff Senior drew you too!

...And they now knew the horrible secret of the Phantom of the Optimus.
Marv writes: My new Energon figure does NOT look fat!!!! It's just big boned!
Marv writes: Fine! If you think the new Energon Megatron's that great, you can go and join the Decepticons for all I care!!
Marv writes: So, finally I meet the ringleader behind this little circus!!!
juggaloG writes: Op: How dare Takara/Hasbro turn me into a King Kong Bundy-sided fatso! They'll pay for this!
Prowl: Calm down, man! At least you're in Energon, along with us!
Ironhide: Easy for you to say! They turned me into an annoying young whippersnapper!
Masterpiece Prowl writes: Prime before his morning coffee.
- Back to top -
Kal-Seth writes: Prime: YOU yes YOU Prowl find out why we are so F**CKING DRAWN BADLY!

few people knew that prime through a horrible mishap during his programming suffered autobot PMS
Demona writes: *invader zim voice* i shall rule you all with an iron fist! YOU!!!! OBEY the fist!!
Zeedust writes: Optimus: "Shut up! The three of you are gonna die in the movie too!"

Prowl: "No more comic books. Ever. Please?"
Castle74 writes: Yep, the Autobots do so enjoy Optimus doing his Howard Dean impression!
Castle74 writes: Why the Autobots joined the union!
Tiedye writes: OPTIMUS- "How do YOU like my Ceasar impression.
Unknown writes: Convoy:Wake up your boldy idia! or I will rip open your ----ing brians you ----ers.
Autobot:Yes Boss! ahhahhhhahhhah
Hot Rodimus writes: OP-WACHUGONA DO BROTHA WHEN THESE DICAST PYTHONS GO WILD ON YOU!