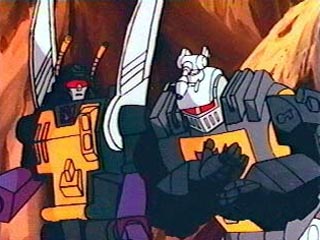 120 captions have been posted for this image so far ...

Bombshell: (barf all over the floor) g..g..go get Soundwave

Kickback: what happen
Bombshell: GO GET SOUNDWAVE NOW!!
Black Hat writes: I can't believe it...My best toy is a 3rd party product...
- Back to top -
BeastProwl writes: Bombshell: AHAA! AHA! HE JUST...RAN OUT THERE!
Kickback: Were's Shrapnel?
Shrapnel: Rout 66 huh? Wonder why they call it tha-
#Sideways# writes: "If I puke in this helmet..."
darth_paul writes: Kickback: What's up Bombshell?
Bombshell: I read somewhere that Coca Cola can dissolve the head off a nail and I didn't believe it so I drank some and now it's dissolving my inisides! ARRRAGGGHH!
hot rod 907 writes: WHERE THE HELL IS THE PEPTO BISMAL!?!
Dclone Soundwave writes: Kickback:"What's wrong with you?"

Bombshell:"My stomach hurts, but I don't even have a real mouth to put the food in. I'm so confused!"
bringo writes: Ah..oohh..wwheez..
Now I know why they call you "Kickback"..
Minicle writes: Bombshell: Ooo! That's the last time I play the Cello.

Kickback: ?
Starazor writes: If Skywarp ever makes dinner again, remind me to get takeout.
snavej writes: Bombshell: I shouldn't have put that cerebro shell in the supermodel's head. Now I keep feeling her barfing up breakfast, and lunch, and snacks, and dinner, and more snacks, and supper, and...

Kickback: So turn it off, fool!

Bombshell: Ma
starscream_the_eternal writes: Kickback: "What's wrong Bombshell".
Bombshell: "I've got heartburn again."
Kickback: "Regular episodes of heartburn could be a symptom of a bigger health problem called
chronic acid reflux."
Bombshell: "Rea
- Back to top -
The_Kirby writes: I need some anticid
Unknown writes: something inside me........... aaaarrrrrgggggghhhhhhh!!!!!!!
(alien bursts out) i knew i shouldnt have had the special.
Stormshadow writes: Kickback: No no...
(Bomshell spews)
Kickback: ewww, wait...where did you get carrots?
Roadshadow writes: Kickback: What's wrong, Bombshell?
Bombshell: Dammit...I always knew 5 bean burritos and 12 Big Macs would lead to one hell of an indigestion...
Korium9 writes: You said you loved me!
luevanoalx writes: KICKBACK:BOMBSHELL,WHAT'S WRONG..WRONG....
BOMBSHELL:ME NO QUIERO TACO BELL.......
Zeedust writes: He can drink hydrochloric acid without so much as being gassy afterwards...

Diet Cherry Vanilla Doctor Pepper, on the other hand, almost killed him.
Demonic Femme writes: Starscream (off screen): "Now! If anyone else wants me to blow a hole through their chest, be my guest!"
Kickback: "Oh no!no!"
Starscream: "Then GET TO WORK!"
gauthic_angel7680 writes: bombshell: oh sh*t here comes the big one. mexican food is coming back to haunt me. was it the lsd or the pot i ate... rippppppp.
sharpnell: run away.
Predagade writes: Bombshell:ME BOMBSHELL HATE GRIMLOCK. FIRST HIM TAKE BRAIN NOW HIM HIT ME HARD. ME BOMBSHELL HATE GRIMLOCK
Shrapnel: What is wrong with you?? wrong with you??
Kickback: He had one too many cerebro shells for dinner last night
- Back to top -
Screambug writes: "Ooh...a pretty bad heartburn from too much buffalo wings!"
Armbullet writes: bombshell you need to stop pruging
Prowl Worshipper writes: That's the last time I eat Thundercracker's cooking!
commander setinel writes: AAAHHHH to much tacos
commander setinel writes: AAAHHHH to much tacos
Marv writes: Whatsamatter buddy? Ate a little too much Autobot Base again?
cipher98 writes: Bombshell:Spark Attack! Kickback call 911!!
Zeedust writes: Bombshell: "Wild bean vines... Hard to digest..."

Bombshell: "They've got us listed on eBay as 'Incesticons' again..."

SHRAPNEL: Hey, it was your idea.
Riseacon writes: Ohhh, I thought that energon smelt funky.
- Back to top -