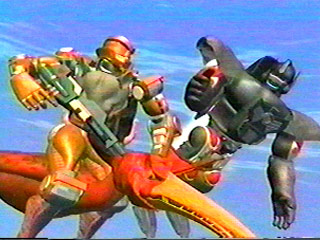 91 captions have been posted for this image so far ...

Rainmaker writes: Optimus Primal: You selling Bird Rides for 2 Cyberchips per 5 minutes? You got a license for that?
Rattrap: *Takes out gun* YOU'LL NEVER TAKE ME ALIVE
Zeedust writes: Rattrap: "Surprise, Batman! In a moment, you'll be as extinct as this bird I'm riding! Awrrk! Awrrk!"

Optimus: "I thought those were extinct."

Rattrap: "Not for another minute and a half."
Zeedust writes: Optimus: "Just so you know, Rattrap... When Season 2 rolls around, you'll have to find another ride."

RATTRAP: Ah! I was watching G1 the other day, and I saw Shcokwave riding Starscream in "The revenge of Bruticus"
Unknown writes: Easy off Rattrap - he's doesn't make it to series 2 anyway.
Beast Simpson writes: Rattrap: I do so LOVE our little romps, Terrorsaur...
pawmaster writes: rattrap:does he really ;think i'm going to shoot him? I'm just taking him home for "dinner" prime: can I come? I've never had a terrisour before.
Unknown writes: Ya think I'll win that Terrorsaur rodeo tommorow??
Pokejedservo writes: Rattrap: And they say whips are the only way to have that kind of fun. Terrasaur (thinking): You people have NO idea on how glad I am that I'll be killed off in the 2nd season!
Shadow writes: Primal: Okay Rattrap, pull over to the curb.
Rattrap: What curb?
Primal: Oh, yeah... forgot about that...
Unknown writes: Rattrap:"I told you not to push the button, but you just had to try and screw with me, didn't you!"
Unknown writes: I caught him trying to welch out on a bet we made.
- Back to top -
APOLLO writes: Optimus "Rattrap what are you doing."

Rattrap: Aww, can't we just skip the boring stuff and get right to the massacre?
Stelartron writes: RATTRAP: Hey, Optimus! Wadda ya say ta pterodactl hot wings for dinner tonight? PRIMAL: Sounds good to me!
FortMax writes: can I ride next
Silverwolf writes: Ratrap: Sex, or death. You decide Terrorsaur.

Terrorsaur: EEEEWWWWWW... could we at least LAND first?