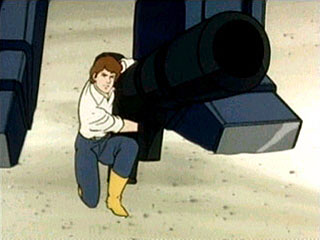 176 captions have been posted for this image so far ...

trailbreaker writes: I love his yellow boots.
Optimum Supreme writes: The true inspiration for the AC/DC song "Big Gun"
Rainmaker writes: Police: You're under arrest
Spike: ;(
Riptidemtmte writes: Still not enough dakka.
Frenchhorngirl writes: "I'M A-FIRIN' MY LAZOR!"
Heckfire writes: MAKE.
MY.
SLAGGIN'.
DAY.
cybertronianjedi writes: get me my butter....PUNK!!
darkqueen01 writes: Charlton Heston is drooling right now.
Zeedust writes: "One more joke about overcompensaing, and I swear to God I'll USE this thing!"
Zeedust writes: "...And I'm not putting it down until Shia LeBouf goes away!"
- Back to top -
seminole1 writes: Spike: Boy, I hope my body can handle the recoil of this big sum bitch.
DarkMechJock writes: You know, this would be a lot more intimidating if he could move the thing
Demonic Femme writes: Spike, "This isn't a gun- it's a canon- IN YOUR FACE!" BOOOOOM! "YEHAWWW!!!"
ShYnE writes: Spike: WoooooHooooo...Finally a member of the NRA.
ShYnE writes: Spike: WoooooHooooo...Finally a member of the NRA.
Hot§hot writes: What now biatch!
Zeedust writes: Prime: "Where do you keep that gun, Spike?"

Spike: "None of your damn business, Prime."
Zeedust writes: Spike: "And THIS is how we say goodbye on EARTH!"

(Pardon the Indiana Jones ref. ^_^)
Tiedye writes: (Spike to Megatron) "Say hello to my *LITTLE* friend!"
Unknown writes: this is what happens when you watch WAY to much anime!
- Back to top -
Zeedust writes: Prime: "Waiting for a Decepticon attack?"

Ratchet - "I'm no expert on human anat
- Back to top -
Unknown writes: i will take my big gun and shot out a mystical beam form it
ThunderCracker84 writes: Walk tall and carry a big gun
Unknown writes: [Insert Charlton Heston joke here.]
Unknown writes: Yo! Towel Rap, I'm gonna
send your ass to AllAH, with reguards from the USA.
Unknown writes: Ill show you Cliffjumper... These boots do Not make me look gay!!!
Unknown writes: Think he's compensating for something?
CapeMike writes: Spike: Hang on, prime, I'll give you your gun back as soon as I've crisped the guy who messed with the COTY polls........

Spike: *NOW* call me a pipsqueak! >:D
Shermtron writes: Prime: Say hello to my little friend
Unknown writes: After an argument involving Spikes emerging drinking problem, Sparkplug mysteriously dissapeared...along with half of the autobot base.
Unknown writes: "I can't stand Gear's complaining anymore! I'm putting him out of his misery!!!"
Galvatron Z writes: "Good? Bad? I'm the guy with the gun."
Unknown writes: "Who says size doesn't matter?"
Unknown writes: damn prime why do i have to carry your gun?!?!
Unknown writes: you yank there and it will shoot!
- Back to top -
Unknown writes: Spike: It's so BIG... Optimus: That ain't nuthin! Spike: Since when do you have a zipper OH MY GOD!
Unknown writes: You want me to put this where? Optimus: Oh comon, were friends arnt we?
Unknown writes: Optimus Prime to spike: If you shoot with my big gun i will kill you.
JP writes: Thanks for the gift guys, but um, i think you've got this size thing all wrong..
Unknown writes: I know what your think, did I fire six shots, or just five!?
Unknown writes: This is why I don't like standing between you're legs. Things are always falling off.
- Back to top -