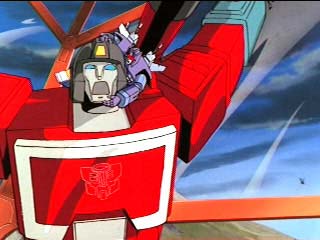 208 captions have been posted for this image so far ...

trailbreaker writes: Amidst the battle, a beautiful blue sky was visible.
BG the Robit writes: WHAT THE FUCK ARE YOU EATING MY HEAD!!!
Cmdr. Trailblazer writes: Open wide! We gotta check all the teeth!
UnderYourCloset writes: Is it Perceptor's turn to babysit?
lonrac writes: ...are you the new Titan Master mold...'SNAP'..uh oh!!!
trailbreaker writes: Rumble - "Optimus dies in the next scene."

Only people who watch Billy and Mandy get that one.
dutnam writes: Rumble: Your power steering is out.
Perceptor: It's worse than that.....We have no brakes.

Oh, and stop doing that to my neck sockets, Rumble!
Kamakaze Thrower writes: When Perceptor meets a smaller robot...
alternator_hound writes: Rumble: I knew using super glue was a bad idea.........are you uhh....single?
morgenes writes: Rumble: Aw, c'mon, it's only a LITTLE kiss! It's not like I don't know what I'm doing. I mean, I spend ALL DAY jammed into a cassette deck with another guy.
Perceptor: Aggggghhhhhhh!
snavej writes: Perceptor: I will survive this and go on to do another caption session in a few months! I think it will involve a titanic pencil.
juggaloG writes: R: Let's play a game of BREAK THE AUTOBOT'S NECK!

P: Run, Blaster, save yourself!

B: No way! I think my cassette 'Bots wanna play a game of BREAK THE DECEPTICON'S NECK!
crypto199 writes: Rumble:WWWWWWWWWWWEEEEEEEEEEE! Your the best Dad ever!
- Back to top -
Zeedust writes: Perceptor: "You fed him after midnight?"
Scatterlung writes: Rumble: Hey Frenzy! You should see this guys brain! I can't believe it fits in here!
little_fly writes: pre stop hanging on to my mouth it hurts and besides i got tooth ache!
rumbble i am sorry no can do i have bewen sent here by megatron to demolish you!
DestronMatrix writes: Rumble:"first we crack your head then we crack your nuts."

Perceptor:"run blaster and save yourself"

Blaster:"no way I gotta stay"
luevanoalx writes: PERCEPTOR: IF YOU ARE UP HERE,WHO'S KEEPING AN EYE ON OUR TOAST??
RUMBLE:TOAST?,WHAT TOAST??
PERCEPTOR:AAAAHHHH!!!!
Draego writes: Perceptor just saw Elita one and Arccee getting it on, Rumble has seen it all before
prime idiot writes: If you don't do as you're told I'll sing a spice girls song.

[Perceptor:] You say you're going to screw my head off? GET OFF!!! Perverted humanized Decepticon!!

Rumble: Oh you mean Eject? I kicked his butt and Ramhorn is out in the field grazing. Hahaha!!!
Pokejedservo writes: Perceptor: For the last time Rumble my head does not go that way!
Bat Primus writes: Rumble: " Did you know that Magnificus is your evil twin!"
Acelister writes: Rumble: "I'm tellin' ya, you need a new image. First to go is the helmet..."
Perceptor: "But its attatched! Stop pulling!"
Crashinibon writes: Perceptor was shocked and horrified by Rumbles version of whispering sweet nothings in his audio modules.
- Back to top -
Ren78 writes: Perceptor : "Its not a tumor!"
Road Turtle writes: Rumble, "pssst....I know three little Mini Cons who stole your name..."

Perceptor, "WHAT! I'll kill'em! I'll kill'em all!!"
Tammuz writes: someone told rumble perceptor was a giant pez, and he wants candy!
darkwind25 writes: Perceptor: Flash, ah-ahhhh, saviour of the universe!! Flash, ah-ahhhh, he saves everyone of us!!
Zeedust writes: It's been said before, it'll be said again, but as PErceptor just found out...

rumble: i told u to shutup perceptor. there is nothin there.

perceptor: i'm telling u i saw something.
(what percepor saw was the most scariest site *Optimus Prime giving Megatron a hug*)
red_ensign writes: Rumble Says: Must...Close...Mouth...Must...Make...Perceptor...Stop...TALKING!!!
- Back to top -
the purifyer writes: rumble: can we go to the circus and get ice-cream? if you don't i'll scream so loud even cybertron will hear!
NOBODY LOVES WHEELIE writes: Rumble,"That does it you left a spot on that window! CLEAN IT BETTER!"
dolenarda writes: "Hey what else do you have in there?"
gauthic_angel7680 writes: Holy Sh*t, i have got to stop smoking crack. I starting to see robotic purple faires! Holy Sh*t there is one on me!! Help me get it off, Blaster!!
Binaltech Bombshell writes: Proof that Transformers can get pimples.
NOBODY LOVES WHEELIE writes: I'm loving my new Cassettebots gone wild DVD!
Prime805 writes: Percy: OH MY GOD R U TELLING ME THERE IS NO SANTA....NOOOOOOOOOOOOOOOOOOOOOOOOOOOOOO
Ransom writes: Perceptor: *examines the UCC pic* That is very obviously PhotoShop-ed. I have never behaved in such an undignified manner.

Rumble: But I look just like my handsome Decepticon self!

Perceptor: An even more telling clue to its falseness.

Perceptor: "How much longer does this guy have to stay alive to sell toys?"
TheRoMan writes: "They done reckoned they heard a screamin' comin from the sky, and just about then...them Duke boy's, well they looked up. And you'd never believe what them and ol' Uncle Jesse saw."
- Back to top -
Chromia writes: Awww Crap!! I'm getting my skidplate kicked by a tape, for Cybertrons sake!!
Chromia writes: Mommmmmmmmmm! He's touching me!
NOBODY LOVES WHEELIE writes: Rumble,"I....WANT....MY....TWO DOLLARS!"
-Better Off Dead (ref.)
Road Turtle writes: Rumble, "Give me the codes to this base, or I'll start playing Spice Girls...again!"
Road Turtle writes: Perceptor, "HELP! I'm being attacked by a Britney Spears tape!!!"

Blaster: No way!! Two can play!!
*Blaster sends out Eject, Eject starts humping his head too*

Perceptor: AAAAAAAAAAAHHHHH!!!!!!!
Tusko writes: Much like humans who are embarassed with spinach stuck in their teeth, Perceptor was mortified when he found Rumble stuck between his telescoping canon and shoulder.
darkwind25 writes: Here we see Perceptor, at his ugliest.
thexfile writes: rumble tests his "chukky" inpersonation on perceptor and i think it worked !!

rumble : hey perceptor creap wanna playyyyyy
Acelister writes: Perceptor: "I'm telling you, it will be better if YOU are the dummy..."
Rumble: "What did you call me?! Say Bottle of Beer!"
Rumble as Perceptor: "Gottle of gear!"
1337W422102 writes: Perceptor: "AUGH! That's NOT my Mini-Con Powerlinx point!"
- Back to top -
Alphatron writes: Removing the head of a Perceptor is a difficult task... Rumble learned that the hard way.
Airstrike writes: This zit just REFUSES to pop!
HookX5 writes: "Got headlice?"
scattershot78 writes: Rumble: now come on you big scaredy cat I told you if you keep putting off your dentist visits things are just going to get worse!!

Perceptor: "Just because I told you the truth you don't have to sic your gay midgets on
NOBODY LOVES WHEELIE writes: Jim Ross,"That son of a bitch Rumble takes em down with a bulldog headlock."

Perceptor: "Oh Primus I hope not!"
darkwind25 writes: Frenzy: C'mon Perceptor, it really is a great movie if you just give it a chance. Please watch it with me, please!!!!!!!!!!!!

Perceptor: I don't like Battlefield Earth!!!!!!!!!!!!!!!!!!!!!!!!!!!!
krukid writes: help I'm getting raped by a tiny purple thing.
DeltaSeeker writes: Perceptor tries out his new career as a rapper, while Rumble tries out his new career as a headset.
Lorekeeper writes: Donut Cashier: We don't have any bear claws.
Perceptor: Well in that case, what do you have?
Donut Cashier: All we have left is this box of one dozen starving crazed cassettacons.
Perceptor: All right, I'll have that... Ahhh gettemoffmegettem
Nemesis Cyberplex writes: Rumble: there, there. It's all right. You were just having a bad dream.
Perceptor: But it was so real. Hasbro came up with some decent Alternators, but they made Swindle look like Trailbreaker & Dead End look like Sunstreaker, but then Takara ca
Nemesis Cyberplex writes: Rumble: Pipe down, I'm just seeing ifyour head's not too big to put on a Vader helmet for the party later.
NOBODY LOVES WHEELIE writes: Perceptor just didn't understand the concept of listening to tapes.
SeekerInAFakeMoustache writes: In this rare special episode of "Secret Taskforce GoRanger," General Microscope Perceptor is single-handedly brought to judtice by the mysterious Purple Ranger.
Unknown writes: Perceptor "For the love of god... what is it?" "It's got razor sharp teeth." "Oh god it bit my ear, not my EAR!!!!!"

Rumble "I love you daddy."
- Back to top -
Kevinus Prime writes: Percepter screams like a little girl when Rumble gives him a Wet Willie...
Kevinus Prime writes: "Blaster! If I don't make it, tell Tracks I love him..."
elmekia writes: The Transformers' version of "Gulliver's Travels" stopped production abruptly due to the frequent disputes between the cast.
1337W422102 writes: Saint Paddy's Day on Cybertron:

He imagined little Rumbles crawling all over his body.
1337W422102 writes: Perceptor: "...and you're SURE that you graduated from Chiropractor school?"

Perceptor,"HOW DID YOU KNOW WERE GAY?!"

Perceptor: WHAT!? NO! I'm a VIGIN!
Acelister writes: Rumble: "Turn into a microscope! I want to look at a peice of dirt!"
- Back to top -
imyurnuleeda writes: Just goes to show you no matter how big a nerd you are, the bullies will pick on you!
saiyan_prime writes: Blaster to Prime (off screen): "Now that I got Perceptor back on the sauce I gotta keep him pretty sloshed"

Perceptor: (hic) "Awww, that's OK Blaster, I got my new sponsor to help me." (looks at Rumble)

Rumble: "DRINK!
saiyan_prime writes: Rumble: "You did fine, laddie. Real fine. Now you've got to burn the house down. BURN THEM ALL!"

(Perceptor starts picking his nose)
wavelength writes: perceptor=AAAGGGH human sized transformers, what will be next?
rumble= a toysized you once i rip out your subspace cuircuts
NOBODY LOVES WHEELIE writes: Rumble,"So the quarter goes in dis opening?"
NOBODY LOVES WHEELIE writes: Rumble,"Ohhhhhhhh I see the problem. I'm afraid that tooth is gonna need a root canal."

Perceptor: Get off! I want a REAL chiropractor!
Ransom writes: Perceptor: By Primus, is that a purple pimple?!
Damolisher writes: Rumble: And this is how Liu Kang gets killed in the opening of MK Deadly Alliance!
Perceptor: Lovely! Now get off!
Ratbat writes: Gotcha, Perceptor! Let's see how the Autobots fare WITHOUT your brains!
Ratbat writes: Hey!!! Let go of me, Rumble!
DarkDranzer writes: Teenage Soundwave: *outside* Ravage, Ratbat, Rumble, Frenzy eject, Operation: Obliterate all Autobot Nerds from Cybertron High School!!

Teenage Perceptor: AIIE!! BLASTER!! GET OFF YOUR OVERSIZED GLUTENUS MAXIMUS AND HELP ME DAMN IT!!

Teenage Blaster
- Back to top -