Sari stands next to a dead Optimus Prime 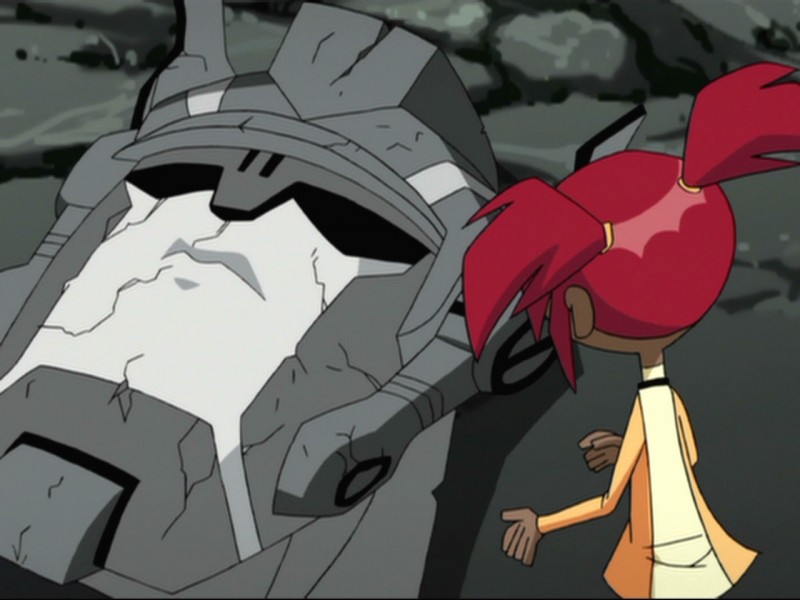 81 captions have been posted for this image so far ...

Nexus Knight writes: Sari: Why does this happen everytime I meet new people...?
snavej writes: Maybe if I turn grey and lie down for a bit, she'll go away.
snavej writes: She had wandered into an old black-and-white cartoon and had to leave quickly before she was infected by old-time values like decency, industriousness and hard-core prejudice.
BG the Robit writes: Sari: But we didn't even make out yet... :,(
BG the Robit writes: Did you get a new paint job before you died?
Kilgore writes: When your mom walks into your room at night and you pretend to sleep
DarkEnergon writes: Sari: Well, he's dead, and clearly gone forever with no chance of coming back.
Victinoko writes: Someone forgot to put on cream today
Sigma Magnus writes: "Dangit, this is the tenth time this month..."
Cmdr. Trailblazer writes: Sari: "Get up, Prime. I know you aren't gonna be there forever, so save us the drama and stand up."
- Back to top -
Riptidemtmte writes: "Oh, well. Time to wait for an Animated Rodimus!"
TF Cagle writes: Optimus: Why do I have to die in every show, and yet Megatron doesn't ever seem to die!

Producer: Didn't you ever see Galvatron!

Optimus: Oh yeah, right. yeesh.
TheWeirdOne12 writes: But prime.... I'm just a soldier! *COUGH COUGH* I mean a kid!
Caleb.tron writes: Really Optimus this has got to be the 15th time at least well.. at least Megatron or Hod Rod didn't do it this time
Saphire writes: Go change, Prime. Grey is not your color.
kruiz220898 writes: Woohoo Optimus is dead!!!
spartanH85 writes: This is really what happened when Optimus learned how humans reproduce
Red_Sun writes: Sari:"Its alive! My Frankenprime lives!!"
MarkNL writes: Daniel Witwicky enters the Animated dimension, using a portal: "Déjavu!"
rodimus27 writes: PRIME:I new energon bathing was a bad idea dammit bumblebee
- Back to top -
shortwave writes: Dammit girl im dead cant you tell buy the new paintjob?
kaseycuyler writes: Sari: "so THAT'S what you look like when you don't put your makeup on in the morning!"
Pokejedservo writes: Sari: There now my clay recreation of Optimus' head is almost complete!
kersheisi writes: Last time I turned grey, Spike's annoying little spawn stopped talking to me. Maybe that will work with this one too...
omegasupreme69 writes: can i get an autograph if Your like still alive and stuff
maroyasha writes: He turned grey! He's actually dead this time!
Heres a Hint writes: knowing that x-factor is going to be the 2012 xmas no 1 was too much for him to take
Road Turtle writes: Sari, "...and when I told him where human babies came from, he fell over and got all grey..."
Revenge of Bruticus writes: (whispers) "Prime, you can get out now. The director called 'cut'."
Zeedust writes: "Robots in Disguise" is one thing, but trying to camoflauge yourself to match the pavement is taking it a bit too far.
- Back to top -
SentinelA writes: Sari: Prime, I think it's time you cut back on the tanning bed.
bossman328 writes: OP: "Sari...it is to you I pass the matrix of leadership"
Sari: "Prime...I'm just a stupid kid...I am not worthy...and I don't want it!!"
OP: "you ungreatful little..." (dies)
Trikeboy writes: You died AGAIN!!!
Ryuki writes: Sari: Romeo; Oh, Romeo. Why thou have to die ?
Maestro Meister writes: You murderers!! You blew it up! Damn you! Damn you all to hell!
Maestro Meister writes: You murderers!! You blew it up! Damn you! Damn you all to hell!
Maestro Meister writes: You murderers!! You blew it up! Damn you! Damn you all to hell!
Sentinel Maximus writes: "Do not grieve,... soon I shall be one with the,... gahhh,...uhhhhhh"
Dessolock writes: He's not quite dead! He's getting better! oop.. he's died...
Hotrodimust writes: Another one bites the dust
- Back to top -
snavej writes: Given Optimus's great size, the cost of a proper funeral was over $250,000, so it was decided to leave the body in a vacant lot for mechanics to strip for parts and scrap.
WolfSpider1979 writes: And... He...Is...OUTTA HERE!
TFanPage101 writes: Sari: "Optimus, you can't die, who's gonna save us now."
Ghost Prime: "Arise, Rodimus Prime."
Sari: "WAKE UP!!!!!"
Egghead2568 writes: Oh not again! Oh well, i'll just reactivate your ass later.
axiom4t2 writes: Dude! You are soooooooo stoned!
Bumblevivisector writes: And so did the power of the Allspark grant Tara Strong a glimpse of the fate of SymBionic Titan.
Ultra Markus writes: rachet: I fear the wounds are fatal!
Sari: Prime! you cant die!
Prime: NEVER FEAR SOON I SHALL BE ONE WITH THE MATRIX!
griftimus prime writes: the future of transformers prime. children kill the show
Ultimos writes: Hasbro: Hey Sari, how is the "Dead Prime" re-paint?
Sari: I didn't mean ACTUALLY kill him!
waaaaghlord writes: Alas poor Optimus. I knew him Bumblebee, a fellow of infinite mirth.
- Back to top -
snavej writes: Sari: Can he be saved?

Ratchet (out of shot): No, his ratings were too low. The audience is slipping away.

Bumblebee:I think it would more like a Kiss Player scene to me...
Gundamu writes: She warned him about taking Safe Search off. He didn't listen...
PrymeStriker writes: Again?
Bumblevivisector writes: SARI: Wait, was this whole frame black & white before I walked in? I thought Shout! was gonna' do better than Rhino on cartoon restoration- or is Ted Turner behind this?
Heckfire writes: SARI: ...wow, he took that "how babies are made" thing way worse than I did when I found out.
datguy86 writes: Weight of chin at time of death... 250 lbs.!? Why that's twice as much as when the subject was alive!
Marcus Rush writes: So umm, where's the candy?
Shadowstream writes: Cheap cracked plastic, faded colors, neutered light piping... either it's a knock of or modern Hasbro.
Optimus-Pie1 writes: Yellow Dress: 23.45
Hair ties: .75
Key to the all spark: 10.15
Failing to invoke emotion by ripping off one of the most heart wrenching death scenes ever" Priceless