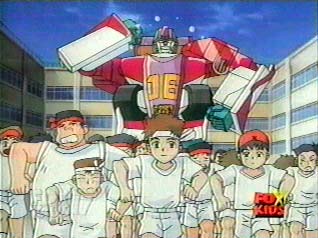 161 captions have been posted for this image so far ...

Rainmaker writes: Skid-Z: HOW AM I LOSING
dirtysock47 writes: i thought it said CAR marathon not a HUMAN marathom
Heckfire writes: *SQUISH!* Whoops! *SQUISH!* Sorry! *SQUISH!* Crap! *SQUISH!* Gah, maybe I should stick to CAR races... *SQUISH!* Dammit!
darkqueen01 writes: Skid-Z just feels really sorry for the fat kid there on the left.
Dragon_Convoy writes: I'm gonna beat all you little twerps
Zinger writes: Run faster! The Fox Kids emblem is beating us! D:
Zeedust writes: "Gah! Why do all these little kids look drugged? Something WEIRD's goin on here, man...."
blank writes: MUST...SQUISH...LITTLE...KIDDIES
Unknown writes: CHARGE MY ARMY OF LITTLE BOYS!!!TOGETHER WE WILL KILL MICHAEL JACKSON!!!!!!!!!!!!!!!!!!
DarkDranzer writes: Skid-Z: Huff...huff...I knew I shouldn't have had those double cheese burgers and chocolate milkshakes!! Especially before a Fun-Run...Argh the stuff Prime forces me to do...
- Back to top -
Galaxy_Convoy writes: music blasting from Skid-Z's radio: Proclaimers, i would walk 500 miles.

Skid-Z: come on, its not that bad! It could be worse, it could be richard simmons!

Kids: *scream*
Warhead writes: DESTORY THE PUNY HUMANS!!!
Masterpiece Prowl writes: IIIIIIIIIIIIICCCCCCCCCCCCEEEEEEEEEEE CCCRRRRRRRRRRRREEEEEEEEEEAAAAAAAAAMMMMMMMMMMM!!!!!!!!!!!
Demona writes: *thinking* why are they outrunning me!?
Zeedust writes: Nothing quite like the embarassmentof getting there and finding out you're the only alien robot who came.
juggaloG writes: This is what I get for siding with the Autobots. Prime made me the chaperone for a kids' race! Well, next battle, I'll turn against the Autobots & hand Prime to Megatron on a silver platter MYSELF!
Kal-Seth writes: Skid being an easily depressed transformer finds he can take great self-esteam in beating small earth children in races
Tiedye writes: SKIDZ- Man! Who ever thought these little human kids could run so fast! Huff...Puff.
Tiedye writes: SKIDZ- "You punks!" " I'll teach you to deflate my tires." KIDS-"Run for it! he's on to us"!
Unknown writes: when they made "the autobot's run" for first gen. transformers, they left out this scene... sad ain't it, mirage shot the copy cat and he fell on all those kids.
- Back to top -
Zeedust writes: Fear Skid-Z Kong and his legion of minions of invisible exercise bikes! (Most nonsensical caption that still manages to relate to the pic, EVER! Go Nemmie, go Nemmie...!)
Shellfox writes: GET BACK HERE AND DIE FRED!!!!!!
Unknown writes: Damnit! I'm gonna be late for my first ballet lesson!
Minicle writes: Skid-Z: I'll teach you badly drawn punks to piddle against my tires!
Unknown writes: Skid-Z: Okay, all I gotta do is win this race and I can prove myself to the Autobot brothers AND Hot Shot will stop calling me a wimp! Huff...puff...
Zeedust writes: "Move aside, 'scuse me, outta the way, pardon me! Giant robot running REALLY LATE! Hey! Move it! Don't MAKE me step on you!"
Nightshadow writes: Kid: Megatron's coming! Skids: AAAAAAAAAAAAAAHHHHHHHHHHH!
Suzuki writes: Tonight on the ten-o-clock news; the latest mob rush for the new Optimus Prime Armada figure...
gir writes: "aww c'mon back i'm not going to hurt you!!"

Kids: AHHHHHHHHHHHHHHHH!!
Unknown writes: I can't let Fred beat me.
- Back to top -
Broadside writes: mmm a bunch of kids running away from a distressed looking Skidz? That explains itself!
Zu Darkness writes: Skids weight loss program...make them run or else... Fat Kid: ah man I coud really use a donut right now
Zu Darkness writes: S--h man run it's gonna runs us over.

Spectatour: Hey isn't that mirage...Other spectator: no that Skids... Spectator: what the F--- where they thinking of drawing two fomulia one racers
Unknown writes: Kid with red hat:From what school is that guy of 20 m? Kid next to him:I have no idea, the only thing That I hope is he's not gonna stand on us!
Unknown writes: WHAHAHAHAHA!
He's never get on 1e place anyway...*transform* shall be better to get forward
Unknown writes: This is for making fun of my in track, I'll kick your asses!
Unknown writes: Digimon!
Unknown writes: EY LITTLE BOY WANT A LOLLY!?
Firestorm writes: May wanna run a little faster kids! Someone in the chem lab just cooked up some Nitro Glycerine!

Skid-Z: F*ckin eh, run for it!
Unknown writes: Dehydrated Kid on the Left Corner: I smoke too much. Fear leads to Anger...Anger leads to Stress...Stress leads to Doobies...And Doobies lead to Twinkies.
Unknown writes: GTS-Z!!