Soundwave runs away from Nitro 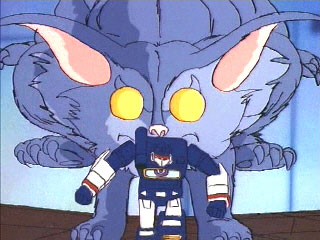 89 captions have been posted for this image so far ...

digigirl411 writes: Play with the kitty they said. It’ll be fun they said. I am not having fun being chased by a giant kitty.
UnderYourCloset writes: Time to go all nitro on yo ass!
Rainmaker writes: Soundwave now regrets wearing the attractive cat spray
Frenchhorngirl writes: "Alert, aler...Wait, is that a CAT?!"
dirtysock47 writes: what the f--- thats one big bug
michellatron writes: Giant kitty Nitro superior, Soundwave inferior!
SoundMaster1 writes: Soundwave-superiAAAAAAAAAAAAAAAHHHHHHHHHHHHHH!!!!!!!!!!!
ghostscream127 writes: I knew ws transfomers was a VERY VERY BAAAAAAAAAAAAAAAAAAAAAAAAAAAAAAAAAAAAADDDDDDDDDDDDDDDDDDDDDDDDDD idea
Thunderboomer writes: Soundwave never trusted another chip given to him by swindle ever again
Judynator writes: Soundy: Ravage?
Cat: Im hungry! Very hungry! I eat robot!
Soundy: GAAAAAAAAAAAAAAAAAAAAAAAAAAAAAAAAAAAAAAAAAAAAAAAAAAAAAAAH!!!!!!
- Back to top -
Unknown writes: soundwave:ok i will have to cut back on the reshlers
ZaberFang writes: Why doesn't Soundwave just fly away? I'm sure the cat can't jump THAT high...
Kamakaze Thrower writes: After this incident, shrinking devices for Transformers were officially discontinued.
kanesomers writes: Yep, its official. The comic book's continuity is better.
Roadshadow writes: SW: Gahh!!! Run for your lives! It's Ratzilla!
Marv writes: ...and this is the reason why the Decepticons stopped testing their new bioweapons on animals...
Marv writes: When Soundwave found this photoshopped pic on Starscream's computer, he wasn't amused...
Marv writes: And suddenly, Soundwave understood why the first stage of his punishment had been rolling through a bath filled with meat juice...
Marv writes: Okay! Thats it! From now on, I'll never get myself a pet that isn't small enough to fold up into my chest tape deck!
Marv writes: There was good new and bad news: the good news was that the experiments with mass-enlargement proved to be extremely succesful. The bad news was that the experiments with mass-enlargement proved to be extremely succesful...
- Back to top -
Marv writes: A giant man looks up from his newspaper and see this happening on the floor.
"Honey! Do we still have that exterminator's phone number? I think we've got Decepticons in the kitchen again!"
DarkDranzer writes: *After taking this vacation to the "Oversized Safari" as recommended by Starscream, Soundwave vowed to get revenge on the lil' red, blue and white mutha ****er!!*
gauthic_angel7680 writes: That's it no more Horoin for me. I can't stop tripping and this one is the m*therf**ker of them all.
optimus9504 writes: and Soundwave said: " where Ravage is? I need him protect the cat from me" where he is ???
optimus9504 writes: Soundwave look around and saw the big cat.

Soundwave said: "Ahh!, oh no big cat coming to me"

Soundwave said: "feel like getting tired of the chase from the cat.. (out the b
Masterpiece Prowl writes: Soundwave: Sic him Ravage!
(Ravage looks at the giant cat, and runs away screaming)
Soundwave: COME BACK YOU SCAREDY CAT! (to himself) I'm so slagged.
Arc the ZAKO writes: Soundwave-Crap! Were did I put that ray gun? *Searches pockects* Rubber duck? No, shower cap? No, bath tub? No...human snack I was saving for later? No...DAMNIT! WERE ARE THOSE CASSET BOTS WHEN YOU NEED THEM?!
*while...*
Rumble: Got any 4s? I feel lik
Omega - Prime writes: Soundwave: thats it! no more taco's before naptime!
OP Prime writes: Next up: Soundwave VS Helgars Cat from Voltron...

Soundwave:I should have never taken that shower and used that "special" wax spray that flesh bag gave me...
Cat: ME-ow (licks lips in preperation for the kill...
-
-
clunk!
CRUNCH!
Crun
Zeedust writes: Soundwave's career as a film critic is cut tragicly short when he gives "Garfield: The Movie" a bad review.
- Back to top -
Not Sonic writes: I knew he shouldn't have kept
Buzzsaw in his chest.
Suzuki writes: SOUNDWAVE(Jackie Chan, from "Jackie Chan Adventures"): Bad day! Bad day!! Bad day!!!
Greg writes: I Told You To Feed Him, Didn't I!
Demona writes: YOU FED THAM AFTER MIDNOGHT!?!?!?!?
Mosaic writes: What Ravage dreams about after a bad day.
Nenesis Prime writes: My mother told me NOT to be cruel to animals...
BUT DID I LISTEN??? NOOO!!!!
Operation Ravage writes: Tired of being Soundwave's pawn, Ravage gets some of his friends to teach Soundwave a lesson . . .
Great Red Spirit writes: Transformer Horror Flicks #1 'Attack of the Giant Metal Eating Felines'
Soda Pop Kurtis writes: It has been proven. Soundwave is in fact one big giant rat.
OP Prime writes: Soundwave: Galvatron said this planet was harmless and ripe for attacking, Was he ever wrong... Giant alien Cats, This is the last straw... If I survive this I'm getting Galvatron's head examined. Casssats eject and fend for yourselves i need to
- Back to top -
Minicle writes: Soundwave's Cat squishing habit finelly comes back to haunt him.
Minicle writes: Soundwave: ARRGG! NO! NOT THAT BI....YARGGG!!
Minicle writes: Soundwave: Why do I get get the feeling, I'm being watched?
Minicle writes: Soundwave: I knew I shouln't have worn that Aftershave!
DeltaOmega writes: Fast as fast can be. You can't catch me.
DeltaOmega writes: here kitty, kitty, kitty!
Nightshadow writes: Soundwave: Jesus! this place needs serious pest control!!
Magnus writes: Soundwave: "Ravage, get him!"
Ravage: pauses, looks, continues licking self.
Firewalker writes: Soundwave: "When I said I wanted some pussy, this *isn't* what I meant!"
Viper 16 writes: "Heeeere kitty, kitty, kitty, OMG, slaggin' giant-bot-eating-yellow-buldgy-eyed-freaks!"
- Back to top -
Ultra Markus writes: Seems like everyone is rushing to get the Takara reissue Soundwave!
kaoslord writes: SW: I'm not sure what you did to the cat, Starscream, but when I get my hands on you, I'm gonna feed you to him.
GetterDragun writes: I promise I'll eat at Quizno's!
Seibertron writes: This is a test for HTML tags. Did it work"""????
Seibertron writes: This is a test for HTML tags. Did it work"""????
Seibertron writes: This is a test for HTML tags. Did it work"""????
Tiedye writes: SOUNDWAVE-"This is what we get for setting up base near a toxic waste dump thats near a pet store.
Unknown writes: Galvatron plays yet another cruel joke on Soundwave.
BlItZeR writes: Dr Evil: "Go get him Mr. Bigelsworth"
Unknown writes: Here, kitty kitty.
- Back to top -
crazyfists writes: "I don't think all the little cassetts in the world will help me this time."
Unknown writes: small soldiers 2! the gen.1!
Unknown writes: Suddenly Dr. Claw released his pet on Soundwave.
Galvatron writes: SOUNDWAVE: "This is one of the dumbest episodes I have ever been in! Where is my loyar?"
Unknown writes: Soundwave starring in The film Honey I Shrunk The Kids.
overdrive writes: what do you mean there's a giant cat behind...
AAAAAAAAAAAAAAAARRRRRRRRRRRRRRGGGGGGHHHHH!!!!!!