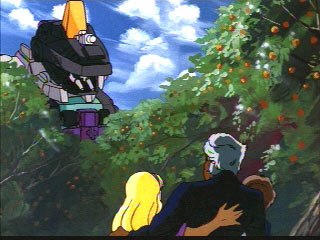 123 captions have been posted for this image so far ...

Somewhere, somehow, Gendo Ikari smiled.
Towline writes: NO we moved away from Japan because America has no giant monsters!
Black Hat writes: What are you doing to those poor children?
grimlock1972 writes: After the way Trypticon got a job in the movies as Godzilla's stunt double.
gema writes: Dad, i told you to trim the hedges!
- Back to top -
#Sideways# writes: When the G1 Series was cancelled, he had no choice but to sign up for Jurassic Park.
cybertronianjedi writes: random japanese man: GOZILLA!!!!!
SoundMaster1 writes: tripticon:imma chargin mah lazer!
guy:what?
tripticon:imma firin mah lazer!
guy & kids:aaaaaaaaaaaaaahhhh!
tripticon:SHOOP DA WOOP!
people:aaaaaauuuuuuuuggggggghhhhh!!!!!!!!!!!!!!!!!!!!!!!!!!!!
Gigantatron writes: Trypticon: Me Trypticon love a good movie."
shockticus writes: Did someone call about a broken sink?
Jetfire1978 writes: Boo
ACStarscream writes: Trypticon: The best home security $15 million can buy!
ChevyTron writes: Blonde Girl: It looks like it wants to eat us!
Indian Man: We ARE in the middle of an orchard.
Nemesis Jason writes: Man: Don't be alarmed my dear, that just my Trypticon toy. I'll show him to you after we un-shrink ourselves.
Swerve writes: Hello, I'm Chris Hanson, a little known alt mode to Trypticon and investigative reporter for Dateline NBC's "To Catch a Predator". Would you mind telling me sir what you are doing with those underage children out here in the middle of
- Back to top -
Split Second writes: On this episode of "When Animals Attack!" A giant robot dinosaur attacks two children and their grandfather.
hot rod 907 writes: trypticon: I need citrus to get rid of this damn flem!
Unknown writes: When news got to the Transformers about the movie Both Optimus and Megatron sent in Typiton to Dreamworks studions. Typicion wasen't really known for a good keen sence of directions and Attacked Univerisal studios instead
darth_paul writes: See we told you that the new Michael Bay Transformers movie could be compared to the American version of Godzilla, but NNNNNNOOOOOOOO you would't listen.
Unknown writes: With the Transformer series at it end Trypition became the new sEcurity guard for Sunkist Oranges
Unknown writes: Indian: Its finished! My LEGO Dinosaur is finished!
Kid on right: Is that a freakin laser beam attached to his freakin head?! OMFG!!!
Superion_007 writes: Trypticon: Oops, I'm sorry. I thought this was the movie auditions for the next Godzilla movie...
Autobot bubbs writes: Helloooo wabbit.... huuh-huuuuh!
Death Gunner writes: Wild Trypticon appears.

Trypticon: "Does it look infected to you?"

Little Girl, "No grandpa, that's Tryticon, and he's evil."
Road Turtle writes: Grandpa, "...and this children is your legacy!"

Little Girl, "Oh Cool! We get our own giant robot dinosaur!"

Grandpa, "Um, no, the orchard was your legacy. That's Trypticon, and he's gonna kill us all; sorry kids,
Snoball writes: eewww, humans in the salad bar!! I'm never eating here again!!
Repainted_Transformer writes: Found You! Now it's my turn to hide.
- Back to top -
NOBODY LOVES WHEELIE writes: 1992

Man,"This is it kids the new home I purchased."

Girl,"Ughhh Dad, well you see there was this one night I was drinking and......"

Man,"Oh jeez fine...OH MIGHTY DINOGOD I SACRIFICE THIS VIRGIN BOY IN YOUR
SilentBlaster writes: And all Trypticon wanted was an orange.
ReinaHW writes: *Reference to how Transformers is made into Cuteformers/Kidformers*

"It's a giant robot thingy! Our limelight has been stolen!"
"Now Transformers will be popular again and kids will learn to use their imaginations!"
"It
Whocares writes: Barney got sick of singing nursey rhymes.

New york got sick of being the worst city on earth


Can any body see a connection?
Suzuki writes: MAN: Oh no! Scarface has found us!

(This is a "Land of the Lost" reference, just to let you know.)
Unknown writes: Chester, stop... stop it! I think we're being watched.

(they're dancing, i swear)
Unknown writes: *eat
Unknown writes: Grandpa: "Here, it the children and spare me."
Girl: "No, Grandpa! No!"
Grandpa: "You'll do as your told, Sally."
- Back to top -
The King writes: Trypticon ask: excuse me humans do you know which to the Autobots base?

Old Man: No
XeroSyphon writes: I saw this movie. I think we're supposed to stand still and hope it goes away.
Tiedye writes: (GRANDPA)- "Come to the orange grove children I got a gift for you!"
(Children)- " WOW you got us our own transformer!"
(GRANDPA)- " Yes I got him on EBAY." He was dirt cheap."All the good transformers were taken by th
trailbreaker writes: Why are those people just standing there? I would run like hell!!!
DeceptiGojira writes: At first, I was going to write a joke about this incident, but since the word Fagg*t and Rep*blican are "bad words" here, I'll just pass.
snavej writes: Girl: Poor dinosaur! It has a car bolted to its chest!
snavej writes: Being new to Earth, Trypticon mistook the orange trees for the planet's dominant native life forms and decontabuquoggalized them. The humans went on to invent a quirkafleeg and then have many nervous breakdowns.
kntstar writes: Blonde Girl:"Thats the second biggest dinosaur robot I have ever seen."
Trypticon:"Second? Who is the biggest?"
Grey-Haired Man:"The one behind you."
Trypticon:"Uh-ho"
transformerguru writes: May I borrow a cup of sugar?
TheSlup writes: Only YOU can prevent forest fires.
- Back to top -
grimlock2000 writes: Trypticon:Ooooh, yummy.
Two eaten people later ...
Girl:why didn't you eat me?
Trypticon:Your hair's paint job is yellow, yellow gives me acid indigestion.
grimlock2000 writes: Trypticon: Ooooh,yummy.
2 eaten people later....
Velos writes: Trypticon: Oh wow, Lunch Time.
Acelister writes: Trypticon: "You can live if you can guess my name."
Boy: "Rumplestiltskin!"
girl: "Don't be stupid, Timmy!"
Trypticon: "How did you guess? How?!"
Girl: "... O...Kay..."
Acelister writes: Girl: "You can't hurt us! You're not real!"
One squished child later...
Boy & Man: "What do you want us to do, oh Master!"
Acelister writes: Trypticon: "I don't think I'm on Cybertron no more..."
Girl: "You've never been to Cybertron..."
Trypticon: "In my dreams, I have..."
Boy: "Oh great, now you went an' made him cry..."
transformerguru writes: Daddy he followed me home... Can I keep him?
lokust writes: Um hey... you guys don't happen to have any TP do you? ... ... ... ...STOP LOOKING AT ME!
Kevinus Prime writes: "Daddy, this is the boy I was telling you about!"
Kevinus Prime writes: "NO! I'm not a friggin' Magazord!"
- Back to top -
Kevinus Prime writes: "I love you, you love me...."
NOBODY LOVES WHEELIE writes: Trypticon,"I KNEW IT! Metroplex poops humans!"
Addiethunder writes: When Trypticon Attacks....and has to be shot!
snavej writes: Luckily for the humans, orange juice was lethal to Transformers, especially the humungous city-sized ones.

Trypticon's dying words were: 'This is certainly humiliating but not as bad as being killed by Perry Como records, like in the film Mar
snavej writes: Girl: What is it, Grandpa?

Geezer: Could be Truckasaurus.

Boy: But that's just a fictional mechanical dinosaur from the Simpsons.

Geezer: This is Gary Glitter's most disturbing comeback tour yet!
karrde writes: Girl: RUN! IT'S GODZILLA!
Old Man: It looks like Godzilla, but due to international copyright laws - it's not.
Boy: STILL! WE SHOULD RUN LIKE IT IS GODZILLA!
Girl: Though it isn't.
Zeedust writes: Nobody wanted to telll Mecha-Godzilla how his Extreme Makeover had really turned out.
NOBODY LOVES WHEELIE writes: Trypticon,"I say, do have any Grey Poupon?"

Man,"No, but now I have brown underwear."
metalformer writes: [Trypticon]: Arrrrrrg!! Errrrrr... excuse me? Is this the set where Auditions for "Jurrasic Park 4" is being held?
[People]: ....
- Back to top -
trailbreaker writes: Trypticon scared that man so badly that his hair turned gray.
trailbreaker writes: Are those peaches or apples on the trees?
Thanatos Prime writes: Hey you fleshys! Get out of my orange grove!!
snavej writes: Old Man: Don't worry, kids. It's not real. It's only the mushrooms making you see it.

Girl: How do you know what I'm seeing on my trip?

Boy: I don't like this, man. I'm going back to horse tranquilisers tomorrow.
Castle74 writes: I'm looking for Mr. Devlin or Mr. Emmerich? I heard they wanna do a sequel!
Latavia writes: "Oh no it is Godzilla, run, run away."
Dclone Soundwave writes: Hmmm, the little boy, or the little girl?

Don't take them, take me instead!

Man,"Billy, pick u
- Back to top -
NOBODY LOVES WHEELIE writes: Trypticon,"Do you know the way to San Jose?"

Girl: "Is that Barney daddy?"

Grandpa: Go ask your Grandmother....
Thanatos Prime writes: You puny humans haven't seen a large white city sized robot running around have you?
Optimusizzy writes: A young Steven Speilberge loks up and says to himself "I can direct 2 movies involving dinosaurs and robots that transform!"
- Back to top -
NOBODY LOVES WHEELIE writes: God catches Adam and Eve around that Damn knowledge tree again!
big finale writes: tripticon:die human
human:no way
child:help dad
other child:whaaaaaaaaaaaaaaaaaaaaaaaaaaaa
Powermaster Jazz writes: Woah....I think this stuff jus' kicked in.....there's a big dinosaur with a banana on his head.
soundwavegt writes: #Whiiile, strolling through the park one daaaay, In the merry, merry month of Maaaaay......#
Onyx Prime writes: "Where's the beef?"
Archanubis writes: Trypticon: What? I just came here to buy a few tons of tangeloes!
Acelister writes: Old Man: "Take what you want, just don't hurt me!"
Boy: "Dude!"
Old man: "I mean don't hurt either of us!"
Girl: "DUDE!"
Trypticon: "I was only here to boost my iron level by eating trees... But
Acelister writes: Trypticon's one vice: Watching human's pick fruit.
Acelister writes: Trypticon: "Yeah, that's it... Now smell her a little..."
Boy: "But, Grampa..."
Old Man: "Shh, Johnny... Just do what the scary robot wants..."
ZaberFang writes: Peek-A-Boo!
- Back to top -
snavej writes: Decepticons get tough on child abuse.
snavej writes: I knew we shouldn't have given that kid so much goddamn Lego.
snavej writes: It is the year 1989.

The script writers of 'Dynasty' are given an unexpected opportunity to end the long-running series and at the same time avoid paying some of the syndication fees to the actors.

'Brought in Trypticon' became a
Unknown writes: urrrhhhhmmmmm............got some tissues?
009* writes: Big Brother's watching you... and he's taking aim.
Frobman writes: HAH! I Caught everything on film! Now everyone will know!
cybertron_megatron writes: Trypticon: These are Megatron's oranges. We've taking a new strategy to defeat the Autobots by creating a fake fruit shop. When they come in for a refreshing piece of fruit or fruit drink, we will jump out and the Autobots will be vanquished for
MechaRaptor writes: Trypticon:'Hello,I'm your new next door Deception-City!'
MechaRaptor writes: Trypticon : The best protection against orange thieves!