Baby Marissa minus her clothes 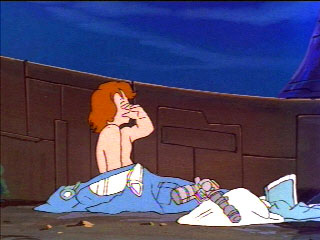 73 captions have been posted for this image so far ...

trailbreaker writes: Jared Fogle approves.
Riptidemtmte writes: "Birth of the Kiss Players..."
Black Hat writes: How is this legal?
Heckfire writes: Hello, Sunbow Entertainment. My name is Chris Hansen. I was wondering if you'd please have a seat over here...
ChevyTron writes: Hurry, get the gun before she blows her brains out! I've seen babies, they all have an oral fixation.
Swerve writes: Grimlock: Me Grimlock somehow understand that Marissa turn from adult into baby, what Grimlock not understand is where did Marissa face go?
hot rod 907 writes: grimlock: if she don't wear diapers, me grimock not need to change her!

kup: the you need to use a pooper scooper!

grimlock: me grimlock say D'OH!
Halo2addict writes: G1 Grimlock: Where Keanu Reeves when him needed? If he here, he use powers he have in Wachowski brothers' movies, Matrix trilogy to make Baby Marissa into Adult Marissa, only put her clothes back on her first.

Kup: Uh, Grimlock Keanu Reeves can
darth_paul writes: Flint: Damn, now I've got to raise her all over again! I'm too old for this S**t!
Heavy B writes: i poop my pants
- Back to top -
Roadshadow writes: The TF cleverly disguised as Marissa's raygun: Dammit I'm not ready for babysitting yet!
battlestrike writes: woa hoe hoe!:) how much?
Primus C-00 writes: A million paedos spatter their pants...

(|¬_¬|)
Judynator writes: Megatron: Wohoho! Human in buff, yeah! *gasping* :-PPPPP
Tiedye writes: This is what happens when you take shots and play strip poker at the same time. Learn form her mistake ladies!
trailbreaker writes: DIRTY PHOTOS! CLOSE YOUR EYES!
Castle74 writes: Ummmm....don't sites get shut down for pics like this?
Castle74 writes: Next on Dateline......Internet Predators Part 10
Unknown writes: Mikey likes it!!!
BluavalancheZ71 writes: Hey that was a cheap shot!!
- Back to top -
Pokejedservo writes: There is a reason why the sudden need of re-age blasters has arisen and Flint's caution about it. ;)
snavej writes: Marissa: Monkey fudge arse bracket!

Hapless Spotty Teenage Worker: Mr. Johnson, it happened again!
Galaxy_Convoy writes: To make a proper caption for this, I must quote Brian off of Family Guy.

"Wrong! Wrong!"
Grendel writes: "I want my G1 Megatron!!! WAAAAHHH!!"
Grendel writes: "I AM TRANSFORMED!!.........CRAP!!! HASBRO, WHAT'D YOU DO TO ME???!!!!"
Grendel writes: "And at Starscream's Daycare, we take pride in being the only daycare center with a fireing range and 'Little Con' brand laser weapons, for all the little kiddies to enjoy!"
NOBODY LOVES WHEELIE writes: Janie's got a gun,Janie's got a gun.Her whole world's come undone.From lookin' straight at the sun
What did her daddy do?What did he put you through?
They said when Janie was arrested.They found him underneath a train,but man he had
NOBODY LOVES WHEELIE writes: Hasbro Executive," MY GOD SOMEONE GET THIS CHILD A 1-2-3 TRANSFORMER! Hook'em while their young.....like cigerettes."
NOBODY LOVES WHEELIE writes: WHOA! WHOA! WHOA! United States Child Safety Services here we're gonna hafta take that toy Shockwave gun away from that kid. It is wayyyyy to realistic looking.
cybertron2006 writes: Marissa: Hey! whose gun is this?
Cyberblast prime: SHE CAN TALK!
- Back to top -
Death-Ray Charles writes: Next weeks "Before Carly" pic?
Heavy B writes: what the hell happened last night
Rampage writes: WHO FARTED?
ReinaHW writes: When Marissa tried out the new and improved wrinkle cream, she didn't read the fine print on the back of the jar which clearly stated: Do not use if under 40 years of age, do not use if using energy powered weapons and do be sure to have spare cloth
Onyx Prime writes: Meanwhile at the Neverland Ranch....
snavej writes: If only she had taken out the vibrator earlier, she wouldn't have had that unfortunate damage.
snavej writes: Marissa had a thumb-sucking problem - she couldn't get the thumb into her mouth.
snavej writes: Marissa: You call this day care?

Decepticon guard: No, I call it a holding pen in a death camp.
Lapse Of Reason writes: Looks as if Marissa lost the BrEAST WARS!
NOBODY LOVES WHEELIE writes: Young Marissa lost her parents in a plane crash she was found and raised a Transformer, and.........My go this joke stinks.......THE LEGEND OF TRANZAN!
- Back to top -
Zeedust writes: She's not exactly minus her clothes... They're just a couple dozen sizes too big for her. Yeah, I know, nitpick, nitpick... But I don't feel comfortable talking about this picture tonight. Anything I try to make jokes about just gives me
Zeedust writes: Is it just me, or have the caption contest pics gotten creepier and creepier over the past three weeks? You're scaring me, Ryan.
Fireblast writes: I swore they were bigger.
NOBODY LOVES WHEELIE writes: Narrator's voice,"It is the year 2005, and Michael Jackson's child molesting habits have grown to epic proportions."

Narrator walks on screen.
"Marrisa is just one of millions of innocent victims of Michael Jackson. She has no
NOBODY LOVES WHEELIE writes: Marissa,"Oh come on I am NOT attending school again, but then again I do have a laser gun.....I'LL SHOW THOSE CHEERLEADERS WHO'S POPULAR!!!!"
snavej writes: No, don't look at me! I'm shy!
snavej writes: If someone had warned me they were planning to do this, I could have prepared by bringing some diapers!
Acelister writes: Finally, the moment fans have waited for... Nude pictures of Marissa!
Road Turtle writes: Babies, and high-powered energy particle blasters of death don't mix.
Road Turtle writes: Somewhere, someone is singing, "I like little girls, they make me feel so good. I like little girls, they make me feel so bad..."
- Back to top -
Road Turtle writes: Curious as to how Soundwave and his Cassettacons 'Mass-Shift' into tiny archaic analogue devices, Marissa attempts to mass-shift herself; with disastrous results .
MercilessOne writes: Bears it all.......
NOBODY LOVES WHEELIE writes: ALRIGHT, ALRIGHT WHICH ONE OF YOU IDIOTS LEFT THE BABY UNATTENDED?
NOBODY LOVES WHEELIE writes: Both hands on the keyboard you sick freak!

YEAH YOU! YOU KNOW WHO YOU ARE!
NOBODY LOVES WHEELIE writes: Suddenly Ryan's cpu was seized for child porn.
CyberTooth writes: "While we acknowledge some of these pictures are easy to make vulgar or obscene comments to..."
Zeedust writes: Prime thought "lolicon" was just another Decepticon subgroup until he learned the shocking truth.
Thanatos Prime writes: Notice how she's trying to cover her face before anything else...
1337W422102 writes: Next week...
ADULT MARISSA MINUS HER CLOTHES, only at Seibertron.com!
dabattousai writes: Due to demand for a topless Marissa, the company decided to do it the censorship way.
- Back to top -
ZaberFang writes: Hot Rod: oO.......This is SO wrong!
Thanatos Prime writes: My hand smells like anti-aging cream...
The_Fortress_Maximus writes: Observer: Quickly time displacement, make her an adult again...oh please, oh please, oh please.
Zeds writes: Me Marissa think this should not be!
cybertron_megatron writes: Optimus Prime: Bloody Starscream. I knew he was the dodgy type...

Baby Marissa: Waaa.....
Shadow of Lio Convoy writes: Galvatron: OMFG she is in her birthday suit
First-Aid writes: I never wanted to do this for a living you know. I...I...I always...wanted to be...a LUMBERJACK!
PG13 writes: Top Story from News at 11

Young child left behind at line to new Transformer Movie
cybertron2006 writes: MARISSA: OH MY GOD! I'M A NUDIST!
HOT ROD: LET'S KILL HER!
O. Prime writes: I knew I shouldn't have taken the pill from that smelly guy.
- Back to top -
snavej writes: My mama lets me play with high-powered laser guns from Cybertron! I think she feels sorry for me because I am ginger.
Velos writes: Whoa, What was in that drink I had last night.
MechaRaptor writes: 'Oh my god,I'm topless!!!'

This was not the fan-service that all the marissa fans had hoped for.
- Back to top -