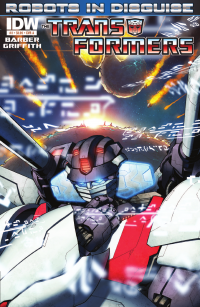 With the hectic business of setting the scene on Cybertron out of the way, Transformers Robots In Disguise reaches its third issue and it’s Wheeljack’s turn to be the star, in what is essentially a stand-alone issue, but the political machinations of the planets new governing body are never far away…

...Bay's Turtles reboot really has turned them into aliens!

Firstly though, let's discuss the art. With any visual medium, there is a fine balance between detail and clarity and for one to work the other must be just right, and vice versa. Unfortunately, Griffith and Perez have missed the mark a bit here. In a bizarre effort to make their characters actually look their 6 million years of age they have made some minor alterations to characters such as Prowl that really stand out, but only kept them for a portion of the book. Looking at Prowl’s face and helmet, the micro-detail added in certain shots, but left out in others, is a bit bewildering and largely distracting. Dirge is also affected by this (as are various other aspects of this issue,) whereas Metalhawk appears to be fine without it, as is the equally as old Bumblebee. I’m all for realism in my cartoon space robot adventures, but consistency is a must, and its sudden halt makes little sense.

Josh Barbers story itself is entertaining. A well woven story arc expanded with a self-contained event, the staple of the bigger Marvel arcs back in the day, this one focuses on Wheeljack. Returning to his tried and tested role as creative and scientific genius, 'Jacks is tasked with puzzling out why parts of Cybertron are spontaneously exploding killing Autobot and Nail alike, whilst those around him fall to their existing prejudices as one side blames the other for these giant explosions wreaking havoc to the re-growing planet.

He has a clipboard! What else do you need to do SCIENCE?

Also (re-)introduced to the comic are the Aerialbots and the Conehead Dirge, last seen kicked through a space bridge back in AHM#7 and none too happy about it either. These returning characters allow Barber to expand on the feelings of those who just can't let go of the great war, and in exploring Silverbolt's blinkered treatment of Dirge and his inability to let millennia of war go, it demonstrates that even the 'good guys' will still hold grudges long after the war is ended.

7zark7 has had better days.

This is a good, but not spectacular, issue. I truly dislike the introduction of 'generic' characters just to kill them in the second scene (and MTMTE is also guilty of this) as I think it lacks impact and imagination, especially when there are so many characters to choose from and IDW were quite happy to kill off known characters in the last two issues. Correction: It would appear Barrel Roll does previously exist, albeit as a Minicon from 2010.
Looking past personal gripes though, in trying to weave a complicated and lasting story, Barber has succeeded on many counts - the subtext of Starscream's involvement with Bumblebee's government leaves us puzzling over his real motives, the disagreements within the Autobots themselves continue to add depth to the story and Wheeljack is his usual likeable self, all of which give us an enjoyable tale, but you just can't help but feel slightly let down on those few minor but hard to ignore details.

The weakest of the three books so far, although this is still a great improvement on many of the stories of the past few years and so I can confidently say that those who are into this RID series will still enjoy, although probably not love, this issue.


Correction: It would appear Barrel Roll does previously exist, albeit as a Minicon from 2010.