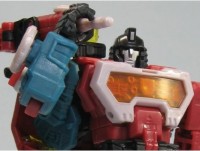 emgo316, The Freakin' Geek, has posted a video review of Reveal The Shield Perceptor on YouTube. In it, he discusses the good and bad of the figure. We also get some size comparisons to G1 Perceptor and some other figures. The transformation looks pretty solid with lots of pieces locking into place. Check it out below. Figure out what side you stand on: Microscope or Truck(with treads and stuff)

We am gots...we am gots.
Re: Video Review of Reveal The Shield Perceptor (1147919)
Posted by Carnivius_Prime on November 18th, 2010 @ 9:41am CST
Well, he looks well made but just doesn't interest me. Speaking of Generations type figures I did finally buy Darkmount (I can't call him that, he's Lord Straxus darnit) and am pretty happy with him. Just wish he was voyager sized and if his head looked more like the comic version (the comic one looks more sinister and the toy head looks a bit goofy) but overall quite happy with how solid he feels and the lil clip on weapons. Enough so that I might get Skullgrin despite wishing he was like Gen Thunderwing and RotF Bludgeon in reflecting his old Pretender shell (a vague ram skull resemblance on a retool head isn't quite what I mean) and have them as axe-wielding twins.
Re: Video Review of Reveal The Shield Perceptor (1147930)
Posted by Wheeljack35 on November 18th, 2010 @ 10:03am CST
I'm not a fan of the treads he should of just been a SUV but I do like him
Re: Video Review of Reveal The Shield Perceptor (1147967)
Posted by dkreed7 on November 18th, 2010 @ 12:22pm CST
What is it with all the G1 autobots in generations and reveal the shield? I'm not complaining i love most of them, but i would of like to have seen some decepticons in the lines, especially shockwave, cybertronian starscream and a universe style soundwave just as some example ideas, the lines seem to have too many autobots to decepticons. Hopefully the next waves will feature some G1 fan favourite decepticons, and hopefully a G1 shockwave which is loooooonnnng overdue!

Re: Video Review of Reveal The Shield Perceptor (1148063)
Posted by Down_Shift on November 18th, 2010 @ 6:47pm CST
Review started off lame and ended very lame but for the most part a very good review. I love how much chrome is on there AND I love how BAMF he looks with his G1 gun. I was convinced the legs were just that lame fold down the side nonsense but there's more then meets the legs with those legs.

Now that we know how those arms work, I'm more inclined to think that his remold will be Trailcutter because of the way the hood sits on the back. Much like Sunstreaker & Sideswipe.

I'm also feeling a good Botcon remold into Soundwave. It's got mad potential. I'm glad I got mine on preorder.

Just thinking back to the G1 gun in his hands, I'm now super pumped about Kup. If he can sport his G1 gun like Perceptor then I'm happy as I can get.
Re: Video Review of Reveal The Shield Perceptor (1148109)
Posted by Doctor McGrath on November 18th, 2010 @ 8:33pm CST
Perceptor looks amazing! That is about as perfect as it gets in my book. He even can hold Blurr's rifle, sort of lol. I am a little worried about his swivel type shoulders but they should be fine. I can't tell you who I'm more excited about now...Jazz, Wheeljack, or Perceptor??
Click here to view additional comments about this topic at the Energon Pub Forums ...