And just in time for the World Series ... 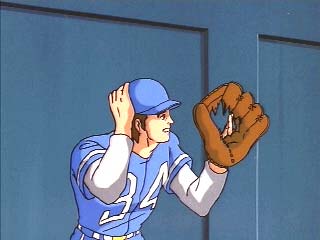 197 captions have been posted for this image so far ...

Teletran 1: "How about a ncie game of chess?"

Spike: "I wish it wouldn't s
- Back to top -
Defcon writes: Looka me! I'm Tarantino!
Nenesis Prime writes: DAMN INSECTICONS!!!
Soda Pop Kurtis writes: I think Barry Bonds is most definitely lying about them steroids.
Kal-Seth writes: Ladies and Gentlemen the Yankee's
Castle74 writes: Once again Steinbrenner has picked up another up and coming all-star the minute he saw Megatron.
Castle74 writes: Meanwhile in the outfield of Shea Stadium...Lady Fate has struck again!
Tiedye writes: "Oh my God, I can't belive I'm still alive!
Tiedye writes: "Maybe I should have missed that one on purpose."
Unknown writes: "This is the last time I play ball with giant transforming robots."
Optimus Prime, Jr. writes: PLAYER: Hey, ump! Where in the rules does it say that the Pirates can have Autobots on their team?!
You must be stupid as well as blind! This is baseball, not The Transformers!
UMPIRE: (unintelligence because it's in Japanese)
PLAYER: I SAID
- Back to top -
Unknown writes: megatron: you make the NY YANKEES LOOK GOOD
Jetplague writes: Duuhhh, oh! Thats why the glove don't work. Hahahah...There's a hole in it! Oh shucks....nar-ahahar! Hey look I can see my fingers! Tee hee Hee!

" Prime? Can I pleeeasse shoot him now? "
Unknown writes: Player 34: "Thank god the batter didn't hit the ball low"
Unknown writes: Thundercracker: I,m glad I did that. The Yankees remainded me of the Autobots: They always win. We Decepticons are Mets fans! (PB is a Yankees fan)
Metrotitan writes: Megatron yelling from his seat: Hey 34,You Succckkkkkkkkkk!!!!!
overdrive writes: commentator: "i'm no expert but that's gotta hurt"
Unknown writes: MY HAND! MY HAND!!!
zach writes: Spike: That ain't fair their freakin 100 feet tall. And their using firearms
Derek Jeter:And I don't?
zach writes: Catcher: Talk about a hard throw.
Pitcher:Wasn't me!
Catcher:Then who was (sees Megatron) IT(in squeky voice.
Zu Darkness writes: Ummm Damn I guess I better be thankful that I still have all my fingers.
- Back to top -
Storm Shadow writes: "Note to self"....never AGAIN joke about a Decepticon's aim.
PredaKing writes: Yeah, another "Hole-in-one!"
Taintedsoul69 writes: Note to self- NEVER ---- that batter off again.
Shadow Fox writes: Heh..that's funny..I'm pretty sure I'm supposed to have a few fingers where that hole is.
Deceptiman writes: Galvatron: Yaarrgghh! *rip* Oops. Spike: Galvatron! You Incompetent fool! You Are Supposed To Throw the ball so i can catch it. not so it goes through the glove!
Unknown writes: Prime: Bumblebee! You incompetent fool! I sais the Head, not the hand!!!
Longshot writes: Just call me Mr. butterfingers.
Unknown writes: BBBBBBBBBOOOOOOOOOOOOO!!!!!!!!!!! YANKEES LOST!
Unknown writes: Spike: "That's the last time i play baseball in disney land!" Stitch: "Homerun!"
M writes: Spike: "CRIKEY! I'VE LOST MY MOJO!"
- Back to top -
Unknown writes: Sorry about the earlier posts, my computer is pretty crappy!
Unknown writes: Spike: "Say hello to my friend named MR. Glove! Toss the ball, Darth Vader!" Vader: "Do not underestimate the power of the force!" Woosh! CRASH! MR. Glove: "Y
Unknown writes: Spike: "Say hello to my friend named MR. Glove! Toss the ball, Darth Vader!" Vader: "Do not underestimate the power of the force!" Woosh! CRASH! MR. Glove: "Y
M writes: Forget that last post. You can't play Gameboy Advance SP with a glove like that.
M writes: WHOAH! I played advance wars for so long that my hand-sweat burned through my mudda-fuggin' glove!!
Unknown writes: Now...let's see Hideki Matsui's...finely tuned laser breath.
Maestro writes: Everytime you make a fart joke god kills a kitten
Lily writes: Oh, so THAT'S what happens when you use a torpedo as a fastball.
Maestro writes: Megatron Goes Pro
Unknown writes: Megatron Real Purpose
- Back to top -
NOBODY LOVES WHEELIE writes: Well I for one am glad to see FOX has beefed up The World Series by including fatal injuries as a no time out.Now if we could just do something about the DH rule.
Unknown writes: Homer style:hmmmmmm 50 dollar leather glove (drool)
Unknown writes: "Mom said I'd go blind if I didn't stop that she never said anything about this!"
Unknown writes: Ummm, can someone else play against the GIANT FREAKING ROBOTS!
Vector Sigma writes: Whoa so that's what acid does...
Unknown writes: Insert not so clever comment here
M writes: "MR HAT!!"
Unknown writes: Aw crap...when dad fines out I'm gonna be in so much ----!!!!!!
Unknown writes: For somee time now he had considered retiring,fate sealed his decisionn
Unknown writes: Take one for the team? Are they out of their freaking MINDS?!?!?!?
- Back to top -
Unknown writes: Whoaaaa.... GOOD fastball, Bumblebee!
Unknown writes: Damn, that was one hell of a fast ball! :)
tremor3258 writes: Playing baseball from the air with automated weapons! Now THIS is a sport!
Unknown writes: i could have eaten my hat but nnnnoooooo!
NOBODY LOVES WHEELIE writes: "And it's outta here and so am I."
Minicle writes: Swines! They told me only number thirteen was unlucky!
Minicle writes: Decepti-chilli-con Carny.
It goes straight through you!
grimlock writes: Spike: AAAAAHHHH!!! My hand!! My haaaaannnd!!! Grimlock what did you do to my hand?!?!?!