Rumble on a Subway train 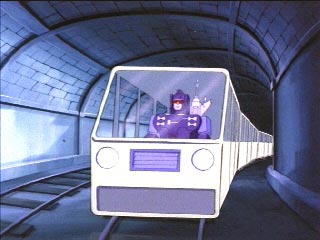 484 captions have been posted for this image so far ...

The caterer onboard this train? Subway...
Warhead writes: i got a job
- Back to top -
Zeedust writes: Rumble (Singing): "Runaway train, never comin' back, and then something that rhymes with 'back,' seems like this song is going nowhere, don't know the words and I don't ca-are!"
skylines prime writes: SWINDLE: How the hell do you drive this thing?

SOUINDWAVE (VOICE): Where the hell are you? Megatron is friting my ash out here?

SWINDLE: I can't talk and drive at the same time
Ageless Stranger writes: who would of thought taking the subway would be faster than flying
Masterpiece Prowl writes: (singing) Take that last train to Clarksville and I'll meet you at the station.
(normal voice) I forget the rest.
Greg writes: Just Like Driving A Toy Train...
Apart From They Had Brakes On The Model One!
Nenesis Prime writes: Is this you, Astrotrain?
Nenesis Prime writes: If I don't win "Jackass of the year," no-one will!!!
Brakethrough writes: "Will I see you toniiiiight...On a downtown traaaiin...sigh, I miss Frenzy."
Alphatron writes: Rumble: I hope this leads to the Auto-Bot base... or maybe a Pizza Pizza.
Operation Ravage writes: In the year 2006, his former job taken by Ratbat, Slugfest, and Overkill, Rumble was forced to find a new profession to make ends meet.
- Back to top -
Great Red Spirit writes: Rumble's Dream Job
Soda Pop Kurtis writes: Rumble: If you thought working for Megatron was bad, you should try working for the New York MTA. I knew I should have joined the union.
Zeedust writes: Rumble: "I still don't see how I'm going to lose weight this way..."
Kal-Seth writes: New From Fox It's Tranformers Common Low-class jobs see your favorite transformer sin degrading jobs and watch them contimplat suicide
Kal-Seth writes: Soundwave after deciding to get breast implants deciding those in his chets needed a fats way to eject
Nightshadow writes: Rumble: ph3r us, we are all powerful, we are 1337, i am riding the 1337 Train!
Crushed Guy: ...Shutup your just saying that cause your on Megatrons P.I.M.P. train.
Castle74 writes: As hard times fell on the Decepticon Army, many Deceps took on second jobs. Here's Rumble operating the monorail at Disneyworld. (Notice the smile as he works!)
Magnus writes: "My baby takes the mornin' train. He works from 9 to 5 and..."
Tiedye writes: RUMBLE-(Singing)- Rolling,Rolling,Rolling, Keep the trains a roll'n. Rolling,Rolling,Rolling Roll Back.
Tiedye writes: "ChugaChugaChugaChuga ChooChoo"
"ChugaChugaChugaChuga ChooChoo"
- Back to top -
Tiedye writes: "Megatron told us to gather at his position, but I prefer to take the train then run."
Unknown writes: Pop Quiz Hot Rod, there is a bomb on the Subway, if it is inhabbited by Autobots it'll blow, if one person steps off it it'll blow, if Rumble Steals it, It'll Blow *BOOOOOOOOOOOOOOOOOOOOOOoooooooooooooooOOOOOOOOOOOOOOOOOOOOOOM*
Unknown writes: "All a-board, the Chat-ta-noo-ga choo-choo..."
Rainbow Starscream writes: Rumble: All right, that's it. That's the last time I play paper-rock-scissors with laserbeak!
Optimus Prime, Jr. writes: "Larry better make sure he doesn't run into me at Groovy!"
Unknown writes: Rumble: 'Afternoon, customers. This the the blue line, in the direction of Iacon; next stop: Crystal City...(to himself) Hehe...if the conductor should take a tumble, look out, chump, 'cause here comes Rumble...
Constructicons writes: Rumble: train, train, take me away, train, train TOOT TOOT!
Centbot writes: Rumble: and now, nothing can stop me from creating my secret army...of mass-production golf carts!
Unknown writes: After being fired by Megatron, Rumble joined the noble MTA crew.
Mephisto writes: Rumble: Weeeeeeeeee!1111111
- Back to top -
NOBODY LOVES WHEELIE writes: FREE AT LAST!
Pokejedservo writes: Rumble (thinking): I'm almost beginning to wonder, what ran longer? This Caption Contest or my VA Frank Welker's career?
M writes: DUCK, JACKIE! DUCK!!
Superspider911 writes: Purple? Why am I purple? And where did this train come from? Who are you people looking at me? I need my therapist.
NOBODY LOVES WHEELIE writes: Rumble,"I've been down here so long I'm start'n to hallucinate I could swear I just saw Minicons dragging a red wagon fulla meat.And did Seibertron reformat or am I just losin it,AAARRRRGGHHHH GET ME OUTTA HERE!!!!!!!!!
Unknown writes: I found how to make it move forward... now how do you steer this thing? *looks around for the manual*
Unknown writes: Seibertron.com - featuring Rumble in the world`s longest running "ultimate caption contest" pic. Guiness would be proud.
NOBODY LOVES WHEELIE writes: "DAMN,this is one clean subway.What does daylight look like I've been down here so long I forget."
Jade writes: I have to pee!
Metrotitan writes: "Yep, this is living. Got a 9 to 5 job, operating a subway train, while supporting my wife and 2 beautiful kids. Uh-huh, yesiree, i am loving it.

Soundwave's gonna KILL me if I don't find my other rifle!
M writes: "FIRRIB" actually stands for "Frenzy is red, Rumble is boned." Muahahaha!!
- Back to top -
SMYTE9 writes: *taunting/Singing*